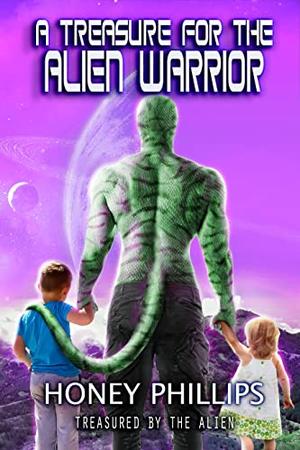 A Treasure for the Alien Warrior (Treasured by the Alien #8)

Can an alien commander allow himself to choose love over duty?

Jessica’s orderly life changed forever when she became the guardian of her orphaned niece and nephew. She is still trying to learn how to be a parent when they are taken by aliens.

After a desperate attempt to escape their captors ends on a deserted planet, she faces an entirely new set of challenges. The appearance of a massive alien warrior and his crew offers a chance of rescue, but she also finds herself irresistibly drawn to the stern male with the kind eyes.

After the plague that devastated his race eliminated his hopes for a family, Commander Vadrar dedicated his life to preserving order in the Confederated Planets. When the pursuit of an enemy goes disastrously wrong, he is shocked to discover a small group of precious females and children fighting for survival.

As they work together to find a way off the uncharted planet, he grows increasingly captivated by the alluring human and her enchanting children. His duty compels him to return them to Earth, but his heart tells him that Jessica and her children belong with him. Can he ignore a lifetime of responsibility and ask them to stay?

Each book in the Treasured by the Alien series can be read as a standalone romance. This sweet and steamy HEA is intended for adults only.

The 'Treasured by the Alien' series

Similar books to 'A Treasure for the Alien Warrior'

More books like 'A Treasure for the Alien Warrior'   ❯

All books by Honey Phillips  ❯

Buy 'A Treasure for the Alien Warrior' from the following stores: