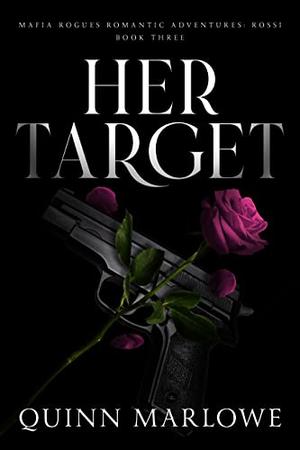 Penny Lane. My lawyer's sister, and a girl I've rarely even talked to in person. Best friend to my brother's wife.

Good girl in every way, from her blond ringlets to her rosebud mouth.

And my new assistant.

I don't know why she's here or what made her think accepting the job was a good idea, but from the moment she walks into the office, I know two things: First, I don't trust her. She's a terrible liar, and she's definitely up to something, though I don't know what.

Second: She's getting under my skin in a way no woman ever has. And by 'under my skin,' I mean making me think of every single thing I could to wipe that good-girl shine right off her. Every place I could take her, every word I could whisper as I...

Of course, I made that rule before Penny Lane walked into my office and accepted the job I was throwing at her feet.

Her Target is a swoonworthy romantic adventure that features enemies to lovers, a girl who doesn't know what the hell she's doing and a guy who knows exactly who and what he is, spying, intrigue, hi jinks, kidnapping, guns, and plenty of sexual tension, and is the first in the Penny and Michael duology of Mafia Rogues.
more
Bookmark Rate Book
Amazon Other stores

Similar books to 'Her Target'

All books by Quinn Marlowe  ❯

Buy 'Her Target' from the following stores: