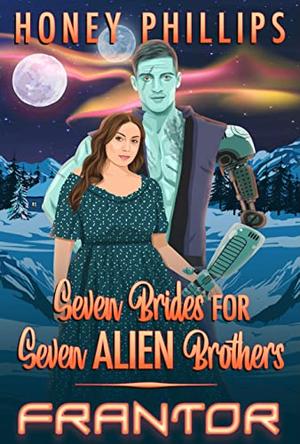 Can a lonely woman heal the cruel scars of an alien warrior’s past?

A terrible war left Frantor scarred in body and soul. Now he hides on the isolated ranch he shares with his brothers-in-arms, determined to conceal his disfigurement.

In the midst of a raging blizzard, he finds a beautiful human female on his doorstep. He is irresistibly drawn to her but insists on concealing his appearance, even as they grow closer.

Florie has worked hard to establish her business, only to end up alone. Then she finds herself trapped with a mysterious alien warrior. He refuses to show himself, coming to her only under the cover of darkness.

Behind his gruff manner she senses a loneliness which matches her own, and his gentle touch stirs long forgotten feelings. But how can she hope for a future with someone she cannot even see?

When danger threatens the ranch, Frantor can no longer remain in hiding. Can he finally break the chains of the past?

Each book in the Seven Brides series features a different couple and may be read as a standalone, but the books do link together. This sweet and steamy series is intended for mature readers.
more
Bookmark Rate Book
Amazon Other stores

All books by Honey Phillips  ❯