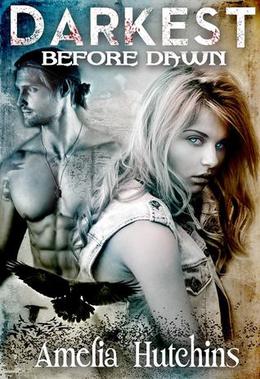 Darkest Before Dawn features a warning before the first chapter, promising readers a “panty-soaking” ride. The warning also features two egregious grammar mistakes, and the pinky-swear of a happy ending for this book. Basically, it gives away everything that the book will prove to be in the space of about a hundred words.

Sponsored links
The story follows Emma, a trainee nurse, after the outbreak of a virus which wipes out much of the world’s population. Forced to fight, pillage and kill to survive, she and a small group of survivors band together to protect themselves against the violence, moral anarchy, and rape that’s now pervasive across the country. Then Emma meets a mystery man while out hunting, and everything changes.

Look, let’s get this straight; there is some good stuff in Darkest Before Dawn. I think the science-fiction concept remains relatively untapped by romance novel writers, and the whole post-apocalyptic virus thing is pretty cool and executed in an interesting way (we skip straight from the virus hitting the USA to Emma and her family and friends camped out in their complex, throwing us right into that creepy, half-dead world). Unlike many Mary-Sue characters who have their worth proved by having other characters tell the reader just how beautiful/intelligent/funny/brave they are, Emma shows that she’s a smart, capable, occasionally ruthless woman fully able to look after herself, which is absolutely a good thing. The story isn’t too terrible either, vastly driven by the realities of the virus instead of a swooning heroine, with surprisingly brutal scenes of survival.

But there’s quite a bit wrong with this book too. For one, I have a real problem with virginal characters referring to themselves as “sluts” or “hussies”-the latter of which seems to happen pretty much every chapter- when they find themselves getting sexually aroused. There’s nothing particularly sexy about a woman who attaches negative, shaming words to her own sexual satisfaction. Similarly, in the first chapter, she criticises an old high school friend for getting pregnant and not graduating (despite, confusingly, Emma claiming she’d been present when she’d got the contraceptive shot, showing that she did take precautions and just had a ton of bad luck). I get that you’re a strong, independent women, Emma, but no need to sneer at other women’s life choices to get you jollies, alright? In a later scene, two women who were hitting on Emma’s mystery man who Emma described as sluts wind up brutally murdered and raped on a couple of pages later. She refers to her best friend as a slut for going down on a guy. This kind of shaming is annoying and all-too present in a post-50 Shades world of adult romance fiction, and it’s not empowering. All it does is argue that women like Emma- who have remained virgins until the “right guy” comes along- are worthy and decent heroines, while sexually active women are relegated to supporting characters or villains, vilified by the heroine for their “sluttisnhess”. My panties remain unsoaked.
Add to this Emma’s annoying tendency to explain the tone of everything she’s said, and turn every ounce of subtext into a wall of text, and she’s the seed of an interesting character lost inside the over-knowingness of the author.

And then there’s Jaeden. Jaeden is a pretty much cut-and-dry romantic hero, one who comments on how precious and rare women like Emma are, and proceeds to try to hook up with her at every available opportunity (even when there’s a baby in the room). I guess that this book will land under “dubious” consent for some of the sex scenes, but I’m not a big fan of the heroine being basically kidnapped, then informing the hero to stop only to have him ignore her and carry on. The other problem with Jaeden is that he talks like romance book prose. I sincerely doubt that anyone ever has spoken to their lover the way he has and while, yeah, I understand that this is fantasy, his dialogue comes across as a copy-edited Heathcliff knockoff. There’s a certain clumsiness to sexual tension scenes that aren’t present in the rest of the book; like when Emma hears her mystery man say her name for the first time and it ricochets around her body in a most curious and unappetising way. And when it comes to the actual sexual activity bits, it’s all slightly non-consensual and dubious, and a lot of Emma’s sexual encounters (not all of which are with Jaden, refreshingly) seem to end with her saying no.

The supporting characters aren’t too bad- in particular, Emma’s best friend Addy has her charm and seems to be a far more appropriate heroine for a book of this nature (comfortably sexual, smart, brave), and Lachlan, the werewolf who takes a fancy to Emma but remains secondary to her vampire crush (which bears no resemblance at all to Jacob from Twilight) is endearing and entertaining to read.

Let’s be straight here: this book owes a debt to both 50 Shades of Grey and Twilight. The strong, dominant man and the virginal girl unschooled in the ways of a dom relationship, as well as the very specific phrase “kinky f*ckery”, is lifted straight from 50 Shades, while the vampire/werewolf subplot that arises about half-way through the book-completely derailing any of the cool science-fiction stuff that had been going on before- is from Twilight. I’m not saying that authors shouldn’t allow themselves to be influenced by hugely popular works of fiction in their genre, I’m just saying that the similarities shouldn’t be quite as obvious as this. The author even name-checks both books at various points in Darkest Before Dawn, seemingly to deflect any accusations of plagiarism with a nod and a wink.

The one thing she has got right, though, is her heroine, who’s better than both Ana and Bella combined. She stills holds onto those uncomfortable slut-shaming proclivities, but she’s a competent woman who can hold her own in this dangerous landscape whenever she’s given the opportunity to do so.