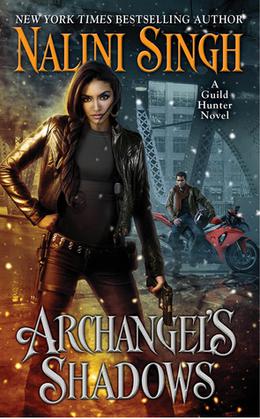 Have you ever read a book about vampires and angels, or vampires or angels that don’t make you tilt your head back and groan at how unrealistic and cheesy the story and the writing is? Instead, it makes your eyes glued to the pages of the novel in which you’re reading, soaking in every little bit of the story, and also makes your nether region swell in anticipation. If you want to read a novel that will do exactly that, then you will be pleased by Archangel’s Shadows.

Sponsored links
In Archangel’s Shadows, the novel starts off with one of the main characters, Guild Hunter Ashwini and her vampire named Janvier, investigating a few surprising murders that have been going on in New York City a few weeks after a war took place with Lijuan. When they get notice of a dog that had been killed brutally, they go over to the crime scene. Now, there was something wrong with how it was killed, and that makes Ashwini and Janvier suspicious that Lijuan may be the cause of this murder, but that wouldn’t have made any sense because Lijuan is supposedly dead. So they investigate, and more murders of the same variety that the dog was killed pop up all over the place.

The narration of this whole novel was astounding, and it flowed rather nicely. The romance and chemistry between Ashwini and Janvier was perfect, but my only complaint about their romance was that I would’ve loved to read more about it rather than a lot of the other different characters points of view that only had to do with the investigation that took place during the book. The novel itself doesn’t really focus on Janvier and Ashwini and their romance—it’s more like a side-story with the investigation of the murders as the main story. A lot of the other characters also steal the show when I was reading it: we have Raphael and Elena, Dmitiri and Honor, Naasir, and a whole lot of other character’s whose stories the novel contains. Since I haven’t read the novels in the series that came before this one, it was a little confusing as to what was actually happening in the novel.

I did rather like Ashwini in this novel. Singh portrayed the whole strong heroine correctly, instead of the one that thinks that they don’t need any man in their lives or helping them. I could tell that Ashwini wants someone to hold on to, and I also loved that she knew how to fight and take care of herself. She was definitely someone that I would’ve loved being friends with.

Janvier I also liked. I loved how he was so taken by Ashwini, and treated her perfectly. He had no interest in other woman, clearly, and that lust that he felt when he first met her was still completely there. He was totally swoon-worthy, though it seems to me he’s a lot like other men that I’ve read about in romance books. You know the type: the alpha male, but that isn’t a problem for me! I almost feel jealous of Ashwini! However, the romance between the two we don’t really get to see all that much until the end of the book. We don’t get to see them getting it on with each other except for this one really steaming sexy scene in the middle of the novel that made my heart pound and soaked my panties, which I wanted a lot more of. I became a little addicted to that tidbit once I read it.

If I had to choose, then I’d say my favorite character in the story would have to be Naasir. He had me giggling in my seat (sometimes in public places) and I found myself anticipating every single scene that he was in, and that’s rather hard to do. Here’s a quote from when Ashwini, Janvier, Naasir, Raphael, Elena, Dmitri, Honor, and others have a dinner together:

“Do you change shape?” Her words made Illium erupt in gales of laughter, but Elena wasn’t put off. Legends had to start somewhere. Why not with Naasir?
“Of course,” he answered, then turned his body to the right and curled his arm into his chest. “See, I have just changed shape.”

The investigation in the book also intrigued me, since I usually really like stories like that. It made me want to keep on reading even though the novel didn’t hold my attention all that much. But I was able to get the gist of it once I really paid attention to the story and read more slowly. It also kept me guessing and wondering on what was going to happen in the end and who was causing these murders to take place. I couldn’t have guessed the ending of the novel without reading it.

Archangel’s Shadows was filled with action scenes and violence, but also with a mix of suspense, mystery, a dash of romance, and it will keep the reader enthralled through every word in the novel. If it did keep my attention, wasn’t as confusing, and have more romantic scenes between Ashwini and Janvier, then I would’ve given this novel a much higher rating and applause. I can ensure readers that do like this genre and like romance as a side-story in their novels will definitely be enthralled by this novel and love it.