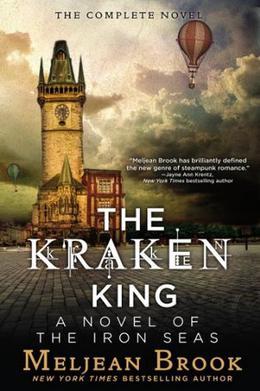 When it comes to fantastical fiction, there has to be a careful balance of fierce imagination and the author’s own skill. Take Margaret Atwood, or Arthur C. Clarke- they could weave places and stories that were utterly removed from literally anything that you’d ever seen or heard of before, but they did so with such blinding skill and grace that you barely noticed how ridiculous the whole affair was. However amazing and new and different the world you’re creating is, if you can’t convey that to your readers, the story is going to lose something. That thought is one of the first things that struck me when I was reading Kraken King. To be honest, there is a little bit of a sense of over-reaching at some points in the book. Meljean Brooke has created a really quite unique and fascinating world- there’s a healthy dose of steampunk inspiration there, as well as pirating, airships, and mythical beasts to boot- and occasionally the plot and the characters can get lost in that world. But broadly, I’d much rather a world that tried to push for too much- stinking with the smell of hacked-up kraken meat and dried-up mud and broken twigs-than settled for the discomforting, easy blandness that so many romance novels rest on at the moment. I’ll tell you what else I like, too: her leading lady. So often in this genre, the main female characters are nothing more than a Mary-Sue for the readers to sticky tape their faces to in their head- here, Zenobia is more than just lip service paid to the strong independent woman trope. For once, we’re shown, and not told, what an intelligent, witty, and engaging character she is. She’s a writer, adventurous but not naïve, willing to pass herself off as a widow so she won’t suffer at the hands of well-meaning companions throwing eligible bachelors her way (when they should clearly be aiming them at me). She’s a damn good character, and the third-person narration gives the story that little bit of removal that allows you to appreciate her as such. In fact, I’ll go out on a limb here (maybe not one of the delightfully grotesque kraken tentacles that Brooke sketches in so viscerally, but still) and say that I actually really dig most of the characters in this book. I appreciate a romance novel that’s not solely about the two leads, with everyone else shoved out to the sides to make way for their ONE AND ONLY TRUE LOVE. Ariq, who is that one and only true love, is a strong, interesting character in his own right, fleshed out with history, sympathetic without being pathetic. And his half-brother Taka provides an intriguing subplot of his own that intertwines with but doesn’t rely on his sibling’s story. I can picture the periphery characters in my head, even just vaguely, which is more than I can say for the roughly human-shaped silhouettes I see in similar books. These fleshed-out characters also mean that the chemistry between the leads is given a crackling, palpable chemistry, one that isn’t contrived or forced, but that springs up at the most inopportune moments. The sex scenes follow this trend, sexy without just spewing out lowest-common-denominator porn-star dialogue, with an interesting exchange of power that keeps things fresh. Reading those sex scenes-which, and let’s be honest now, are the reason a lot of newbies might pick up this book- isn’t disappointing, because they feel raw and real. Brooke has scored a serious victory in making these characters who are basically prancing about in a world that we can’t find much in common with our own pretty damn recognisable. And she deserves credit for that. Is Kraken King perfect? I wouldn’t say so. The writing style is, I assume, deliberately old-fashioned, and that can take a little while to totally click into. For me, sometimes the walls of text came across as a little bit clunky, and the writing was at it’s best when it meandered into the heads of it’s lead characters. And for a romance novel, it’s unusually dense with plot and intrigue- personally, that really does it for me, but for others looking for a quicker, more recognisably modern fix of romantic fiction, this might not be your cup of mead. Summed up, though, Kraken King is a minor triumph. It’s memorable, in that it doesn’t patronise it’s readers or boil down any of it’s characters to one relationship or one other person. This is grown-up romantic fiction- clever, intelligently written, and teeming with little flecks of salty erotica that serve to spice up the story, not drive it. Meljean Brooke hasn’t created a book that’s utter perfection, but she has created one that combines ambitious science-fiction with toe-curling fun in a way that I would love to see pulled off more often. So, Madame Brooke, you have earned a fan, an admirer, and a reader. Well done on that.