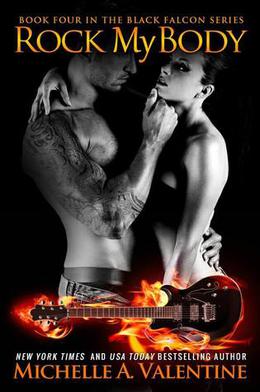 This book was a great find. Having not read the previous books I was a bit sceptical with the reviews that claimed that this could be a stand alone but I pursued it anyway and I'm glad I did.

Sponsored links
Tyke Douglas is living the rockstars dream. Sex, drugs and rock and roll baby! As bass player for the rock band Black Falcon's Tyke is sick of being the one left to organise everything just because all the other band members have hooked up, had babies or gotten married. Normally the most level headed of the group, he decides he's had enough of carrying everyone else and is now on a downward spiral of benders, run ins with the law and PR nightmares.

The band, and his twin brother Trip, have had enough of Tyke's antics. After blowing off another band meeting and walking out on rehearsals in a huff, Tyke turns up to the gig thinking every thing is ok only to find that they've replaced him. Rather than be told to leave, he tells them all he is done. After ramming his car into a concrete wall, the band tells him he either cleans himself up, or he is out, for good.

Francine Mead is a recovering sex addict trying to get her life back on track and has dedicated herself to helping others that are struggling with their own demons. As the new addictions councillor at a rehab centre, she's ready to use her experience and her training to help them find long lasting solutions to their own personal addictions.

In walks Tyke Douglas and in him Fran finds him to be the temptation that causes her to fall into a relapse.

I'm sure that I would have felt a deeper connection to the supporting characters had I read the previous book in the Black Falcon series but I'm happy to say that I formed a connection non the less with Fran and Tyke.

Their roller coaster relationship pulled at the heart strings and made me cheer them on as they faced hurdle after hurdle. There was a sub plot in there that I never saw coming, either because it was so well written or that I was so engrossed in Fran and Tykes journey that I never connected the dots.

For those of you who have read previous books, I think you will enjoy and even shed a tear at the ending of this, the last of the series.

I've given this book 4 stars, it lost a start because of a discrepancy I found which had me having to go back in the book but it didn't detract from my enjoyment.

This was a fantastic contemporary romance by author Michelle A. Valentine. It was clearly written and flowed well, and the characters depth was established throughout the book. I will be purchasing more of her books in the future.