The Darkest Touch (Lords of the Underworld) by Gena Showalter 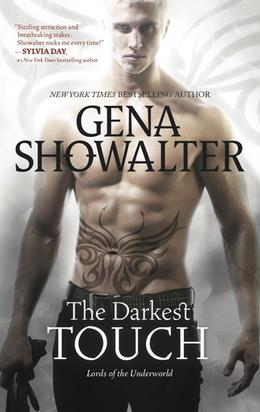 The Darkest Touch, #11 of the Lords of the Underworld series by Gena Showalter, starts with a good premise - Torin, one of the last of the fallen Lords is to have his story told. Torin’s tale is meant to be the fleshing out of this long-time background-character’s full story, something readers often dream about, but I’m sorry to say, in this case, the book falls short of the hoped for mark.

Sponsored links
This novel tries to be too many things, to encompass too many characters, too many supernatural powers, too many paranormal beings, too many worlds - it’s far too full and chaotic with far too much violent and gory killings, skinnings and delimbing for the reader to focus on the characters themselves. This is a shame, as Ms. Showalter does an excellent job describing the beauty of the two main characters. Turin being magnificently muscular with green eyes and white hair, and Keeley changing her hair and skin colours according to the seasons.

Ultimately, this book had great potential. The premise was an interesting one to work around. Turin, one of the Lords of the Underworld, had been possessed by the demon of Disease, so that any skin to skin contact caused the recipient to sicken and die, or worse, to become a carrier and spread the disease to others. It shows the skill of Ms. Showalter that she can surmount this seemingly impossible obstacle to hot, steamy sex by the end of the adventure.

The first third of the book is overly preoccupied with Turin and Keeley’s powers and enjoyment of killing everything and anything that they feel like ‘ending’. It takes far too long to get into Turin’s complex story, which, even by the end of the book, has still not fully been delved into. Keeley in her turn, comes off as a vapid, insecure being, though having far greater powers than Hades, ruler of the underworld, which is a rather puzzling way to portray such a strong and all-seeing and all-knowing woman.

Keeley and Turin take great enjoyment in torturing and killing most of the beings around them, for varying reasons. The initial emotional premise that sets up the tension between Keeley and Turin, despite the paranormal explanation, rings shallow as a device to bind these two bloodthirsty warriors on their innard-splattered journey through this novel. I found learning about Keeley’s past much more interesting than Turin’s, as hers was definitely fleshed out with more detail and connective incidents with some of the many secondary characters than Turin’s story was.

As for the paranormal aspects of this book. I will freely admit that 'The Darkest Touch' was my first paranormal romance. I was not looking forward to it, yet it began to grow on me and draw me in about halfway through the book. That’s not to say that cheesy lines like “I will skin you with a cheese grater and stuff your organs into a blender to make a smoothie”, did not go unnoticed or expressions like “pimpslapper” and “three douchketeers” did not detract from the flow of the plot line - because they did. The references to Batman, yes of Boy Wonder fame! were just unnecessary and really tugged the reader out of the fantasy the story was trying to spin. Instead, the paranormal elements of this novel should have opened a world of creativity, of situations and circumstances that could have and should have been very erotic, and mood enhancing.

Paranormal here was used for creatures and powers all with the endgame of destruction and killing. And, disappointingly, the paranormal, while creating a reason for Turin and Keeley to delay consummation of their powerful desires, did not feature in their lovemaking - no supernatural orgasms or tongue abilities abounded - just plain old mortal sex - great sex, mind you, with well described action - but nothing otherworldly was found in their bedroom.

Look, we all know that most romances are formulaic to begin with with. It’s a familiar drill - hot guy (with attitude), hot girl (who doesn’t know she’s hot), a complex reason they cannot or should not be together, and a powerful sexual attraction that makes a mockery of their self-control. Add in a few bits of jealousy, a few flirting scenes, a climactic scene where actual penetrative sex occurs, and finish with some belated self-reflection that leads to the declaration of undying, everlasting love. Now add to this tried and true recipe, a paranormal backdrop, and thats where this book gets dicey.

Paranormal fiction is a hot genre - fast growing, and popular not only in books, but on television and in the movies. Any type of fantasy writing allows an author a serious amount of artistic freedom and oodles of creativity just waiting to be exercised. But sadly, by the end of The Darkest Touch, the vast world(s) Ms. Showalter has created with the previous ten books are not explained with enough clarity so that if you were a first time reader you’d be able to keep up with the twists and turns and seemingly random rules of the paranormal.

Though we ultimately get the romantic, love-filled ending we crave, the overall cohesiveness of the book - the themes, plot, characters and secondary and tertiary characters, just don’t gel as well as they could have. Perhaps less focus on battles and on ripping the innards out of opponents, and more time spent fleshing out the main characters history and their specific powers and weaknesses would have been pages better spent.

Ms. Showalter works too hard giving details about so many other otherworldly things that it ends up detracting from the main feature - the love story. While the sex scenes are divine and really portray the extreme control Turin tries to exercise to protect and prevent his touching Keeley, not enough time is spent on the small seductions - the touches and glances that make the reader burn for their coming together, because how can Turin and Keeley do those things while they are busy chopping heads and getting burned with brimstone?

There is so much bloodsport, that it is hard to remember that this book is meant to be a romance, until the last section when Turin and Keeley return to Budapest to join the rest of the Lords and their women. A clear backdrop or summary of the background of the paranormal happenings of the series (or a quick story arc) would have certainly made this book more accessible and enjoyable for new and returning readers alike. It certainly would have made the tale more navigable, and would be a welcome addition to the glossary that was included at the end of the story in helping to keep the characters and their relationships straight.

I am however, interested to go back and read Ms. Showalter’s earlier works, as perhaps they are a simpler and more straightforward introduction to her created worlds. Now that I have some grasp of the parameters of paranormal romance, I’ve learned that there are no parameters, one just keeps flying with the action and the imagination of the author for as long as they are able to suspend your connection to reality and logic. Included in my copy were teasers for another one of her “Lords” series, and even that short peek into another paranormal ‘world’ helped me to understand the book I had just finished a little bit better.

Too bad it came after the story was over.