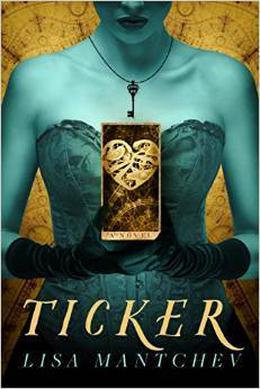 Ticker is a lovely book.

It is an excellent example and introduction to the genre of Steampunk.

Lisa Mantchev weaves a simple, entertaining, futuristic Victorian adventure story that holds the reader's attention from the start. Not only can you devour this consistent novel in one sitting, you will be delighted by the whimsical machines - the old-yet-new mechanical devices that enrich the and bedevil the lives of the main and secondary characters. You will finish this story with a newfound appreciation for the creativity and imagination of the author. Everything about this novel is exquisitely turned out, from it’s spunky heroine, it’s quietly reliable hero, to it’s heartfelt (pun intended) conclusion. It is a well thought out, well written, action driven romp.

Our heroine, Penny, a 16 year-old copper-curled daredevil with a mechanical heart, is caught up in the events surrounding the trial of her former surgeon and heart maker. The mechanical Augmentation that has saved her life has caused a deep rift within the people of her land, some feeling that it is an abomination, while others hope to use the technology for the betterment of their people, though there is fear that if it were to fall in the wrong hands the technology could cause great harm.

Enter Marcus, the dark-haired, 19 year old head of the largest private military force in the land, who has been apprised of the events that surround Penny. Decisive and oh so reliable, he turns up at every corner, quietly looking out for Penny, quietly making his attraction to her known, but always ever so quietly. Marcus turns out to be something of a studied gentleman. He is powerfully muscled, yet very restrained and non-threatening. Even when shooting cannons and driving airships, he manages to only gently raise Penny’s temperature, but only by half a degree or so, as she is focused on the action of the plot.

There is romance in Ticker, most definitely, but it is the romance of a kinder, gentler time. There is no nudity, no intimate encounters, no heaving boobies or stiff willy’s that might offend the delicate nature of a blossoming young lady. Instead, it is the slow moving, incremental seduction of the Victorian variety. This type of romance is sweet and appropriate to the story, especially considering the (under)age of the heroine. The interactions between the protagonists are within such strict adherence to actual Victorian social mores and customs, that I am loathe to even use the word seduction to describe the lovely connecting Penny and Marcus achieve over a series of encounters and events.

To be clear, the romance offered is simple and genuine, and if you were looking for something hot and steamy (pun yet again intended), such as panting dalliances in the back of the Flying Fortress or nudity in the seats of the Theatre of Moving Pictures, then you will be disappointed. There is no explicit erotica in this work. But do know that the lack of sweat soaked sex does not actually remove or take away from the enjoyment of this book as a self-contained unit. The narrative is interesting enough that you won’t miss the sex.

Instead, Ms. Mantchev holds the reader’s attention with a tight knit group of personalities that make one want to be included as a chum. She paints a multi-layered portrait of each character through multiple scenes and dialogue. The action is tight and logical. The story of Marcus, whose character could have been fleshed out a bit more, vis a vis his growing concern and emotion toward Penny, could very well spawn another book on it’s own, as could the love and devotion between Penny’s brother and his girlfriend.

The enticing descriptions of the world Penny inhabits will definitely hold the interest of readers. There are wonderfully puzzling mechanical horses, clicking gear-driven butterflies, nefarious insects, a steampunk taser called a Pixii, assorted steampunk weapons and enough elaborate confectionary creations to have you running for the nearest bakery (order me an extra ‘figure-eight’!). You will end up rooting for the gang and wanting to get a “BAKE CAKE” tattoo on your knuckles (the coolest tattoo ever!) and by the end of the book you will come away with a definite desire to wear a corset and bustle to your next dinner party.

In fact, this book is oddly affecting and satisfactory in a way that many contemporary romance novels have forgotten how to be: it is seductive in its innocence. Where a blush is the height of sexual heat in a scene and a glance or a sigh can express growing desire, this type of writing reminds us that the action of a man kissing the gloved hand of a woman, when written well, can be very erotic indeed. It harkens to the sweetness and yearning of proper courtships. There is a lovely theme of flowers expressing meaning (floriography) that Marcus decides to utilize to the delight of Penny. Again, lovely and sweet are words that come to mind when talking about this novel. In fact, you may find yourself wishing for just one extra chapter, as the book ending promise of a date between Marcus and Penny only leads to further romantic sighing and wondering.

This novel deserves every bit of it’s 4.5 out of 5 star rating. A tiny bit more romance would have pushed it to a five out of five stars - a few more breathless looks, the delicate brushing of hands or a chaste kiss would not have been amis in such a well told tale, and would have left the reader completely warm and sated.