Forever With Me by Kristen Proby 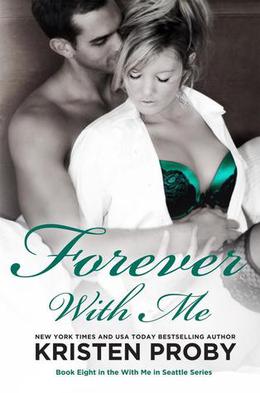 Forever With Me is the eighth book of the ‘With Me in Seattle’ series written by Kristen Proby. Ms. Proby has admittedly delighted in telling the tales of romance for each member of the Montgomery family as well as some of their extended relations. This particular novel tackles the story of Dominic Salvatore, the once-engaged, Italian, vineyard-owning millionaire. His love interest is the not-capable-of-being-in-love Alecia, event planner to the rich and famous. Their story is told from their alternating viewpoints, giving readers some very good insight into the age-old dance of male and female attraction as they hide and seek to find and realize their love for the other and eventually win their sexual soulmate.

Sponsored links
Dominic is the epitome of dark Italian good looks. His olive skin extends all the way past his waistband and his accented English is enough to make you think you were in a Tuscan sun-kissed garden being hand-fed olives and wine. Sigh..he really is an excellently described Man, with a capital ‘M’! Alecia is more of a mystery however. Her longish blond hair is usually secured tightly into a twist along with the rest of her emotions and desires. We are made privy to the fact that she does not believe in love very early in the book. Alecia’s story slowly unravels as the action plays out and we get to revisit some of her past relationships to better understand her reluctance at accepting Dominic’s attentions - despite her nighttime dreams yearning for his touch.

Dominic is introduced to us as a deeply passionate, caring man. A man who has loved and admired Alecia from afar for over a year. We discover he has asked her out numerous times, only to be politely turned down as Alecia does not want to date people in her work world. Dominic’s devotion is such that his entire family is aware of his interest in Alecia and two or three well-meaning siblings aim to help the action along by hinting, influencing and outright forcing the two to explore their feelings for each other. Dominic goes to great lengths to be sensitive to her needs, calm her fears and even to rub her feet and give her a bath. Sigh...what a dreamboat!

Which is why when he ‘fucks’ Alecia roughly from behind in an alley outside of a club, in a short, aberrative, borderline rape-y scene, it’s so out of character for the man who likes to kiss gently with his forehead touching Alecia’s, that I had to pause and re-read to make sure I understood what had just transpired.

The action that precedes this ‘interlude’ is a drunken Alecia telling another man in the large group of also drunken family and friends out celebrating, that she thinks one of the men present is ‘hot’. Dominic’s immediate response is to take her out back to an alley and enter her forcefully from behind with no foreplay, while telling her she belongs to him and no one else. This primitive act of ownership is rather shocking and highly out of character for the Dominic we have been introduced to. To be clear, Dominic’s behaviour isn’t generated by his deep need and want of Alecia, in fact, his actions are admittedly spawned from jealousy - and that is not a good thing - whether in fantasy or reality.

Now, some women find the idea of a man wanting them so much that they’d like to roughly be possessed by them, feel physically ‘owned’ by them arousing, and I can understand that impulse. However, any sex that occurs as a consequence or as a punishment is just plain wrong, and as this was a physical response to a throwaway comment made by Alecia, it falls into that category in my view. It seems Ms. Proby may have realized this as well, as she adds a somewhat belated line about Alecia ‘loving the feeling of Dominic’s cock sliding into her’, but it doesn’t temper this aberration. Thankfully, this misstep was brief, though it should have never found a place in the story.

Overall, this is a classic romance novel, with otherwise great, intense and arousing sexual encounters, excellent build up of sexual tension and two well described, highly sexual protagonists. The thoughts, desires and fears of both characters are dealt with sensitively and with maturity. If you can ignore the liberal and unnecessary use of F-bombs thrown into the general dialogue (and can blot the alley scene from your mind), you will enjoy this book as the slice of escapism it’s meant to be. In true romance novel style, Dominic and Alecia are both financially well-to-do, which makes their homes and travel options all the more plush and perfect for the luxe we seek. Last minute month-long trips to Italy, $100,000 dollar weddings and a broken pair of $700 Jimmy Choo shoes are just a part of daily life events in this world, and we can’t help but imagine ‘wouldn’t that be nice!’?

Another benefit, or drawback, depending on your familiarity with other books of the ‘With Me in Seattle’ series, is the time spent revisiting the many characters and couples from Ms. Proby’s previous books in the series. A rare treat for some readers as most couple’s stories usually end on the last page of their particular novel or perhaps with just a brief epilogue. In the pages of Forever With Me, Ms. Proby gives us a peek into where all of her couples have ended up as they attend weddings and parties, some with children in tow. Confusingly, there are times when the background stories of these people are filled in just enough to make these narrative tangents interesting and enjoyable to the uninitiated, but unfortunately there a few too many listings of unfamiliar characters present at various functions. Perhaps a culminating novel, rather than the nostalgic last chapter told from the viewpoint of the Montgomery patriarch, would have helped put the Montgomery clan’s epilogue to rest in a more considered, less rushed way.

Ultimately, one of the things I truly loved about this book from the first page until the last page was the setting, a sort of surprise as Seattle is depicted in a richly beautiful way and not as the perpetually rainy home of grunge and discontent. Ms. Proby treats us to gorgeously lush vineyards in late summer, picnics by the water and late night glasses of wine in front of outdoor fireplaces. She has made Seattle accessible to us as readers and has embedded a new desirable destination for all of the travellers out there. Ms. Proby has accomplished her overall goal in this book: to give us a few hours of pleasurable escape through romance and some sizzling sex against a beautiful natural backdrop, all in a world of luxury few of us will live in, but certainly love to have a vicarious peek into.