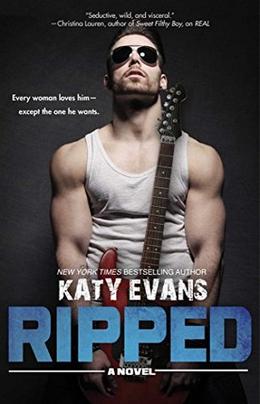 We’ve all had an ex that overstayed their welcome. The one that keeps showing up at the bars you like; the one that you can’t stop thinking about, despite knowing that they were a bad idea to begin with; the one that was an unfairly great lay and an unfairly awful guy. But what if your ex was famous? Someone so famous, you couldn’t avoid them no matter how hard you tried? This is the problem faced by Pandora, our heroine in Katy Evans’ Ripped.

Sponsored links
Mackenna Jones, the front man and musical force behind the wildly popular band Crack Bikini, broke Pandora’s heart, and she’s never really recovered. Even worse, the band’s breakout single, Pandora’s Kiss, is essentially a letter of loathing set to a tune and written, very pointedly, to her. Mackenna and Pandora each blame the other for the fallout from their failed romance, and they clearly haven’t moved on, despite the intervening years. Over the course of the novel, we watch them try to piece themselves, and each other, back together.

Pandora has never forgiven Mackenna for abandoning her, without explanation, when they were teenagers. Burdened with an emotionally distant mother and struggling with the loss of her father, Pandora has completely shut down. She gave up on herself and the world around her as a teenager and never opened up again; she forgives no one, accepts nothing, and dislikes just about everything. She’s a cranky, reactive, unthinking young woman who wears a lot of black, insults anyone who looks at her cross-eyed and generally stomps through life with a bad attitude. In other words: I adore her.

Mackenna Jones, on the other hand, is a cocksure, arrogant, hard-partying rockstar. When Crack Bikini comes to town, Pandora sneaks into one of his concerts with a half-baked scheme for “revenge” after all these years (she throws produce, like an irate shakespearean audience member, and for the life of me, I don’t know why I find it so amusing). She’s caught, of course, and dragged backstage by security; Mackenna shows up, a confrontation ensues, and the sparks begin to fly immediately. As a result of Pandora’s very public temper tantrum, the band’s manager decides that their story makes for great publicity, and despite vocal disagreements on both side, Pandora agrees to participate in Crack Bikini’s upcoming tour. Which is right about when you and I, dear reader, start waiting impatiently for them to smash their sexy parts together.

I have only two complaints about Ripped, and I’ll get them out of the way now--first and foremost, I absolutely cannot believe that there was not a single pun about Pandora’s “box.” I think a real opportunity was wasted here, and I expect this to be rectified in any and all sequels. Take the low-hanging fruit, Evans! It was RIGHT THERE.

Second, there was a subplot involving a secret pregnancy that seemed out-of-sync with the rest of the book. It felt like it was included somewhat belatedly, and in general, I’m not a fan of the still-pervasive trope that any time high schoolers have sex, babies must occur. It’s disingenuous and reminds me of the Hays Code in classic cinema (e.g., criminals always get caught, the only people who drink are raging alcoholics, only married couples can have sex). It really detracts from what is, otherwise, a very fun, very sexy book.

Oh, is this one sexy book. Forgive me if I’m waxing a little too poetic, but Evans does one hell of a job with the smut. She starts in almost immediately—Pandora has a bad habit of vividly fantasising about Mackenna any time he’s in the room—and doesn’t let up. Our two leads crackle, spit and burn with lust for one another, and thankfully, we aren’t kept waiting long. The sex itself is well written and an absolute turn-on. I had the flu while I read half of this novel, and it still put some bounce in my britches. While this was, personally, rather frustrating (I was still half-dead on the couch, and that is a bad place to be when your only thought is “sex, please, yes, now,”) I can’t really think of better praise than that.

Watching Mackenna and Pandora attempt to reconcile their past with their future is both enjoyable and well written. (Okay, third complaint: who names their daughter Pandora? That does not set a child up for success. Parents of children named Pandora, feel free to send me explanations.) Additionally, Evans has populated their little world with engaging, likeable side characters. The “Viking twins,” Mackenna’s bandmates, are sweet and funny, and Pandora’s two best friends (who each have their own novels) are sunny, cheerful foils to her thundercloud personality. Pandora’s relationship with her little cousin, Magnolia, is absolutely precious, and a nice redeeming feature early in the book, when Pandora’s personality seems to be defined entirely as “petulant young woman who can’t move on already.”

Mostly, though, the novel is carried on the strength of Mackenna, Pandora, and their unbridled lust for one another. They’re a little broken, very stubborn, and in need of a some forgiveness all around, but that makes them likeable and engaging, even when they’re not dancing the naked tango. What more can you ask for?

Ripped may be more smut than romance, but Evans does both exceedingly well. Despite a couple of small hiccups, it’s worth reading for the quality of Evans’ writing, the well-drawn, larger-than-life characters, and an impressive supply of wank material.