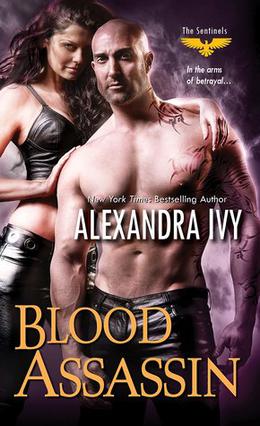 Alexandra Ivy takes the time to lay out the inner workings and parameters of her supernatural world before diving into the nuts and bolts of her narrative. The magic, powers and types of ‘beings’ (High Bloods, Guardian and Hunter Sentinels) are explained thoroughly and plausibly before she launches into the dynamics of her futuristic world.

Sponsored links
The human ‘Norms’ (normals or beings with no special powers) have slowly become accepting of the High Bloods, Psychics, Witches and Sentinels who have been born amongst them and make up a small portion of the population. Relations have progressed to the point that children with identified burgeoning powers are sent to special training facilities in order to learn about and control their powers for the greater good of the combined population. These facilities are both home and headquarters to the adult ‘specials’, if you will.

It is in the main headquarters in America that we meet our central characters. A sweaty showdown between a shirtless Fane and an upset Serra draws the reader into the highly physical world of this story. Serra confronts Fane demanding to know if the rumor of him leaving the country is true and sets up the crackling sexual and emotional tension that resonates between the two throughout the book.

Each of the protagonists is a physical specimen of perfection. The muscles, stamina and prowess Fane displays is an earmark of the Guardians as legendary lovers, able to please a woman for hours before seeking their own release. Serra, in turn, is a beautiful, dark haired, green eyed beauty with curves that last for days and a penchant for wearing leather, halter tops and giving men whiplash.

The plot instantly thickens as we find out that Serra has loved Fane since her teen years, and still loves him despite his work and special ‘bond’ as a Guardian with another woman he has protected. Fane, being hundreds of years older than Serra (and supposedly the wiser for it), has hidden his own deep love for her in order to protect her from the heartache his work would bring. Fane feels he would never be able to give her the love she deserves, and worries that it may actually hurt her, so he keeps his distance: a classic romance novel trope - forbidden love.

Blood Assassin starts off at a nice pace. A small band of humans have formed ‘The Brotherhood’ dedicated to eradicating the paranormals, and Serra is quickly swept up into a spell-induced abduction, with Fane charging to the rescue. At this point, we start to realise that Blood Assassin is an action novel as much as it is a romance novel, and as such, one would expect the romance of Fane and Serra to be experienced in snatched and stolen moments along their adventure. Unfortunately, this is where the pace falters. Without giving too much away, a time-sensitive, life-threatening situation is not enough to distract our hero and heroine from taking multiple, hours-long, sex filled interludes to explore and indulge their passion for one another.

Now, while I am all for some juicy shower sex, excellent hotel sex and just plain old banging sex (all of which Ms. Ivy is exceptionally talented at writing, in excruciatingly delicious detail), all of these weirdly timed breaks upset the pace of the story. The intensity and active nature of the plot seems at odds with the languorous interludes we get to enjoy between Fane and Serra. I just wish that Ms. Ivy had evened things out a little more, so that the action and the sex were better balanced.

The only other criticism I have of this novel is the strangely timed decision of Serra to spurn Fane’s advances once he starts to truly declare himself. It seems strange that a woman who has loved a man for years, would suddenly, at his breathtakingly expressive attempts to rescue and make love to her, decide not to let her heart be risked. Didn’t we begin the story with Serra demanding to know if Fane was going to abandon her? Serra’s actions on that front don’t really ring true, as any woman having been captivated by a man they had longed for so intensely and so completely and for so long would most likely have said “about bloody time” and jumped into the shower with him butt-naked and ready for loving!!

Overall, the story and creativeness of the world and characters that Ms. Ivy creates are very satisfying. There is enough intrigue and detail to give all readers something to sink their teeth into. There is also a delightful side romance that becomes quite interesting and enticing between the head of the Sentinels and the head of the High Bloods. Perhaps that will be a new novel-romance for Ms. Ivy to develop. I would certainly like to read more about the Mave - to find out who she is/was and who she could fall in love with.

I suppose that these are the reasons why paranormal romances seem to be taking off - they provide the traditional escapism of a romance novel, yet take us to a new world where the impossible can become real and where good and evil still battle it out. And one thing we can all agree about is that everyone loves a rollicking good adventure with some sizzling chemistry, sex and where we can hope the good guys will triumph over evil.