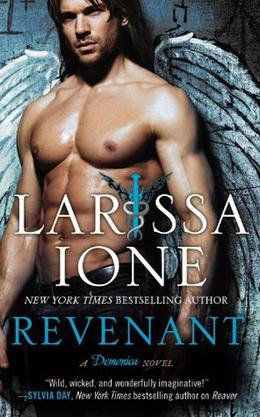 The latest in a series of paranormal romances by Larissa Ione, Revenant is a heady mix of biblical folklore, smut, and a centuries-old plot to save both Heaven and Hell from the machinations of a corrupt angel and Satan, the lord of the underworld himself. While it’s well-written and engaging, Revenant can be downright confusing at times, and the central love story lags behind Ione’s overarching, bible-themed political thriller.

Sponsored links
Revenant introduces us quickly, and without much explanation, to a whole cast of characters both heavenly and hellish. Ione has clearly devoted herself to thorough world-building, and it shows. Where most romance novels have a fairly linear plot, focusing predominantly on the two leads and their insatiable need to smash their happy parts together, Revenant ditches that focus to build a thriller based around the political intrigues of Heaven and Hell. Ione’s mythology is thorough, and the plot twists are interesting enough; however, the intrigues stumble at points, and the smut is too intermittent to be a real focus for the novel.

Revenant, our titular character, is a broody, blindingly attractive Fallen Angel. He’s just come into a new set of powers, and a new set of memories, after having his forcibly removed by heaven for several hundred years. He’s struggling to come to terms with both; additionally, having spent his childhood, literally, in hell, he has grown into a short-tempered, dark man with a predilection for violence. He takes what he likes, kills people for crossing him, and spends his time doing the bidding of hell’s big bossman, Satan himself.

Complicating things is Revenant’s equally powerful twin, Reaver, who--in painful contrast--was raised in Heaven as a true Angel. Revenant is caught between the extremes of the two supernatural kingdoms, and has a decision to make; can his soul be salvaged by his brother, or will he embrace his upbringing and take his place among the hierarchy of hell?

Revenant is a true bad boy hero, and of course, he has one soft spot. Our heroine, Blaspheme, is a beautiful occupant of Hell, and a bit of a contradiction. A demon with a conscience, a native of the underworld with a genuine streak of empathy and an abhorrence for cruelty. As a “False Angel,” she’s supposed to be a manipulative succubus, concerned chiefly with her own pleasure at the cost of anyone who may wander into her path. Instead, she’s a dedicated doctor who cares deeply for her patients and balks at unnecessary pain or conflict. She loves her job, and she’s extremely good at it, despite the complications of her often messy life. So when Satan requests that Revenant find a doctor to see to the heavily pregnant mother-to-be of the reincarnation of Lucifer, Blaspheme is the first person he thinks of.

I know. It makes more sense in context. Really. Also, yes, Hell has a hospital staffed by demon doctors. Of course.

Revenant pressures Blaspheme into helping him tend to the nastiest mother-to-be in Hell, and attempts to coax her into helping him assassinate the unborn Lucifer. Meanwhile, Blaspheme is harboring a dangerous secret, and Revenant may be the only person who can keep her safe. Sparks fly, things, of course, become complicated. Sex is had, attraction becomes irresistible, and you honestly know the rest.

I enjoy paranormal romance because I think it gives the genre that much more mileage: you can only read but so many novels about modern, spunky young women, separated from their modern adonis by mild miscommunication, who then patch it all up with complicated but ultimately satisfying sex. At least when your spunky young woman is a were-something or some sort of mythological figure you’ve got more subject matter to play with. The series that Revenant belongs to, the Demonica/Lords of Deliverance series, focuses on the complicated and crowded worlds of heaven and hell--Demons, Angels, Fallen Angels, False Angels, the Four Horsemen of the Apocalypse, and many, many more. They can be a little difficult to keep up with, especially as the plot develops. Our story is a busy and complicated one, and Ione occasionally seems to get so caught up in showing off the (admittedly clever) mythology she’s built that she forgets that the reader’s context for it all may be less thorough than hers.

The wank material here was pretty good, but as I said, there wasn’t a huge amount of it. The sex, and honestly, even the romance, really played second fiddle to the overarching drama that Ione was after. While the plot is compelling enough, it strays sometimes into the overcomplicated, and plot points tend to be resolved without real explanation. (Yes, of course you’ve just now discovered that you can solve this enormous problem with a wave of your hand! How convenient!)

Revenant was, certainly, absorbing while I read it--but good luck trying to explain it without sounding like a crazy person. I just resorted to telling everyone I was reading about angel boners, which worked, but there’s a lot going on in this book. Ione manages to weave most of the plot back together in the end, but the twists and turns it makes on the way are a little more than convoluted, and the resolutions are a little too pat to be satisfactory.