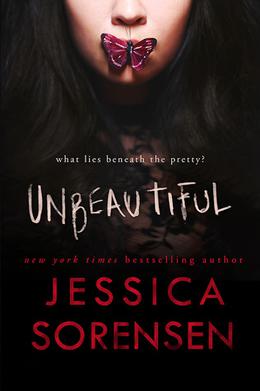 This short-ish book by Jessica Sorensen starts out with all the elements of a solid, young adult romance novel. It has dark themes, a bad boy lead who has mysteriously done a stretch in juvenile detention and a beautiful, sheltered, cheerleading prom queen. Add in some very dark and disturbing glimpses into a very abnormal town, and BAM!, Unbeautiful should be a hit.

Sponsored links
Except it’s not.

There is far too much - characters, plot lines, backstory and action - that only gets alluded to or partially described and yet is somehow never really tied together to get this book off the ground in an effective way. Add to all of that the unlikelihood of these two characters attending the same creative writing class, let alone college, not to mention one character being mute and the other knowing sign language, and you can start to see why Unbeautiful is a fantastical mess of half- ideas that never get their due treatment.

The book’s cover illustration references the Silence of the Lambs movie poster, a story where some really twisted things happen, and Unbeautiful is not too far off that mark there. Mystery surrounds Ralingford, Wyoming, a town where unspecified badness (rapes and other atrocities are alluded to) happen after the town curfew sets in. We find out that Emery, our female lead, hears screaming from her basement every night and that her brother talks to her in her mind, but is nowhere to be found in reality. We also meet Ryler, our tattooed hottie with a lip ring, and learn that he also comes from some seriously compromised origins - his vocal cords were damaged in a foster family violent incident for which he was incarcerated, and he now can now only communicate in sign language or through writing.

That fate has somehow implausibly allowed Emery to leave her Stepford-on-crack home environment to live on her own and go to college an hour away from her super controlling parents (we’re talking nightly restraints and forced medication here, people), is laughably unbelievable. Unless this is a plot device that will be explained in a future sequel, it makes absolutely no sense and guts the novel’s credibility, especially since Emery did not run away and her parents know where she lives (her dad leaves a note on her doorframe with a knife pinning it to the door jamb). Add to that Ryler fleeing his controlling birth father by being recruited to infiltrate the mob of goons his father forced him to gamble with and rip off in Vegas and the believability factor sinks even further.

The limited action only starts after much hinting at the violence and suffering occurring in Ralingford. Emery and Ryler are given alternating chapters in which the story is told (or hinted at) from their own point of view. By the time Emery and Ryler eventually meet at their mutual apartment complex, after much indirect backstory told through personal writing, conversations and stream of consciousness, the book is already about halfway over. The attraction of Emery and Ryler takes a back seat to the nefarious atmosphere of this book and the incidences of weirdness that separately keep following the two.

It’s easy to guess when Emery and Ryler would hook up, but the level of sexual interaction they experience together (kissing and dry humping that produces Emery’s first-ever orgasm) doesn’t sync with the level of depravity generously hinted at (torture) and rarely mentioned in detail save for the graphic scene where a man is shot point blank in the head, spattering blood on Ryler’s face. Dry humping and gangland style executions? An odd coupling indeed. It also doesn’t take a rocket scientist to figure out that Emery and Ryler’s world’s will overlap sooner or later - two people with that many secrets and trouble in a small Wyoming town obviously have some connection...but the expected BANG! never happens...and the one plot twist that does occur near the end of the book merely whimpers like a wet firework.

The plot also alludes to quite a few secondary mysteries (the nightly basement screaming, the debauchery after curfew) and characters (Emery’s brother and Aura who was Ryler’s first love and the elusive boss of the mafia/gang) whose stories are introduced, yet never told. Each of these items, if dealt with directly, could have enhanced the story and added some real meat to the plot. Instead, these half-told snippets ends up being a major frustration to the reader as the backstories, or roles in the main character’s backstory are juicy enough that we need to know more about them!

Too much mystery can turn a reader off.

I actually double checked the table of contents to make sure I hadn’t somehow erred in missing a good chunk of my e-book version of the novel, as so much of the story remained unresolved at the end. I also double checked to make sure that Unbeautiful wasn’t the second part of a three-part set or that I had somehow just mistaken it for a stand alone novel, but nowhere on the cover of this book, nor in the introductory blurb that is used to advertise it, does it tell the reader that this is meant to be an installment - an incomplete, tease, if you will, of the entire saga. Unbeautiful is marketed as a complete novel, and only after the ‘About the Author’ section did I find information that announced a second novel in the series is to be released in February of 2015. Further digging led me to discover that this author has a penchant for ‘series’ of her novels, which is all well and good, but even as such, Unbeautiful still has a lot of explaining left to do.

The bottom line is that after finishing this story you will be left with far more questions then you will have had answered. You will also be left with the feeling of “What the hell? Where is the rest of this book?”. As well, be aware that Unbeautiful is not a typical romance novel, nor is it a typical young adult romance novel, even though the sex is written at that level. Writing a complex plot with rich characters and interesting storylines is a difficult business at best, and perhaps Ms. Sorensen was deliberate in wanting you to question whether Emery is really psychotic, or whether Ryler will ever get a chance at a normal life, so that you will want to read the next installment in her series. However, this is not part four of a serial in a magazine - this is a novel that should have had a definite beginning, a middle and an end.

Ultimately, Unbeautiful by Jessica Sorensen should really be re-titled Unsatisfied.