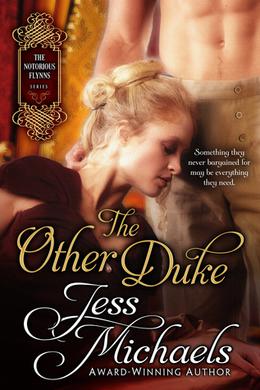 The Other Duke is the first in Jess Michael’s new series, The Notorious Flynns. Based on the subject material--a reluctant duke, a marriage contract, high society London in the Regency era--I was expecting a bodice-ripper, with plenty of reluctant damsels and manly men. Instead, I was pleasantly surprised by a more modern take on the genre, with a heroine who, though distressed, is certainly capable of taking care of herself and a hero who is friendly, sensitive and (mostly) lacking in blundering, defensive possessiveness.

Sponsored links
The novel opens with my new lady-crush, Seraphine. She's in a bit of a pickle, to put it lightly. Her father, grasping for position, has essentially auctioned her off to a nasty, nasty man named Cyril whose only redeeming feature is that he’s a Duke. Seraphine couldn't give less of a hoot for his ancestral title, but it's not like anyone's asking for her thoughts on the matter, what with her being a woman and all. I mean, honestly, lady. If you wanted to have opinions, you should have been born a dude, am I right?

Thankfully--and conveniently--Cyril has the good sense to die off about three pages in. Less thankfully, Seraphine gets to rejoice for about ten seconds before dear old daddy announces that she is most certainly not off the hook. Instead, she's being handed off to the new Duke, Cyril’s cousin, Raphael Flynn.

Raphael is a notorious party animal; he and his brother love nothing more than setting polite society on end, and they revel in the resulting gossip. Life for the Flynn boys is about as good as it can get--so you can imagine that Raphael is about as excited as any young, rich, shiftless guy would be when told he's inherited a stuffy title and a wife all in one go. He and Seraphine both try to back out, but they’re both emphatically told that they cannot. They're stuck with one another, for better or worse, and the marriage goes forward as planned.

A quick aside: due to the shared last name, I spent the whole novel picturing Raphael as a young Erroll Flynn. I’ve since decided that, in the fantasyland I call my brain, Erroll is somehow descended from a handsome romance novel family. So, there’s that.

This being a romance novel, Raphael and Seraphine immediately tumble into bed, and decide that, you know, maybe they don't absolutely hate one another. As they begin to fall for one another, a secret emerges, one that has troubling consequences for them both. On top of that, Seraphine wants nothing more than independence from all male control. As Raphael realizes he’s falling for her, the question becomes: can he convince his wife to fall in love with him?

Now, I have a couple nits to pick with The Other Duke. (Although, not nearly as many nits as these characters would realistically have had, in an era when nobody bathed all that often.)

First and foremost, and risking mild spoilers: I am really, really not a fan of heroines with rape as a defining part of their backstory. It's a cheap trick, as writing goes: women can be troubled and not a huge fan of sex or intimacy without having been violated. Especially in a period piece, there are plenty of reasons for women to just be utterly disinterested in men--you know, that whole "being treated like exceptionally pretty and bangable livestock" thing. If you're going to drop the R-word into your prose, you'd better have a damn good reason to do so. Michaels does handle that whole part of the plot fairly well, to be fair; but personally, I think the novel could just as easily have stood without it.

Seraphine, I think, is where The Other Duke really shines. In a genre dominated by stories of women who start strong and fierce before slowly melting into piles of lady-goo, this book offers a refreshing narrative arc of a strong, intelligent woman really coming into her own and learning to stand up for herself, supported--but not led by the nose--by a handsome and likeable male protagonist. Seraphine has been taught all her life that she’s an ornament. Over the course of the book, we watch hear learn to assert herself in all kinds of ways, with Raphael’s help. Raphael is a great character; thoughtful, well-written and respectful in a way that can be hard to find in the genre, and I appreciate that.

As for the smut--I know that’s what you’re all waiting for, don’t lie--it’s wonderful. Just fantastic, peppered in liberally and really fun in a way that a lot of novels don’t manage. Rafe “introduces” Seraphina to sexual pleasure in a way that’s endearing rather than condescending, and once she gets into it, things get dirty in a hurry. Woof.

I do have one itty-bitty critique for our author, though, where the sex is concerned. I realize that it is easy to run out of good ways to describe sex and sexual arousal, especially where women’s bodies are concerned. Men are easy enough--just whip out your thesaurus and flip to the page for “hard.” Women, though, are more complicated. There aren’t a lot of flattering ways to convey, well, wetness, especially without using the dreaded word “moist.” Ick. HOWEVER. I beg of you, on bended knee, unless you are a medical doctor and discussing some kind of ungodly affliction, never, ever describe a woman’s hoo-ha as “weeping.” Just. Don’t. Do it. That is a mental image it takes several glasses of wine to recover from.

There’s a subplot that crests just at the end that added a nice dash of adventure, and gives Seraphine a good excuse to stand up for herself and more or less save the day! It was a nice addition to an otherwise charming plot, but it felt a little bit rushed at the conclusion. The side characters are all fleshed out quite nicely, and Rafe’s family are incredibly endearing, which is promising, since I believe they’re all due for their own novels this year. Annabelle Flynn, in particular, I am looking forward to reading about more.

All in all, I look forward to reading the rest of the “Notorious Flynns” series as they come out. I heartily recommend this book!