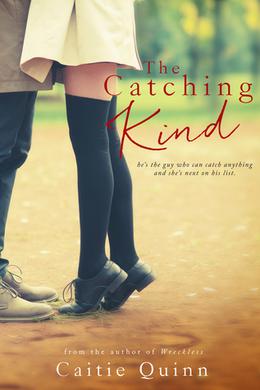 The Catching Kind starts out the way a thousand other romance novels do: a disgruntled woman late for something gets distracted by a gorgeous man who, upon first introduction, seems a complete Neandertal. Throw in an ‘unholy bargain’ that puts them in close proximity for a few weeks and Ta Da! there is instant chemistry followed by luscious interactions and a happy ending. However, The Catching Kind also succeeds by leaving you thinking about more than just the basics of boy-meets-girl that we all enjoy in our escapist novels. The Catching Kind makes you consider and possibly re-consider your ideas about beauty, attraction and self-worth as well as who possesses the right to determine what beauty is and why one person’s plain-jane is another’s goddess.

Sponsored links
Connor Ryan and Hailey Tate meet in an elevator. She is decidedly downmarket in her comfy yoga pants while he is the athletic god trying to pick up a model right in front of her (and succeeds in getting a phone number, in case you were interested). We learn that Hailey is a bookish, somewhat nerdy author of young-adult paranormal romance books who is on her way to meet her editor. Connor Ryan is a professional baseball player who is in a whole lot of trouble in the press for philandering with any and all women - including his teammates’ girlfriends.

Conner is on his way to meet with his PR person who works in the same building as Hailey’s editor. Fast forward and shock and horror! We discover that Hailey’s editor has ‘lost’ Hailey in a poker game to Connor’s PR man. The ‘unholy bargain’ states that for the next month Hailey will pretend to be Conner’s next tabloid girlfriend, who, with her quiet, non-scandalous ways, will restore his fan’s faith and his credibility in the press, while she gets to ride his celebrity to up her own press credentials.

From the start, this novel goes back and forth between our little girl dreams of snagging a star athlete, getting a ‘princess’ makeover, and being recognized for the vixen hiding within, and our grown up need to be viewed as an intelligent, capable woman who does not NEED a man, but certainly would LIKE a good looking, hard-bodied babe. Hailey embodies these qualities quite well. She appears as some sort of a sleeper: a non-virgin happy to be dating regularly, but has never really had her proverbial socks knocked off by anyone before...that is, until she is coupled with Connor. Conner is portrayed as the sexual bad boy: a man so far out of her league that we are reminded again and again (and mostly by Hailey herself, oddly enough) that she is not pretty enough, sexy enough, tall enough, gorgeous enough or famous enough for him to even consider being with her.

What I liked about this novel, though it may have been repetitive at times, is how Ms. Quinn comes at this issue of worth from all sides. Once Ms. Quinn deals with the obvious physical neglect Hailey exhibits (hair unkempt, drab wardrobe) thorough her professionally styled make-over, she begins to deal with the underlying perceptions of what beauty is and what value is placed on celebrity and attractiveness. There are a couple of terrific scenes where Connor’s fans can’t accept that she is his girlfriend - they are incredulous (and occasionally downright speechless) that he would not be out with either a model or a recognizable celebrity. So, Ms. Quinn deliciously contrasts this with Hailey’s fans’ disappointment that she is aligning herself with a philandering jock who must be beneath her intelligence level. Add in some girlfriend kick-in-the-butt heart-to-heart talks and The Catching Kind starts to build up some enjoyable credibility.

Though it seems to be the fashion of late to tell a love story from alternating his-and-hers viewpoints, Ms. Quinn makes the right choice in telling the events from Hailey’s point of view alone. Maybe because I can’t figure men out all too well either, it somehow makes the journey of Hailey’s experience all that more enlightening. Call me crazy, but I enjoy the experience of someone other than myself floundering in that same area with men, and that makes the suspense and emotional build up just that much more intense while the events unfold. I even found myself cheering along with Hailey’s friends as she claims her self-worth and takes a chance on herself and Conner.

As for the sex...well, the sex never really happens...and wait - that is OKAY! While there definitely is a lot of drooling and yearning, Conner and Hailey actually begin to build a friendship before becoming physical, and ....OH MY GOD!!! ...I think I just read a clean romance novel without realizing I was reading a clean romance novel!!

Seriously, the interactions and conversations between Hailey and Conner are what make this book pleasurable to read. Watching their growing bond and seeing an actual relationship develop is the real gift of this book. Seeing Hailey discover her inner confidence and assert her self-worth where other women might fold and collapse like a house of cards, is testament to Ms. Quinn’s goal of shoring up woman-hood’s self-esteem through her novel. It is easy to see what sort of influence Ms. Quinn is hoping to impart on her readership through Hailey’s adventures.

Even though the writing is a little choppy from a temporal point of view (a month passes without us being aware of it) and Connor starts off as being almost unredeemingly assh***ish, the focus is instead on the nobler intentions and questions Ms. Quinn raises and attempts to deal with. These memories of the book are what will stick with you far longer than any weaknesses.

The Catching Kind is definitely a book worth checking out.