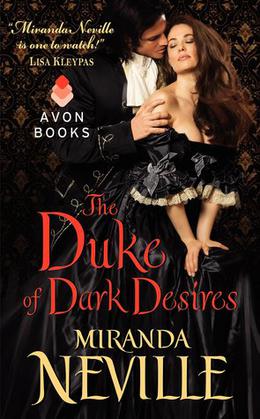 The fourth book in Miranda Neville’s the Wild Quartet, The Duke of Dark Desires is not only a stand-alone plot, but also giving some resolution to plot threads that needed a last tweak from the entire quartet. The plot runs through the usual ups and downs of our soon to be lovers meeting and deciding there is no way they can be lovers, before tumbling into bed, or in this case a divan in the library, with the reason they shouldn’t a looming part of the story, until finally an irrevocable difference rips them apart. Love finds a way and our lovers hold each other before the plot builds to the dramatic climax.

Sponsored links
Set against the backdrop of early 19th century England, Neville does an excellent job of placing the two main characters equally in the story. Julian Fortescue is still adjusting to life as the Duke of Denford and the riches that had brought him, and Jeanne de Falleron is coldly seeking revenge for the death of her family at the guillotine during the French revolution. Having escaped the executioner by disguising herself as her former governess Jane Grey, she uses this identity to seek employment as governess to the Dukes three younger sisters.

The other characters in the story are less developed to say the least, and as a reader you’re left with a vague feeling of stories that must have been told in the previous three books, and in some ways this backstory and his friends leads to Julian himself being a little confusing as a character. Whilst the backstory that is needed is told, the relationships between himself and characters that have appeared before is barely explained, leaving some plot twists feeling a little convenient.

He is the blacked clothed man who has no need of love, and a dark secret that is torturing him, his hard exterior hiding a gentler side. She is the innocent governess hiding a darker side that intends to kill the man who betrayed her family. I doubt anyone needs a plot summary to say who that man will be, and what his secret is. A sudden change in his circumstances from lonely art dealer, to a rich Duke with three sisters to care for and a woman he loves through the book gives Neville plenty of time to bring out his more caring side and develop him into a caring man. At the same time Jane is being taken from a woman with only revenge in her heart, back to her own well-bred past and stripping away the layers of hurt and betrayal.

If you like a story that starts with a bang, then you might want to look elsewhere, our lovers don’t actually give in to any darker desires until almost exactly the halfway point. After this point the story itself starts to take over leaving rather less chance for smut once they are on the way to the final destination. However like any good characters in this genre they do manage to sneak away enough to keep things at a high temperature.

The lack of other well rounded characters means the story can be rather slow, but you do get to know the two central characters better. Julian travels away, but other than waiting at home with Jane the reader is left out of this part of the story, leaving Jane daydreaming with the children or trying to reconcile her awakening desires with her anger and revenge.

The end rushes in, again clearly not just the end of the book, but of the whole series, but it does seem to skip over the important points, two road blocks are thrown firmly in the way of love, but they are barely enough to keep them apart more than a few hours. Rather after the tension developed in the earlier chapters, the characters seem to almost give in, and just accept things are going to be.

However one major theme does seem to present itself, Jane herself goes from a powerful woman with passion and desire, and by the end is a rather demure woman who seems to have lost the spark that made her an engaging character. The final pages show she has regained some of her passion, but it adds to an ending that seems to gallop towards a nicely tied up ending including a coincidental cousin that barely appears before suddenly becoming the centre point of the entire plot, and may leave a reader of this as a stand-alone novel scratching their head and wondering exactly what happened.

In short read the other three before arriving at this one, a well written tale with two characters that are both easy to engage with, the smut doesn’t exactly overwhelm the entire novel, but what is there is well written and believable.