Dead of Winter (The Arcana Chronicles) by Kresley Cole 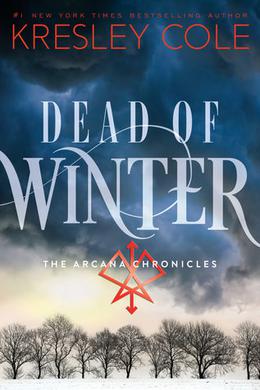 This book almost made me throw up.

I have read a lot in my time. Difficult books. Emotional books. Heartbreaking stories. In my day job I have had to deal with horrific human situations. So, when I say that this book almost made me lose my lunch, that is a big thing.

I wondered how this extremely violent story of supernatural teens mixed with various humans living in a post-apocalyptic world could somehow have slipped into the category of romance novels that I am asked to review. Dead of Winter is somehow meant to be read by a young adult audience, but if this is what passes for popular content for young adults these days, then we’re in big trouble people...

This novel is literally written at the skill level of a gifted middle-school student - one who knows enough to have a large vocabulary, but unfortunately lacks the sophistication to weave a story of magic and wonder with juicy bits of smut in-between. The story is a confusing mish-mash of adventure, paranormal activity, incestuous innuendo and action, torture (the less said about that the better, though it trails sadistically throughout the body of the book) and anything else you care to throw into the mix.

The Arcana Chronicles appear to be the offspring of an arranged marriage, albeit a polygamous one, of The Hunger Games, The Walking Dead, The Road, Game of Thrones and various bits of Greek Mythology (think Cyclops only morphed into a wolf-like thing). Gratuitous is another good descriptor of this unholy mating of genres. It kind of ticks me off when publishers appear to be trying to cash in on the fame of other successful franchises. On one hand I understand that if the audience wants that type or style of tale, great, then feed it to them. But PLEASE, at least don’t insult us with poorly written, almost impossible to follow narratives that make a mockery of character development and well-thought-out worlds, or at the very least, better-thought-out worlds and scenarios than the ones we encounter in Dead of Winter.

As for the hero and heroine, we are introduced to the Arcana Empress Evangeline and Jack, a bayou-accented Louisiana native, who have this ‘thing’ between them that was only consummated once, but apparently was so good that they promised themselves to each other. As the story ricochets onward between action attacks and magical powers, it slowly starts to make some wispy sense about the different games and incarnations of characters and the myriad rules (which often appear and are explained at just the right time to save someone’s life, surprise, surprise), so that you can just start to make out the purpose of all of the killing and attempted killing.

It appears that the main premise of Dead of Winter is for Evangeline to rescue Jack, the attempts of which take up the entire first half of the book. That is when things start to get slightly more interesting (since now is when you might begin to understand who is allied with whom), as Jack finds out that his lady love was up to some monkey business with the stud-muffin Death while he was away. Now Death has somehow gotten it into his gorgeous blonde head that Evangeline is his wife. While there is a kind of love-triangle - or love-figure-eight (as each of the two principal characters have another secondary love interest), the constant confusing action and fighting really overshadow the romantic bits of the book. This is a shame because when the romance comes, it’s actually sort of nicely written in a basic romance book kind of way.

Oh, and importantly, I forgot to add that everyone in the book seems to have two or more names, one formal: “The Empress” and one casual: “Evangeline” and one nickname: “Evie”. As well, everyone seems to belong to or head up an alliance, plus they may be Arcane which means they have special powers or they might just be human teenagers or perhaps animalistic creatures or are in the process of being turned into zombie creatures. They play in “games” which can last ‘I don’t know how many years’, but they can reincarnate or survive or clone themselves, yet retain selective memories of past games...and really...really… - it just makes my brain hurt.

Which kind of sums up how I feel about this book.

So much of this novel is a clusterfuck of confusing and gratuitous scenarios. The torture scenes, the incest of the murderous Twin Arcanas, is just so over the top, that when you encounter lines like “Blood spurted like a mall fountain.”, the magic that was never quite there, is gone again.

The truth is, if you haven’t read the first two books of these chronicles (and I haven’t), then forget about this one, because it will be an experience like reading Hegel in philosophy class: you won’t understand any of it until you reach the end of the book, at which point you might get an idea that it was about Jack and Evangeline figuring out if they really loved each other enough to stick it out in their crazy world.

Now, if you can accept that premise and you’re up for the challenge of keeping track of approximately 25-30 people/creatures/immortals (I couldn’t tell which were which half the time) who are either a part of the action or referred to in the first two chapters alone, well, I wish you all the best. Seriously, the only things missing from this book are giant mechanical spiders and perhaps the road warrior, but there is always hope for the chronicles as they continue.