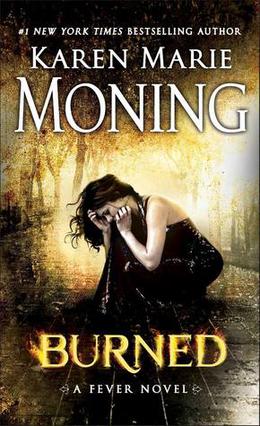 'Burned' is the latest instalment in Karen Marie Moning's Fever series, and what a sizzling book it is! Mac and Barrons have been brought back to the forefront of Ms Moning's storytelling after her last book 'Iced' mostly concentrated on Mac's former sidekick-turned-enemy Dani. And the story kicks off straight away in the hottest way possible. Flashing back to Mac's arrival in Dublin almost a year ago, through a Barrons POV it is revealed to us that our favourite sparring couple actually got to know each other quite thoroughly rather quickly. Nice! Or rather not, as Barrons ends the night by removing Mac's memory…

Sponsored links
Karen Marie Moning is a fantastic writer, both in style as well as technique. Her skill becomes apparent in how she writes the different point of views. Each character has a very distinct voice and through her writing the author not just pushes the plot forward at an exhilarating speed but also enriches the fabric of the world by giving glimpses into their personalities, backstories and emotions. Considering the complexity, and longevity, of Ms Moning's characters that makes for a spellbinding read. Barrons POV is especially fascinating as you get glimpses into his not-very-human thought processes and I only wish that we will get more of those in the next books!

'Her eyes are green, angry. Her nipples are hard. Lust is absurd. It strikes in the strangest places at the oddest times. She doesn’t even realize she’s feeling it. She’s erected a barricade of propriety and lies between us. I despise the type of woman she is. I loathe her soft pink innocence. My body doesn’t concur. I wonder why her? Why not, say, a streetlamp, for all we have in common? She’s chiffon and satin ribbons. I’m raw meat and razor blades. I have never been drawn to my opposite. I like what I am.' (Barrons POV)

In previous books I sometimes wished for more Mac-Barrons interaction. In 'Burned' this wish was granted and in a way that did not disappoint. I love their dynamic even though you can call it dysfunctional, in fact it definitely is, but it is dysfunctional in a way that works for the couple… bear with me.
In romance books it is only too common to create angst-y misunderstandings which are then used to create tension: will the relationship survive it? (Suffice to say, it will, so it is not a massively interesting plot device.) In 'Burned' we have a relationship between two characters who do not easily trust and are weary of getting too close to another person. Furthermore, both are prone to out and out questionable behaviour in general which does not help. Yet their relationship and feelings at this point are never in question, they are with each other and both know it. They also respect each other for who they are. So instead of angst, we get massively enjoyable, banter filled quarrels, fights for dominance neither seems too upset to lose, and you get the feeling that our two protagonists savour them just as much as the reader.

As for the actual plot, it is about establishing order in a post-war society, creating new alliances and settling old scores. As always with Ms Moning's books, nothing less is at stake than absolutely everything. The world she has created through her prose and ideas is incredibly rich and vast and at this stage goes far beyond a romance story but is a rather epic tale. Which makes it even more fascinating that she still manages to sneak in love stories and smut and hilarious dialogue all the time. There is a subplot which addresses a grievance quite a few people had with 'Iced' and without saying too much I really liked the way it was resolved - and the next book set up!

For new readers there is an appendix at the end of the book, providing a guide to the people, places and things that have popped up in previous books. Even though that should be enough for newcomers to be able to catch up and enjoy this book, I'd still recommend to read the previous novels first.

I am massively looking forward to the next book which is expected to come out later this year.