In For the Kill (McClouds & Friends) by Shannon McKenna 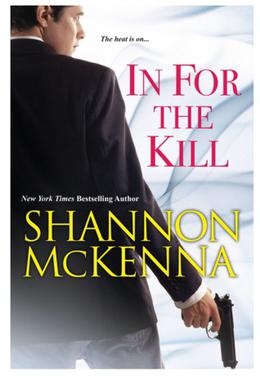 The McClouds and their illustrious group of friends are back in the 11th instalment of McKenna's popular series. 'In for the Kill' is the story of Svetlana Ardova, a former victim of human trafficking now turned anti trafficking crusader, and ex-cop Sam Petrie who has had his eyes on Svetlana for years. For fans of the series it will come to no surprise that it is finally Svetlana (or Sveti) and Sam's turn, as McKenna has been given her readers small glimpses into this budding (if mostly antagonistic) relationship in her previous books. But while the previous titles in the series are well worth a read, it is by no means necessary for new readers to catch up on them first. McKenna does a fine job setting up all the main players and back stories in the first chapter, which not only involves a wedding, an altercation with a mafia boss, but also the heroine's and hero's first sexual encounter and a kidnapping. And in true Shannon McKenna action-laden style, off the plot goes on its high octane ride…

Sponsored links
McKenna is true to form in this suspenseful thriller, that takes its readers from Portland to Rome and into the Italian countryside. One could make the point that the plot is quite over the top, implausible at times, a roller coaster ride of twists and turns (which at times stack up a bit too neatly, especially towards the conclusion of the story). Or, one could just sit back and enjoy the book for the unapologetic escapism it provides. I most certainly did. The plot is starting off with a bang, and is only gathering speed along the way, with some banter filled sexual encounters in between. One word of warning: Like most of McKenna's other books as well, this one is not for the squeamish, with graphic violence aplenty.

For all the action and suspense, for me the book was at its best when it came to the relationship between Svetlana and Sam. McKenna has a true knack for writing characters which perfectly fit the traditional romance book mold, but are more than just simple stereotypes. Svetlana is beautiful, young and, yes, still a virgin, with a tendency to get herself kidnapped. But she is also a strong character right from the start, with real agency, who retains her autonomy throughout the book. She is also not overwhelmed by Sam, even though he is demanding, possessive and at times overbearing. In fact, she is capable of handling him just fine. Sam on the other hand, for all his alpha male attributes, is not without self doubt, has his emotional moments, and is from the very beginning not afraid of making his feelings for Svetlana known.

What I liked most about the relationship between the two of them, and I liked a lot of aspects, is that for all the drama that was going on they dealt with each other in a very reasonable manner. And I am aware that it should be expected and yet we know that too often in romance books the heroine and hero seem to indulge in their very own brand of dysfunctional relationship. Not so in 'In for the Kill'. Although both protagonists have their moments of boneheadedness, they usually come around rather quickly and it is delightful to read exchanges such as:

Svetlana: “You’re wrong.” She sat up very straight. “You’re being irrational. I understand your feelings, but I won’t be controlled by them. I’m sorry it makes you angry. Bottom line? It’s not up to you. This is my decision.”

Or, in another part of the book, Sam:

“Okay, here goes,” he said. “I was a controlling dickhead this morning. In bed and out. I apologize. I will never do that to you again.” She blinked up at him. “Ah . . . thanks.”
“Don’t thank me yet. I’m not through,” he said. “Well, then. Finish, by all means.”
“I accept that I behaved badly,” he said. “But I have to be able to trust you. We’ve got to work as a team. You can’t run out on me. It was stupid and lazy not to face me down. Not to be straight with me.”

You kind of want to hand this book to every romance book writer as an example of good conflict management between couples...

Finally, you cannot review 'In for the Kill' without talking about the sex. Because the sex is just hot. And it goes to show that one doesn't need to incorporate BDSM, menages, toys & and what not to write superb sex scenes. Not that there is anything wrong with the former either, but it is great to read such expertly written scenes which do not rely on extra props. The one thing I struggled with was the author's vocabulary however, as 'girl lube', 'muff' and 'stiffy' are not exactly words that get / or keep me in the mood. What definitely came at some surprise, as this is a romance novel after all, was that the sex felt real in a way. Even though, of course, the hero is attuned to his heroine's needs on an almost spiritual level and she in turn picks up the skills rather quickly after initialisation, they don't just have magical unicorn sex all the time. Instead, the sex is very much connected to the story in that it shows where the protagonists are emotionally, and traces beautifully the development of the relationship between two people slowly starting to understand each other and themselves as well.

Overall, the books comes highly recommended, with 4.5 out of 5 stars, and now I need to go back to re-read the previous books in this series.

The book is available for pre-order now.