Bound by Flames: A Night Prince Novel by Jeaniene Frost 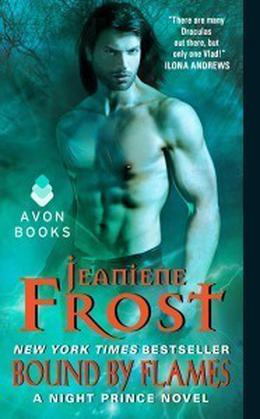 Bound by Flames is the third book in Jeaniene Frost's Night Prince series and contrarily to previous plans NOT the conclusion. The final book is now planned to be released in 2016.

Sponsored links
It is impossible to go through life unscathed is the theme of the series and the main sentiment in Bound by Flames. It starts with Leila, the heroine of the books, who has been left with scars both literally and figuratively after a tragic accident not only killed her mother but also triggered powers within her which would result in a life of loneliness and isolation. At the start of the first book, estranged from her family, she works at a carnival. When she gets abducted she uses her powers to call out to the only man who promises help. This man turns out to be Vlad, a vampire of legend, in fact THE vampire of legend: Dracula.

Much of the charm of the first books came from the way Ms Frost wrote this legendary figure. Vlad is dramatic, charming, flamboyant and definitely true to his nick name The Impaler. Especially in the series starter, Ms Frost avoids the temptation to give him a romance hero make-over and instead presents the readers with a protagonist who rings true and can be easily imagined as the man behind the myth. Vlad is appropriately brutal and archaic, a prince and leader of armies who shows no mercy to either friend or foe. The juxtaposition of his rather medieval world views and actions and the heroine's modern world sensibilities is what made the first two books a lot of fun to read. Unfortunately, much of this is lost in Bound by Flames. Not that Vlad is doing a total 180, but he seems to mellow out as part of his redemption arc and I would have wished for a different character treatment.

Bound by Flames picks up where the last book ended: Leila and Vlad are hunting the master vampire's arch nemesis who is not only responsible for recent murder and destruction but also, as it turns out, for much of the baggage Vlad has been carrying around with him since his human days. As usual Ms Frost excels at writing action packed adventures. At times incredibly gruesome, the pages fly by as the plot moves forward and I had no trouble whatsoever reading the book in one go as I was massively entertained throughout.

It is impossible to go through life unscathed. Both Leila and Vlad are characters forged by the traumas and tragedies of their pasts and Ms Frost explores the question of whether this is something to regret or embrace. Probably not a coincidence in this regard is Leila's gift. She is able to 'see' a person's greatest sin at first skin to skin contact. And as much as this skill is used to fight their enemies and to propel the story forward, it also underlines one important point: We are all creations of our past experiences and losing those would mean to lose ourselves. For the heroine it takes an actual shedding of her skin, a loss of her scars, to realise that.

As much as I usually enjoy the author's preference for strong heroines who are able to pick themselves up and to move on, especially considering the themes of the book it sometimes just seemed too easy this time. Equipped with awesome powers and an even stronger survival instinct one hardly has to worry about the protagonists. On the one hand their abilities make for great action laden scenes, on the other hand there is a danger of losing the emotional connection to the characters. If the fallout from week long torture is only two days of tension between Leila and Vlad, then there is nothing much left for the reader to be anxious about.

Despite the few minor points of discontent I thoroughly enjoyed Bound by Flames. Not only is the book a very entertaining paranormal suspense, but also a thoughtful exploration of what it means to live with one's scars and how to move forward without losing one's past.