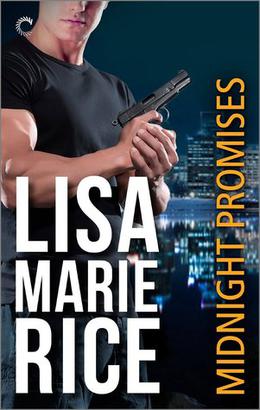 Midnight Promises is a suspenseful romance that, while being set in the present, owes its central plot to every thriller author’s favorite American conflict: the Cold War. When prominent Russian physicist Nikolai Darin defects from the Soviet Union by faking his own death, he and his family--including his unborn baby daughter--get a new beginning in the U.S., albeit one marred by layers of self-preserving secrecy. Decades later, however, Colonel Vladimir Borodin, a former KGB officer, uncovers the truth. While Darin has long since passed, his secrets are still alive, and Borodin is determined to get to them--through Felicity “Ward,” Darin’s adult daughter.

Sponsored links
So, there we go. Hijinks ensue, and the now-hunted Felicity just happens to tumble into the arms of former Navy SEAL medic Sean “Metal” O’Brien. (Funny, how romance novel heroines are always having these strokes of luck.) O’Brien is gallantly, if very promptly, willing to throw his hat into the ring as Felicity’s protector. Gentle and meaningful sex scenes naturally follow, and the pair, together with a small group of friends, set out to stop the villainous former KGB Agents.

Despite taking a little while to warm up to Midnight Promises, I liked the book overall. I’ll admit that I saw “Cold War secrets,” “nuclear physicists,” and “Navy SEAL hero,” and was skeptical at first, but the leads are charming enough to carry the show, even while the plot itself can feel like a mad dash to a foregone conclusion.

Felicity is funny and likeable as a self-described “nerdy” couch potato. She’s quick, resourceful, and brilliant in a tight spot--she saves herself, and doesn’t totally wilt in the face of danger. She’s also a “hacker” genius whose nerd-cred references are fairly accurate, if a little forced. Liking Doctor Who may have made you a glasses-wearing mouthbreather at some point, but Who fans are hardly ever chased around by crowds pointing and jeering at them these days. Likewise with both the Stars Trek and Wars, unless you actually speak Klingon or spend your evenings writing Firefly/Jedi crossover fan fiction.

I bring this up because, while I was delighted to have a computer genius for a leading lady, I absolutely cringed every time she referenced the vague but oft-mentioned “nerdy guys” that Felicity had dated in the past. Guys whose “voices rose two octaves and their hands shook” when they were aroused, who “wouldn’t notice if she grew two heads” and who she had awkward, perfunctory sex with. What?! I realize this may be difficult to grasp, but intellect and sexuality are not mutually exclusive, my friends. Not all smart or “nerdy” men are quivering, boob-obsessed man-children with sweaty palms. Felicity is a fully-formed human, whose love of televised science fiction and the recreational uses of genitalia don’t seem to clash. Is the intention to make Sean “Metal” O’Brien seem that much more manly by comparison? Because he’s a former Navy SEAL who is roughly the size of a giant and can murder (and fix!) people with his bare hands. I don’t think he needs the help.

Speaking of “Metal:” I was pretty happy with his character, and how he was written. A little bit of the nervous, almost bumbling gentle giant, a lot of the ultra-capable badass. He also does a pretty good job of focusing on Felicity’s talents in addition to the standard page-after-page of “soft limbs, supple skin, blahbetty blah no one’s eyes have ever been this beautiful.” Although he can wax poetic a little too often, especially for a fairly quiet guy (in the first third of the novel, especially, I found myself muttering, “oh my god, shut up and get back to the PLOT”) it’s still nice to have hero be all hot and bothered over a girl’s resourcefulness and intellect in addition to her unimaginably perfect nipples.

The plot of Midnight Promises is, in itself, pretty gripping. Secrets abound, nuclear weapons are involved, the KGB is all over the place. Action! Intrigue! Murder. In the right hands, this could be turned into a totally watchable action flick. (Dream casting: Emma Stone as the hyper-intelligent Felicity, Chris Hemsworth as our Navy Seal, Brian Cox as the dastardly Russian, doing that accent he had in Red.) You could totally keep all the sex stuff, too, and honestly, it would be freaking great. Dear readers: which one of you is secretly a Hollywood executive? Let’s make this movie. We’ll be rich.

I have two complaints, for the finicky readers in the audience. First: for the record, none of this is how hacking or computers works. Like, this could not be farther from how any of this would go down in reality. Could she hack into all of these sites and pull information out of them? Possibly, depending on the site and her prior knowledge of it and how it works. Could she do in in about fifteen seconds? No. That being said: movies and books do this all the time, so I can’t be too hard on this book specifically. We’ve collectively decided that, in the right hands, computers are magic and people who know how to use them may as well be wizards. Fair enough.

Second: There is no Burlingham, Vermont, and that drove me a little nuts. Like, you kept all the other city names, New York, Portland, D.C.; why “Burlingham”? I thought it was a typo at first, but it happens multiple times. That said, if Burlingham is indeed real, has an airport, and has somehow evaded being indexed in any way, shape or form by Google, I will send all of you a nice note of apology.

All in all, I was happy with Midnight Promises, and I look forward to reading any other novels in the series, one of which will hopefully be Felicity and Sean solving mysteries as a nerd/meathead married couple private detective team (look, a girl can dream).