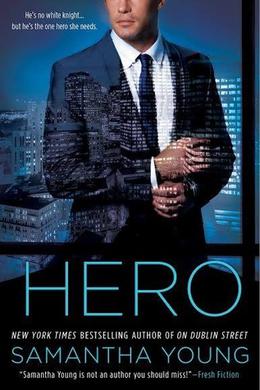 Samantha Young’s Hero pits the charismatic, wealthy Caine Carraway against Alexa Holloway, a gorgeous and likeable smartass who has a dangerous secret: her father, the shiftless heir to one of Boston’s first families, was responsible for the death of Carraway’s mother. When this bubbles to the surface during a high-profile photo shoot, Carraway is furious--and Alexa finds herself suddenly unemployed. Incensed that she’s being punished for her father’s sins, Alexa bluffs her way into Carraway’s office the following day to demand that he set things right. Although Caine rejects her request, he comes back with a counter offer, telling Alexa that, if she’s willing to be overworked (but richly compensated), she can come to work as his new personal assistant.

Sponsored links
So Alexa finds herself working for a man who loathes her, and yet--in tried and true romance novel fashion--Caine and Alexa find that they have truly unbeatable chemistry. Though they ought to loathe each other, sparks quickly fly. While Caine makes Alexa miserable during work hours, it doesn’t take long for them to tumble into each other’s arms, and for Alexa to realize that this is more than just sex. Caine, though, holds her firmly and coldly at a distance, even after it becomes rampantly apparent that he cares for her deeply. Can Alexa break through Caine’s brusque exterior and his hatred of her family? Or will she become just another one of his emotionless affairs?

The overwhelming impression I had at the end of Hero was one of sweetness. Not an overt, saccharine Disney ending, certainly, but just a sense of completion. The story at the heart of the novel is one of the most accurate and sympathetic portrayals of a relationship that I’ve read in recent memory, despite a handful of odd romance novel plot twists (Murder plots! Male prostitution!) Part of the appeal of this plot is how these two characters don’t fall in love immediately: we follow them from lust, to affection, to frustration (and a touch of disgust) to actual love, which is nice when contrasted with novels that have sort of a single crux in the middle (insta-love, single obstacle, BAM. MARRIAGE). It’s a story we’ve all seen play out, in someone we know, or in ourselves--two people who are clearly besotted with one another but just a little too damaged to take the leap.

Alexa, for all her resilience and snarky humor, is basically a giant, walking ball of daddy (and grand-daddy) issues stemming from a lifetime of guilt, disappointment, and rejection. Don’t misunderstand me: Alexa for the most part is fun and charmingly imperfect. She may need to get her head out of her ass on occasion, and definitely could stand to be less impetuous, but that’s why you like her. Her stubbornness is an asset, more often than not, and as a narrator, she injects some much-needed humor into the melodrama. Still, for all of that, she’s carrying around a lot of heartbreak, and it shows.

Caine Carraway, in sharp contrast to Alexa’s charming mess, is a man of restraint. So much restraint, in fact, that he’s incapable of relaxing his self-imposed barriers. This, combined with the on-again off-again nature of the plot, combine to make Caine incredibly frustrating. He’s a bit of a twit, really; he can’t seem to wrap his head around his own feelings until he’s forced to by outside circumstances, and as a result it’s a little hard to stay sympathetic towards him in the third act. It doesn’t help that the revelation of the “dark secret” keeping him at arm’s length from Alexa is downright silly, and I’m glad it only makes the one appearance. It’s one of those “if that was the plot you wanted, you should have written an entire book about it” twists: it’s mentioned, the audience is supposed to wet themselves with surprise, and then, thankfully, it’s gone and never mentioned ever again.

Set on the backdrop of Boston’s blue-blooded “high society,” Hero focuses heavily on whether or not the “sins of the father” can really be forgiven, which I found really engaging. We believe in this idea, theoretically--it’s part of the American ideal, after all!--but it can be so hard to do in practice. (I mean, if he had one, I can’t see any of us beating the doors down to play naked Twister with Charlie Manson’s kid.) While the novel’s last twist seems to come completely out of left field, it’s at least thematically appropriate, and well-handled. In the world of the reputation-obsessed elite, your fortunes are built and lost on public perception; it’s unsurprising that familial ties would be just as dangerous as they can be beneficial. Additionally, while Caine falls easily into the “rich alpha male” category, it’s downplayed more than I expected, which was refreshing. While his wealth is certainly vital to the plot, Young manages to resist beating her obscenely expensive dead horse.

A quick aside: Effie wins a brand-new prize I’ve just now invented for “World’s Most Adorable and Scene-Stealing Romance Novel Side Character,” and I’m frankly a little miffed that the entire novel wasn’t just Words of Wisdom From Effie, possibly punctuated with scenes of our two leads having sex just to keep things spicy. I want to be best friends with Effie. Everyone needs a spunky geriatric neighbor who bakes pies! They ought to be standard issue. Effie does have a job, plot-wise, that she does rather well--humanizing Caine when we’ve become convinced that he’s an irredeemable jackass--and it’s a little too convenient that she’s a nice parallel for Alexa’s issues, but mostly, she’s just beyond precious.

Okay. Had to get that one out of my system. Now that that’s taken care of, let’s talk about the fun bits!

You guys, the sex here is GREAT. They do just a whole bunch of really wonderful boinking. Boink boink boink, all over the place. Their first scene is especially fun: lots of heightened emotions, fancy clothes, and a desk that will never be quite the same again, all combine for a delightfully good time. Young knows how to write sex scenes that are arousing and fun without getting lost in awkward synonyms or overly-detailed descriptions, and it really pays off. Alexa and Caine’s sexy-time antics keep the plot from dragging, and provide plenty of pages to “bookmark” for “later review.” What’s more, the novel does an equally good job of painting the highs and lows of a relationship where raw sexuality is having to fill in for genuine emotion, and the strain makes for great drama and even better sexual tension.

All in all, I really enjoyed Hero. While the overarching plot had its flaws, the central love story was one of the most emotionally authentic I’ve read in a long time. That, combined with likeable characters and some excellent wank material, makes for an excellent read.