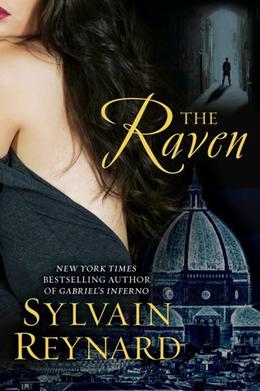 'The Raven' is the first book of the 'Florentine' series by Sylvain Reynard, who has also written the very popular 'Gabriel's Inferno' books. For fans of that series it might be interesting to know that the Professor and Julia are making an appearance in 'The Raven'. However, let's start from the beginning...

Sponsored links
Raven Woods is an American art restaurateur working at the Uffizi Gallery, the famous museum in the beautiful city of Florence and host to an incredible number of Italian masters. Her life changes forever when one night she intervenes in a horrible beating of a homeless men and the attackers turn to her...
The next day (or so she thinks) she wakes up with a headache, not remembering the last night, not knowing, in fact, that over a week has passed since that night. Later she learns that, whilst she was missing, the Uffizi Gallery was robbed of some famous pieces of art which were on loan to the museum by generous benefactors Julia and Gabriel Emerson.

William is a centuries old vampyre, the prince of Florence and ruler over an underground vampyre society which claims the city as its own during the night. Long convinced that there is no mercy or love left in him, only a fierce regard for justice, one night he happens upon Raven in peril…

Paranormal romance? Check. Atmospheric story settings? Double check. Vampires! And heroes haunted by their past? Check. A heroine with an interesting back story? Yes, please. Secret societies with their own rules, traditions and hierarchies? I love it! On paper the book has all the ingredients that I usually love in my romance books, and yet the book has left me thoroughly disappointed.

The main problem for me was the romance story at the heart of 'The Raven', or actually, the lack of a romance story. When they meet, William smells Raven's sweet blood and is like 'Oh, that's nice, I want!'. Throughout the book he claims that he desires her, that he admires her goodness but you never actually see him falling for her. And then he maintains that vampyres just cannot love… until he suddenly, conveniently is capable of doing that the next day.
Raven seems to be put off by him most of the time. Sure, he is hot, but he is also dangerous, evasive, brutal and quite mercurial in mood. She really does not want anything to do with him… until she suddenly, conveniently loves him.

Throughout the book I got the feeling that Raven mostly fell for what William saw in her: an attractive woman he desired. Instead of being in love with him, she seemed to be more excited by the idea that a hot guy, a vampyre prince, no less, would not only notice her but actually think her beautiful. That made me almost feel for bad him, but only almost because I really did not like him at all.

Look, I think that it is always a bad sign when a character gets introduced by a statement like this:

'His considerable strength was magnified by his intellect and his patience'

I have read too many books in which such statements, which in my mind should be demonstrated through actions rather than just stated as fact, couldn't have been further from the truth. And unfortunately this is true for William in 'The Raven' as well. Whenever Raven does something or reacts in a way he does not like, he gets angry. And passive aggressive. And such behaviour should ring all alarm bells, rather than making Raven all wet and willing.

“What are you doing in my bed? You made it quite clear whatever was starting between us ended.”
“I was worried about the Emersons.”
“Of course,” he scoffed. “Raven is savior to the world. I believe someone else lays claim to that accomplishment."

William undermines Raven and silences her whenever he is not happy with the directions of her thoughts and opinions. In addition, his moods are incredibly mercurial, shifting from humour, to desire, to anger in seconds, which makes it not just difficult for the reader to understand him as a character, but also seems downright abusive towards Raven.

He lifted a hand to her face, his touch light and soothing.
“Come to me tonight.”
“I’m not promising to sleep with you.”
“Why not?” He kissed her again, this time gently.
“I’m worried about my heart.”
He arched an eyebrow at the space between her breasts, his lips curving up into a half smile.
“Not that heart.” Her eyes slid to the side. “When you laugh at me, it will hurt.”
William’s expression grew thunderous.
“Have I given you any indication that I find this funny?”
“No,” she whispered.
“What I want most at this moment is to peel your clothes from your body and place my tongue between your legs.”

All in all, he comes across as very immature and creepy, which belies his supposed ancient age and proclaimed patience.

It is a shame that I struggled so much with the characters and central love story as there are elements in the novel I adored very much. The way Mr Reynard incorporated the city with its architectural riches and art into the story was lovely. Florence became a main character itself, enhancing every scene with a moody and gothic atmosphere that befitted the paranormal themes beautifully.

Also interesting were the glimpses into the underground vampyre society and I imagine we see more of this in the future, as the plot continues in the following books of the series.