Once and Always by Julia Harper 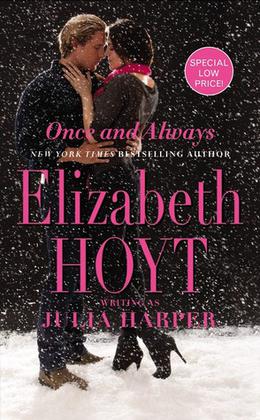 Maisa and Sam are opposites. She’s a feisty city girl, decked out in de rigeur black, black and more black, with a chic short spiky hairdo, and he’s a small town sheriff, all lean hipped and laid back wearing an actual cowboy hat. This unlikely pair shared hours of passion one hot night last summer, and now he waits to see her whenever she comes into his town to visit her uncle. She avoids him because of her family's past ties to organized crime, thinking they could never be together. He hopes to make her see reason. And by reason, he means him!

Sponsored links
This book, without putting too fine a point on it, is a panty-soaker, through and through (pun intended!). It’s just what the doctor ordered for a mid-winter break. This is a fabulous book to read if you’re snowed in, or lucky enough to be stranded on a sunny beach with nothing to do but indulge. It’s an escapist fantasy of amazing sexual chemistry, and Sam is a mid-west fantasy man come to life. Imagine being stopped by a tall, sexy, ex-army man in mirrored aviators who speaks softly and carries a wallop of a police baton in his pants...

The plot involves Russian Mafiya (yes, it is spelled that way throughout the book), and while there is a tiny bit of gore, a reference to some of the Mafiya leader’s misdeeds (something about a tongue being nailed to a dead guy’s forehead..and yes, I just vomited a little bit in my mouth), it begins and ends there. Otherwise, Once and Always is an attention keeping romp of a ride. While the action is darting all over the place, it gives Sam enough chances to be the hero and redeem his shame from his time in Afghanistan, all the while bedding the beddable Maisa any chance he can get during the realistic pauses in action (thank you electricity cutting blizzards!). While the mafiya angle is a bit corny, it’s as good as any of the other options the author could have chosen as a plot focus, so just roll with it, as Ms. Hoyt has some good stuff in store for her readers.

The sexual tension set up between Maisa and Sam has to do with the fact that her family’s origins are in the Mafiya and how she feels that fact can never be reconciled with the good guy lawman that is Sam. Except that she is drooling hot for him and he is sexily serious about wanting her to be his woman, so much so that everyone in the small town knows about his year-and-a-half-long dogged pursuit of her. The funny thing is, that when the sex does happen, she is often the aggressor, though the build-up is initiated and steered by him. Maisa hits a homerun for all women when she says “You knew exactly what I was like when you decided to keep chasing me, Sam West. I’m not some sweet young thing who’ll tell you your cock is the biggest I’ve ever seen. I’m a cranky bitch with a career, an education, and opinions. Take it or leave it, but don’t start acting like you had no idea who I am.” And Sam loves her all the more for her being true to who she is.

It is very evident that he men in this book certainly like their women strong - as sharpshooters, as intelligent counterparts, as co-workers (Betty and the Police Chief) and as lovers. There are about four couples who are given some ‘screen time’ and have their relationships fleshed out to some degree. Doug (another policeman) and his lady even have their story continued in one of Ms. Hoyt’s upcoming novels which is previewed at the end of my eBook copy. However, Molly and Karl are the couple that seem to get the most time in as the secondary romance of the book. It’s amazing how all of the men in this book care for and protect their women while still being awed by their ladies kick-ass-i-ness. The women shoot, kill, bargain and plot, right alongside their men.

It takes a chapter or so to get the feeling for who Karl who swoops in as the comic relief in this book, as he does not seem to be one of Sam’s direct friends. Eventually we learn that Karl is from the local Reservation and is hawking faked arrowhead artifacts on eBay. Karl is something of the town handy-man, a not quite brilliant-not-quite-slow-witted, good-time guy with a heart of gold. He’s contrasted with a highly polished Indigenous lawyer type who happens to be searching for said pilferer of his people’s culture, and both seem to be competing for the petite and sharp-shooting Molly’s attentions. While it’s refreshing that First Nation’s are featured as real human friends and coworkers, I’m not quite sure that I’m ready for Karl to be the butt of jokes. It seems like he needs a little bit more respect, even though his bumbling is eventually redeemed through his daring-do with a dogsled in helping to defeat the Mafiya villains and get his girl in the end.

One thing I really loved about Ms. Hoyt’s writing is her way with a turn of a phrase. Lines like “Her tits looked kind of happy to see him.” kept me laughing, and softer moments such as “Her cheeks were pink, a crease from the sheets still imprinted on one, and her hair was flattened against the side of her head from sleeping. She was the most beautiful thing he’d ever seen.” help remind us that love and good loving doesn’t always happen when we are manicured to within an inch of our lives. Though I do challenge any writing to make a great love scene out of hairy legs and unplucked eyebrows...cause you know, sometimes horniness just can’t wait until all is groomed with the world!

There is some delicious dirty talk in Once and Always from Sam (of all people -who knew?) and a thoroughly gushing shower scene that sums up what a good romance writer can do when a condom cannot be found - the shower scene is testament to some seriously great non-penetrative sex, and you will for sure need a post-orgasmic snack after reading that particular chapter. And call it corny - a word that keeps coming up with this book, but I just loved the last line of the entire book, especially as it pertains to a man of the law: “Sam West always caught his woman.” (and I am a sucker for good corn!)

If you can live with or suspend your disbelief at the Russian Mob coming to small-town-middle-America believability factor, then you are in for a great treat of romance and smut!