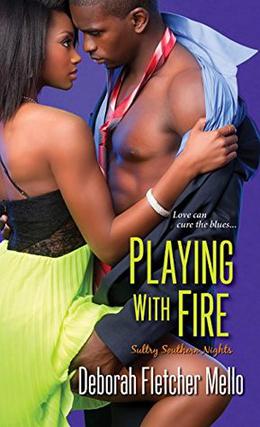 Playing With Fire is a strange sort of romance novel. I say that because it’s definitely a story that straddles a few genres. Since there is romance running through it’s entirety and since Deborah Fletcher Mello is an already recognized writer of romance books, this novel somehow was designated as a romance, though there is so much else that is interesting and enriching that is going on with this book.

Sponsored links
Ms. Mello begins Playing With Fire in the same vein as any run of the mill romance novel - by introducing us to her hero. Romeo Marshall is a tall, college educated hottie running his own throwback Speakeasy-themed bar/lounge/nightclub. While Romeo has had a lot of female attention, as evidenced from the constant touching, kissing and outright propositioning he is exposed to nightly at his club, we also learn that he has never quite found the right woman to hold said attention. Enter Taryn Williams, friend of a past conquest who comes into the bar one night with her girlfriends. Through a series of not very unusual events, Taryn and Romeo eventually start dating and with wonderful results: they fall seriously and deeply in love.

Before you hit the third chapter, it starts to become evident that Ms. Mello aims to delve deeper into the broader themes of love and redemption than is expected of standard romances. Instead, the more dominant themes are ones of father-son love and connection and the underlying importance of an African-American man’s responsibilities to himself, his woman, his children, his community and his God. There is an abundant wealth of material here in backstory alone that Ms. Mello aims to touch on throughout the tale and present day effects of Romeo’s absentee father.

Piano Man has come back to see his son and be near to him without revealing his paternal relationship. He wanders into Romeo’s bar one day and takes up space in his life as the resident piano player. Piano Man wants to confirm what he has heard about his son and to see him in the flesh as there are some hints that his own days may be short. It is interesting that he never defends his behavior in leaving town (though he didn’t know Romeo’s mother was pregnant) and simply offers up his acceptance of himself as a musician who had a burning need to play (which meant he followed the music from town to town). It is, in fact, hard to be angry with an old man like Piano Man, and Mello knows this, using his age and physical frailties to soften our opposition to his choices and the damage they caused. Mello gives him such humanity that she helps us to stop our inner criticism of him and to listen and hear his reasoning and regrets.

This book tries to touch on many of the social issues and ills of contemporary African-Americans and the wider world in general; alcoholism, abuse, anger issues, absentee fathers etc. Most of the issues are given a fair balance through dialogue between the old and the young and those who have experienced it first hand. There is even a brief exploration of interracial relationships: why black women turn to white men and black men turn to white women. Again, although both sides of the argument are given, Romeo makes it very clear that he wants a strong, beautiful black woman like his mama, while his father says it doesn’t matter as long as the woman supports her man. This kind of armchair psychologizing is somewhat overreaching because such issues are a heavy load for any book to handle, let alone one romance book to bear.

The sex in the book is good, though not great, and the sexual build-up is about as pedantic as you can get as you see it coming from a mile away. What is good about the sex however, is that it is connective and it is used to bind the character’s hearts further together. The message of this book, although there is quite a lot of casual sex in the air, is that nothing is better than a strong man and a strong woman working together through life’s adversities and pleasures. In addition, there are a few beautifully written scenes between the Piano Man and Aleta, a contemporary of Romeo’s now deceased mother. As an older couple making love they are sweet, funny and well past their headboard knocking prime, but the tenderness and simplicity of how they communicate their love and pleasure in one another is divinely written by Ms. Mello, and is a definite highlight of this book. If you read the book for this section alone, it will be worthwhile.

This really is a story about an absentee father making his peace and the abandoned son finding his true self and facing his demons. By joining AA, submitting himself to outside help and the love of his good woman, Taryn (who is a pillar of strength and self-worth), Romeo does an about face from the bender he goes on when all truths are finally revealed. The many social issues will keep you engaged to the extent that the apparent lack of focus on the romance and smut between Romeo and Taryn can be excused. Perhaps this is part of the escapism sought by some in their reading material - that not only will their men be heavily muscled and hot in the bedroom, but that they can also take responsibility for their actions and do right by their women and children.

Playing With Fire will please lovers of Jazz, Soul, R&B and the Blues as both men are involved deeply with music. Songs and their artists are liberally sprinkled throughout the text. Music is used to unite, soothe, express sorrow, regret, love and the myriad of emotions we humans experience. Ms. Melo also has a gorgeous vocabulary used to describe the many delicious hues of skin we encounter in the story. Cocoa-kissed complexions and dark chocolate draped muscles make for enjoyable, moist and artistic reading. Bold statements like “She was a round, busty woman, warm and soft like freshly mixed biscuit dough ready for kneading.” will keep you chuckling, and hopefully distract from some of the campy North Carolina accents used (“I’se got something I wanna show you!”).