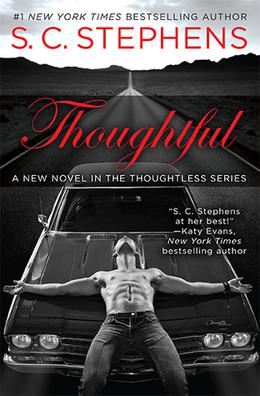 Thoughtful is the new, alternate POV addition to S.C. Stephens Thoughtless series. It’s a retelling of the titular original novel from the perspective of its bad-boy male lead, Kellan Kyle. For those of you who aren’t familiar with the original series, Thoughtless (and therefore, Thoughtful) begin when Kellan Kyle’s best friend, Denny, moves back to Seattle with his live-in girlfriend, Keira, in tow. Needing a place to stay, they decide to room with Kellan - who  immediately falls for Keira. Denny conveniently departs not long after on an extended work trip, and before you know it, Keira and Kellan are in bed together. Once they’ve hooked up, the main conflict of the novel begins. Will Keira leave Denny for Kellan? Or is he going to lose the love of his life?

Sponsored links
I’m just going to come out and say it - this book bordered on being unreadable. I’m not unaware that Thoughtless has a devoted fanbase, and to those fans I’d like to extend my apologies, but Thoughtful reads like a blend of a rejected telenovela screenplay and the weepy high school poetry you kept hidden under your bed.

Kellan Kyle is supposed to be sex on a stick, a rockstar adonis that leaves women weak-kneed and damp in the drawers. Stephens bashes us over the head with this; Kellan can’t go two pages without having a faceless, breathy fan flinging herself at him pelvis-first. The problem is, we spend the whole novel in Kyle’s head, and from that perspective, he’s anything but appealing. I usually wish for more emoting from male leads, but in Thoughtful, I found myself wishing that Kellan would just shut up and do something. Leave Keira. Tell Denny about the affair. Find a new girlfriend. There are options, and any one of them would have made the novel half as long and twice as enjoyable. Instead, Kellan spends most of the novel thinking about his feelings, and boy, does he have some feelings! Kellan is sad. Kellan is conflicted! Kellan is contrite, and a little bit horny. It’s not much more than page after page (after page) of angst-ridden internal monologue that, rather than advancing or resolving the plot, just drags it on for almost 1,500 pages of high school-level drama.

I appreciate that Kellan had a troubled, abusive childhood that resulted an apparent pathological need for sexual contact, but that’s not a turn-on; that’s the kind of thing that people go to therapy for. On top of that, his issues magically evaporate once Keira walks into his life. It’s convenient, in that it frees up more time for him to obsess over Keira’s irresistible smell, but it’s also unhealthy and unrealistic. Sure, he still dwells on his parents’ refusal to love him, but he decides pretty quickly that Keira’s love will heal all wounds. Rather than a sex god, Kellan comes off as an unlikeable, fussy little boy trapped in a grown man’s body. Surprisingly enough, absolutely nothing about that is appealing.

Keira - at least, this version of her - isn’t much better. She spends the vast majority of the novel either loudly proclaiming her indecision or weeping. (Sometimes, as a neat trick, she manages to do both at once.) She’s given the standard Romance Novel Heroine Starter Kit: stunning beauty that she’s completely unaware of, a dash of awkwardness for relatability, and a general demeanor that would make Snow White look like a catty hussy. As a starting point, that’s just fine; however, the only other character development Keira gets is a blushing naïveté about sex paired, inexplicably, with a hysterical inability to control herself emotionally or sexually. We’re treated to scene after scene of “Keira ends the affair,” followed by “Keira suddenly decided to start the affair again!” She’s the kind of girl who cheats on her boyfriend repeatedly but goes into a jealous rage when her boyfriend-on-the-side sleeps with someone else. At one point, she actually steals Kellan’s car in a fit of pique. This is meant to make us realize that she loves him - but it just makes her seem incredibly selfish, and a little unhinged.

Because of all of this, the affair itself falls completely flat. It’s hard to figure out why one should care about Kellan, Keira or their relationship when the solution to their problem is so irritatingly SIMPLE. Leave your boyfriend, or don’t. Stop sleeping with her, or don’t. Do these on-again, off-again relationships drag out forever in the real world? Sure! But the joy of literature is that we can condense six months of repetitive drama into a few pages rather than suffer through it in real time.

Now for the wank material. Sadly, the hump to drama ratio here is WAY off. If Stephens took half of the scenes that end in Keira or Kellan crying and rewrote them as spirited rounds of “hide the sausage, find the bun,” I think the book might just be enjoyable. Even the few scenes we get are so drowned in feelings that I couldn’t get into the spirit of things. During the first sexual encounter we see Kellan have, he stops mid-blowjob to wonder if the woman he’s hooking up with understands “that my life left me feeling vacant inside...I was so f*cking lonely that I almost couldn’t stand it.” What? We’re given no other indication that this woman gives the worst oral sex in history, so I’m forced to conclude that Kellan Kyle secretly doesn’t enjoy having his Happy Harry taken to Tongue Town. A broken man, indeed.

At first, I worried that my dislike of the book was knee-jerk reaction to the subject material. Infidelity is pretty heavy stuff, and I’ll admit that the sex scenes were initially a little  tainted by the expectation that Denny would burst in at any moment to catch them in the act. I realized, though, that the plot isn’t to blame. Adulterous affairs can be pretty steamy, when they’re written well; forbidden love is a pretty hot topic in general. No, the most damning thing about Thoughtful is that it has all the characteristics of your worst ex-boyfriend: lackluster personality, a rejection of personal growth in favor of meaningless drama, and possible worst of all, terrible, terrible sex.