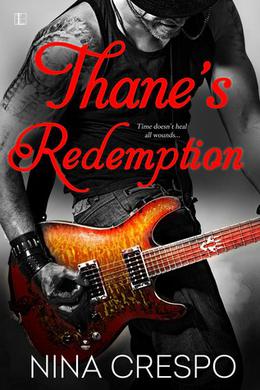 Sponsored links
What with the sweaty hair, overdone tattoos and flame-decorated electric guitar, the cover is, without a doubt, major cheese. The cringe factor made me wonder if reading this was going to be a good idea and right off the bat, I was really glad that the back cover preamble mentioned something about time travel and saving the world or I would not have made head nor tails of the opening scene. But I hung in there, and I ended up liking this book, quite a bit, actually, for it’s solid writing and excellent, excellent sex scenes.

The Thane on the cover and the Thane described within the book are as different as chalk and cheese. Book-Thane is not a caricature of some sleazy rock and roll star. Book-Thane is far hotter and richer a character than his cover portrayal. Thane is a military man who has fought for his country, a man of introspection and honor. He is a part of a band of brothers, all whom find themselves dying in a helicopter crash when a supernatural warrior named Dalir offers them a choice to live on indefinitely (though no one would remember them) and save the world. “This is where fate and chance intersect.” Dalir notes.

Thane and his military buddies now keep themselves busy playing in a rock and roll band in between futuristic time travel missions. Their home club is the Song Club and this is where he meets Celine. Celine is a young woman who suffered the terrible loss of her beloved fiance who was killed on duty in Afghanistan a year ago. Celine has yet to meet a man who can understand her grief and her need to work through it - to understand that a loved one does not disappear from one’s thoughts because others are uncomfortable with the idea of death. Celine’s friends forcibly tart her up, make her leave her haven of the couch and take her to the club for some girl time with martinis, hoping to bring her out of her shell.

There, she encounters Thane in the hallway leading to the ladies room, and sparks fly. The sexual pull between them is insane, and Celine decides before the night is out to give herself up to the pure physical heat that is this man. Thane, to his credit, realizes that what Celine needs is a good roll in bed and a man sensitive enough to her situation to do it. As the evening, and amazing sex goes on, (did I say how amazing the sex is?) Thane begins to realize he has some deeper feelings for Celine, even though he is getting ready for his next mission and will have to leave her and erase her memories of him when he goes. For the first time since he started time travelling, he is torn. “You didn’t leave a woman like her alone. You danced every slow song and held her close. You stole opportunities for deep, long kisses. When you went home, you pleased her in all the ways and positions that made her call out your name.”

Inexplicably, Thane was suddenly given a chance to be with Celine for the rest of their lives, something that was verboten as part of the deal originally made with Dalir that saved his life when his helicopter was about to crash and burn. Though I cheered when Thane saved Celine, the sudden conclusion of the book didn’t enable Ms. Crespo to fully flesh out the relationship between Celine and Thane enough to bridge the first intense sex into the full blown love that we see in the last chapters. We are not made privy to Thane’s past and perhaps telling his story of leaving the mysterious Alice behind would have enriched our understanding of his need for love and thus make his falling hard for Celine more plausible.

Written as is, the first two-thirds of the story are plain ol’ awesome, but the ending is all too sudden and quick with little or no explanation. We’re left with the feeling of ‘What the hell? What happened to Reid? Alice? Dalir? The rest of the team? The biohazard virus? The other-otherworldly forces Dalir was fighting against?’ I also was left with questions about the time travelling itself that were never quite dealt with. My ebook was 169 pages and while that’s an all right size for a novel, it’s just not enough for this novel. It seriously felt like chunks of the book were missing. I think I read this book in literally an hour and ten minutes.

It would have also served the reader well to give more background info on Dalir - the ancient warrior who has connections to powers unknown even at the end of the book. A few more teases as to whom and what he had been in his past would definitely have had me interested in coming back to read Part 2 of the series. I’ll even admit I was actually quite intrigued by the sub-plot to let loose a virus to create an apocalypse on the non-developed world and the fate of that set of players, but just as the action got heated and a few other juicy backstory tidbits got hinted at, those story lines suddenly went cold. As if Ms. Crespo was deep at work when someone said to her ‘The book is being published tomorrow, finished or not’, and this was her compromise - to lock down plot lines mid-flight and tie up loose ends in a hurry.

With a few more chapters that could fill in and bridge the missing chunks of story and plot, this (at times very well written) story could easily have achieved a homerun rating. Thane’s Redemption is heavy on great romance and sex, but low on the connective detail needed to make this book what it could have been - sensational.