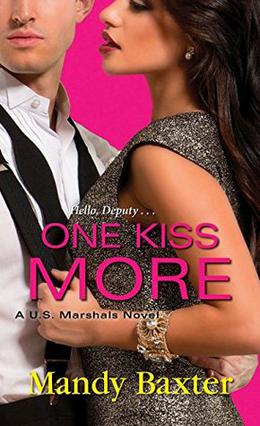 One Kiss More, the second installment of Mandy Baxter’s U.S. Marshals series, is as much a crime thriller as it is a romance - and manages to handle both rather well. With a fast-paced plot, compelling central relationship, and chemistry-laden sexuality, One Kiss More is a pleasant addition to the world of romance.

Sponsored links
Stubborn and surprisingly down-to-earth Emma Ruiz is, when we meet her, one of those girls who is “famous for being famous,” albeit nowhere near Hilton or Kardashian status. Launched into unwilling fame by the high-profile arrest of her father when she was just a teenager, Emma’s spent the intervening six years doggedly trying to prove his innocence and quietly raging at the man who put him in prison - U.S. Marshal Landon McCabe. However, when Emma’s father “escapes” from Federal custody, her plans quickly go awry, and she’s subjected to a wealth of unwanted attention not only from the US Marshals service, but from some very nasty criminals indeed.

Our dashing U.S. Marshal Landon McCabe, on the other hand, is one of those straight-shooting, overly-principled “my word is my bond” types. You know the ones: they only really exist in nostalgia and romance novels, and they’re so damned appealing in print, but you know they would be incredibly frustrating in the real world. Since McCabe was polite enough to stay within the confines of the page, however, he’s rather enticing, and he gets a full endorsement from me. The constant mentions of his rippling muscles and whatnot don’t hurt much either.

Despite coming from an affluent family, Landon has rejected his parent’s dreams that he would follow them into international corporate finance and has chosen a less wealthy but more rewarding career as a U.S. Marshal. Despite being the one who arrested Emma’s father, his priority is the truth, not his reputation, and it doesn’t take him long to feel that something isn’t quite right following Ruiz’s escape. Despite his growing attraction to the feisty younger Ruiz, he tries to keep his distance while solving the case; until, of course, things begin to spiral out of control, and he’s left with a choice; play by the rules, or go get the girl?

One Kiss More is a fun ride, and it knows how to pace itself. We’re thrown right into the action, and it doesn’t let up much until the climax (sexually and literarily). The criminal elements of the plot are fun and well thought-out, featuring a couple of legitimate twists, which is nice in a genre where everything but the romance tends to take a back seat in favor of: “OH HEAVENS, Spencer, I know we only have ten minutes to diffuse the bomb, but if I don’t make PASSIONATE LOVE to you RIGHT NOW I think I MAY PERISH!” Of course, the end does hinge upon a feat of fighting prowess by Landon McCabe that would make a Bruce Willis movie blush. But hey--what else are manly men for, if not to be impossibly dexterous and talented? It’s no more egregious than anything in Die Hard or the Bourne movies, and this has way better sexy bits.

There’s certainly a fair amount of drama in One Kiss More, but Baxter keeps it from veering into melodrama territory, and the plot is fast-paced and fun. Seasoned liberally with a hefty dose of sex appeal and some well-crafted characters, it’s a light read and a pretty sexy way to burn a couple of afternoons.