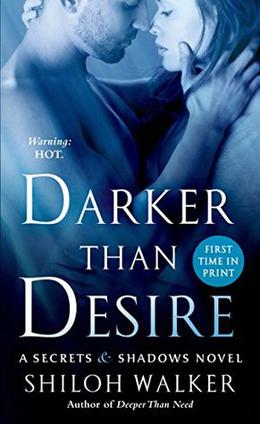 Trigger Warning: This book may be disturbing to some readers as it deals with child sexual abuse.

Sponsored links
Darker Than Desire is the story of David Sutter and how he comes out of hiding to confront his childhood demons and claim his place as an adult member of his small town. For the last twenty years, since his mid-teens, David has been living in a small offshoot Amish community under the assumed name of Caine Yoder. David lived as a carpenter under the protection of Abraham, one of the elders. The story opens with Abraham’s funeral and Caine’s agonized and mournful fucking of Sybil against a wooden fence. Sybil, an ‘English’ woman from town, the only woman Caine has ever had, is the only woman who can touch his tormented, tortured soul. Sybil is the woman who drives him mad with his need for her and in needing her, he must push her away to keep from tainting her with his filthy past.

The writing in this book is strong. The subject matter, as the initial chapters peel away, is the story of a depraved child-abuse ring that preyed on pre-pubescent boys of the town and was run by David’s own father. The action dips between decades old memories and the beginning of the present day police investigation to bring down the men responsible for the ring known as CRONUS. This is a very graphic, painful subject matter - an unusual choice for a ‘romance novel’, but it is revealed through flashbacks, dreams, snippets of conversation, and insights into the police investigation. While David provides most of the information, Walker deftly feeds the reader pieces of the puzzle through various conversations and events.

The characters are fleshed out sensitively and with personality. Everyone we meet has a backstory that is eventually filled out by the end of the novel. Characters sometimes have hidden strings that tie them to other characters, and there always seem to be mysterious benevolent forces working to rid the town of the scum that terrorized the young boys. I don’t wish to give too much away because this book is interesting, relevant and will keep you guessing until the very end. There are murders that happen throughout the narrative, and one can’t help but think that this book would make an excellent T.V. movie of the week.

The character of Sybil is a formidable one. She is strong, a fighter and a no nonsense kind of young woman. Her sister is an addict and she has taken over raising her young nephew while fending off her sister’s desperate and manipulative attempts to get money and booze off of her. Sybil makes no bones about her social status, calling herself ‘the town trash’, but she is a woman with a heart of gold. Sybil has wisdom and strength beyond her years and she fully understands what she is to David. She willingly gives her body and soul to him silently understanding his need to release his demons and cleanse himself through sex. Sybil also has a magnificent scene where she chastises the town gossip and puts the woman in her place for spreading innuendo about the boys (now men) who were abused. It’s a triumphant speech and reinforces the value and courage of adults who come forward to report past abuse.

There is also a very touching scene when another man who was also a victim of CRONUS tells David that he is ready to finally go to the police, and David volunteers to go with him. The solidarity of the pain and destruction caused by years of suffering is made evident through the words, conversations and small gestures of respect they show each other. Shiloh Walker uses the chapters to show some of the coping mechanisms the different men use to survive and exist and she contrasts that with the attempts of some of the child survivors to renew the membership in CRONUS. Cycles of abuse indeed.

The sex scenes between David and Sybil are extremely powerful in a wrenching and sometimes disturbing kind of way. The whole-hearted physical surrender of herself to David is Sybil’s gift of healing that she gives him. Her love for him is unconditional and she has harboured hope for them as a couple for years. David seeks her blindly at first, knowing he can lose himself in her curves and the feeling of control when he makes her ‘come apart’ through orgasming and saying his name. He eventually tries to distance himself from her, hoping to spare her the tarnish that he is sure will follow when the town learns the extent and truth of what he survived (through the ongoing police investigation). But each time they are together, the pull is irresistible and the outcome explosive and cathartic.

The sex is at times rough and forceful, though there is never any doubt about consent. There is an anal sex scene where David expresses the desire to ‘break’ Sybil, just for him, echoing in a way the words used on him as a boy victim - he was to be ‘broken’. David is able to find his release with the rear entry only as Sybil bites his wrist forcefully enough to leave marks - perhaps his legacy of a painful introduction to sex. As the story progresses and David faces more and more of his demons and begins to understand that Sybil will never turn away from him, he begins to experience his orgasms without the need for pain, and in this way, we are able to see his healing come to life.

Overall, this is a difficult read based on subject matter alone. I won’t lie, there were times it was tough - no one wants to think about children being harmed, let alone by respected members of their community or their own parents. However, there is a very good human story to be told and a wide cast of secondary characters with their own stories to tell that keep the book interesting. Throw in a murder mystery, some realistic dialogue and you’ve got a really good read.

This book rates a solid 4 out of 5 stars.