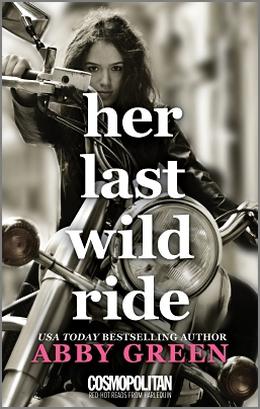 'Her Last Wild Ride' is the welcome latest addition to Harlequin author Abby Green’s romance collection. Dispensing with overwrought emotion and drawn-out melodrama, Abby Green has given us a succinct, sexy little novel that’s more smut than substance - and I love her for it. The novel is a small, well-written piece of erotica that still manages a surprising amount of heart, and all told, is an excellent way to spend a few afternoons. The premise of 'Her Last Wild Ride' is fairly simple; a gorgeous Irishman meets a beautiful bartender, they find themselves in close quarters, and would you look at that! They’re pantsless. What new magic is this?

Sponsored links
Ashling, our lovely leading lady, is a lady with a plan. Though she may be working in her brother’s bar for the time being, she’s starting a new company, and though she’s had her heart recently broken, she’s moving onward and upward (at least until Johnny makes an appearance.) That’s most of the character definition we’re given, admittedly, but by and large she seems like a smart, put together woman who has a definite plan.

Our delectable male lead is Johnny, the Irishman with the mysterious past. While Johnny isn’t the most fleshed-out male lead I’ve ever seen, he certainly knows what to do with the flesh he’s given,  and imagining his lines in a nice thick brogue helped considerably. Arriving in Ashling’s bar on the hunt for a long-lost baby sister, he quickly sets aside his mission in favor of hunting Ashling instead. It takes all of a couple paragraphs for the two to fall into a pit of mutual sexual frustration, and that’s when the fun begins.

That being said, I’ll admit that Ashling was a little frustrating to begin with, even though she did improve considerably as the story progressed. Any time a novel opens with a female character all but stepping out of the page to shake the reader by the shoulders and declare that she is so DONE with men, because it’s time to focus on HERSELF and she is definitely NEVER letting a man get into her head or her pants EVER AGAIN, it’s a challenge not to sigh deeply and murmur, “oh, honey.” I’ve never been much for plots relying on this idea that a woman just needs a swift inoculation of Hot Dude to cure her life issues, and so when Ashling opens by repeatedly asserting that she’s not going to let any man distract her from her budding career, I was a trifle concerned. Johnny’s emotions also feel a little tacked-on, as though the author finished and realized she’d essentially written an unbelievably buff and orally gifted sex doll (Quick! To the cabinet of depressing backstory!), but he’s definitely got sex appeal down pat. I imagine that the secondary plot concerning his long-lost family would (or will?) make for a much more satisfying character. Thankfully, as the book was predominantly toe-to-toe mattress tango, and all minor blot quibbles have been forgiven.

I don’t mean to imply that the novel is entirely devoid of feelings - it’s just that they’re dispatched as quickly as they arrive, and they’re very much secondary to watching our two leads find new and exciting ways to insert themselves into one another. While the prose was admittedly exposition-heavy, relying on somewhat clumsy asides to advance the plot, it was forgivable both for brevity and sex content. (You know the drill: “while so-and-so was my best friend and I told her everything, even she couldn’t really guess how much my TRAGIC PAST had really affected me, because I knew my heart would never heal again, she thought, as she poured a cup of tea before initiating a conversation that would explain where she lived and what she did for a living, even though they’ve known each other for years.”) Still, for all of that being said - Johnny and Ashling’s emotional shortcomings, the expository dialogue, whatever, it all paled in comparison to the excellent, extensive and delectable sex.

Oh my stars and garters, dear reader, the SEX. I loved it. It was everything I could have asked for, and I could shake Green’s hand for doing away with niceties and getting straight down to business. Our two leads jook up almost immediately, and they more or less don’t stop. The scenes are all exceptionally well-written, jumping perspectives seamlessly and getting dirty without veering into gross. (If you’re wondering, by the way, there is a threshold for “gross,” and that line begins and ends with balls. I love men, especially naked ones, but you cannot make protracted descriptions of testes sexy. It is impossible, and I advise you not to try.) Even better, the sex tends to wander, as all good sex should; not only do our delightful leads switch positions, they manage a startling assortment of styles in only two hundred  pages. Ashling and Johnny manage to have: Sex in a bar! Sex on a couch! Sex on a bed! Voyeur sex, impulse sex, kinky sex, breakup sex, makeup sex. It’s reminiscent of a Dr. Seuss classic - “Oh, The Places You Will Bone.”

(I refuse to feel bad about that joke, by the way: Dr Seuss drew tons of smut before writing children’s books. Look it up.)

All in all, despite some flaws, Her Last Wild Ride was a lovely little piece of erotica. If you’re looking for something to evoke soaring fantasies of unstoppable romance, you might want to pass this one up. If you’re looking for well-written, panty-bunching, “whoops I have to go take care of something right quick” lady-porn, this is the ticket, and I recommend it heartily.