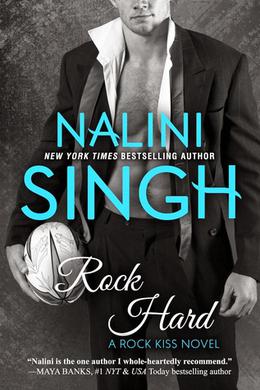 In 'Rock Hard' we meet Charlotte, a smart but timid young lady haunted by her past and rugby-star-turned-brilliant-businessman Gabriel. They meet when Gabriel is installed as the new CEO in the company Charlotte is working for. A chance encounter late at night leaves our hero first intrigued and soon infatuated with the heroine. The book is the story of Gabriel slowly seducing Charlotte.

Sponsored links
Let me start by saying that Nalinih Singh is one of my favourite romance book writers. Both of her two paranormal series' - 'Guild Hunter' and 'Psy Changeling' - feature some of my annual re-read musts, which also explains why her books just keep popping up in our Best of Lists… I was really keen getting my hands on her latest release 'Rock Hard' is what I am saying here and had high expectations.

I was expecting high stakes, roller coaster action and spell binding world building and got… something entirely different. But also something really lovely. In terms of story, not much is actually happening although there is a bit of suspense late in the book. Instead 'Rock Hard' focuses on the developing relationship between the two protagonists. And there is much to explore. Deeply traumatised by a previous relationship, Charlotte is too scared to even talk to Gabriel at the beginning of the book. He, on the other hand, is a force of nature and once he decides that Charlotte is the one for him he starts pursuing her - even though she only becomes aware of the fact after a while. Throughout the different stages in their relationship, from colleagues to friends to finally tentative lovers, the reader is following them as they try to figure out how to deal with the emotional scars stemming from Charlotte's past.

This is a sweetly romantic story which overarching tenderness has much to do with how Ms Singh has written the male protagonist. From the outside, Gabriel is the traditional alpha hero. First a star athlete, now a boardroom predator, he has no problem crushing his opponents. He is the physically and mentally imposing T-Rex to Charlotte's petit and timid mouse. Gabriel is a man who knows what he wants and how to get it. So far, so good, so romance book-y usual. And I am not going to lie, this trope really works for me.
What makes this book so special however, is that the author makes an important adjustment to the proto alpha male behaviour: Early on and as soon as he realises that there is something wrong with how Charlotte reacts to him, Gabriel understands that it is him who must make adjustments to his usual modus operandi to make their relationship work. Being used to alpha heroes who mostly ride roughshod over the heroine's feelings and agency, at least at first, this was a very welcome change. And it made for an incredibly sympathetic hero who was patient, loving and just full of heart throughout the whole book.

Charlotte, too, is a great heroine. Even at her most shy there are enough sparks for her to remain an interesting and likeable heroine - she never even comes close to doormat territory. As they figure out their relationship, she retains her smarts and sense of self. So even though Gabriel is the driving force behind their relationship, she certainly is not taking the back seat.

Let's talk about explicit consent for a bit. Not just in this book where it arguably makes special sense due to the subject matter, but in many of her other novels as well, Ms Singh writes her sex scenes with a focus on explicitly establishing consent between the partners. And I think that this is a fantastic contribution to current attempts to normalise this practise so that it becomes standard behaviour. One of the major arguments I hear against making sure that explicit verbal agreement is given prior to sexual activity, and this comes from women as well as men, is that it is just not sexy to talk about it outright and that it kills the mood and takes away the sensuality of the act. Reading Ms Singh's fantastically erotic scenes it becomes clear however that this is just wrong. So I salute her for showing her readers that it can be done, and that establishing explicit and verbal consent can be sexy as hell to boot.

Let me finish by saying that I recommend 'Rock Hard' whole-heartedly. 'Rock Hard' is a classic, almost old-fashioned (in the best sense of the meaning) romance story and I absolutely fell in love with it. Both characters are immensely likeable and it was heart-warming to witness them coming together as a couple. There is some dark subject matter, but also enough humour and flirtation to keep the book a fun read. But most of all, there was just so much heart! I know that this is most likely going to be stand-alone novel, but I would love to meet Charlotte and Gabriel again in a follow-up story.