Sins of a Duke (Scandalous House of Calydon, #3) by Stacy Reid 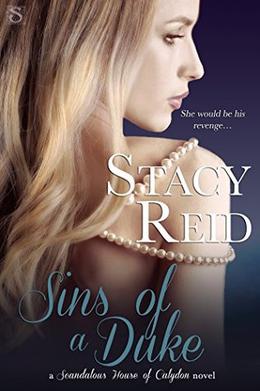 Our novel opens with Lady Constance Thornton having just had her bastardy revealed to society at large by unseen nefarious forces. While she is devastated and bears the outward burden of her family’s shame, her beauty is such that she has a titled man offering for her hand in marriage despite the scandal. However, once she sets eyes on the gorgeous and dark Lucan Devlin Wynwood, Duke of Mondvale, she cannot accept the much hoped for match that could save her reputation. Though Lucan is everything she should never want, she just can’t help herself.

Sponsored links
Lucan Wynwood is the legitimate heir to a vast fortune and the title of Duke. Though he has grown up in poverty with his sister after the death of his parents (his mother was disinherited for marrying his father) and is well acquainted with the hardships of the world, Lucan pulled himself up from nothing to become a self made man long before he had society thrust upon him. Now his only use for the frippery and hypocrisy of the ‘ton’ is to use it to find satisfaction in wreaking havoc and revenge on the men who hurt his beloved sister and led her astray to the point that she committed suicide.

Lucan has discovered that Lady Constance’s brother had long ago been his married sister’s lover and had refused to help her escape her abusive husband, a crime Lucan intends to reward through the utter destruction of Lady Constance. A sister for a sister is what Lucan vows. We soon discover that he nefarious forces at work behind Lady Constance’s ruin can be summed up in one man: Lucan. Lady Constance, at this point wholly and acutely aware of her undesirability in society, and knowing she has nothing to lose now that she has refused her one and only offer, decides to give in to the temptation that has been eating at her and throws herself in the path of Lucan to let fate take it’s course.

This is where the novel really takes off: the sexual attraction is hot and the contrast between the seasoned rake and the complete innocent is fabulously written. Lucan tries to shock Constance and scare her off with his blunt sexual language (did they really say “fuck” in those days?), but Lady Constance does herself proud by challenging his boorish behaviour and demanding to be treated for the intelligent, though young, woman that she is. And so, alone in the greenhouse, they end up lost in each others embraces and more. Action steamy enough that Lucan forgets himself, and in doing, providing excellent wank material for all concerned.

The next bit of action involves the requisite attempts by her family to marry Lady Constance off to a man of enough societal importance that such a match would save her reputation. I was struck by just how circumscribed the choices of a ‘Lady of Quality’s’ life was even in the highest of social classes. A woman’s options were to marry or be at the mercy of her male relatives for her support and keep. Lady Constance of course fights these attempts, and eventually convinces her brothers and parents to let her be - she would rather be alone than marry for convenience. Her menfolk are surprisingly supportive of her personal wishes, which strikes me as somewhat odd, given that the family’s reputation would have held sway on such a decision versus her personal choice. Perhaps because her family is as rich as Croesus and they dote on her, that the author decided to let Constance have her way and remain single.

In the mean time, Lucan’s plan to ruin Constance (further than her public bastardy already has?) by compromising her sexually and publically and then refusing to marry her was painful to read. At this point, we have been made privy to Lucan’s humanity and to Constance’s sorrow, and we are rooting for the happy ending we so desperately want. Lucan’s contrived courtship of Constance has given them many opportunities to touch, kiss, suck and so on, and the interactions are deliciously frequent and electric. Lucan begins to capture her heart and Constance, with a maturity that belies her years, can see that he is a basically good man driven by a mystery she can not identify, nor understand. So she resolves to simply treat him with honest emotions and her awakening desires.

Despite Lucan’s ever growing unease and questioning of his need for revenge, he goes ahead and executes his plans, but stops short of the public sexual humiliation he has planned for Constance. The extremely intense ravishment of her (some nudity and 3rd base action that leaves her wondering if she is still a virgin!) during one of the Social Season’s largest balls has her panting and speechless, during which time he simply dumps her cold (for lack of a better expression). Constance is heartbreakingly brought to her knees - because not only has society dumped her, but now the man she realises she loves has done the dirty on her too.

We are left devastated: this is not the usual course of a romance novel. Somehow the hero always finds his humanity before doing truly debasing and dastardly things, and Lucan is given plenty of opportunities to halt his battle plans. But Lucan sinks...to the very, very bottom. That said, the credit for all of our emotional upheaval goes to Stacy Reid, who shows herself to be a solid writer. She weaves a complex story of romance and societal history with timeless themes of love and loyalty. Of course Lucan eventually redeems himself, but only through real selflessness and a realization that revenge poisons all of those it touches. And Constance, despite her sexual innocence, displays a fortitude of character that is noble and so teaches Lucan the redemptive qualities of hope and forgiveness.

Stacy Reid does a marvelous job of contrasting high society’s hypocrisy of the tolerance of scandalous behaviours as long as they are carried out by men or by the wealthy in private clubs. She also skillfully highlights the vulnerability of a female’s position in society when touched by said scandals in comparison to a male’s almost boost-in-public-estimation when implicated in the same behaviours. Overall an interesting, sexy read.