The Warlord's Wife (Sons of the North #1) by Sandra Lake 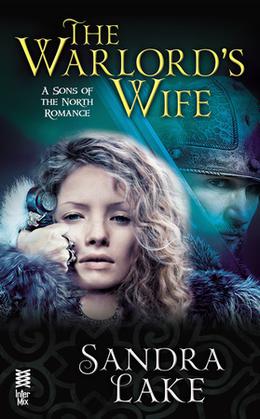 What starts out as a story with some very one-dimensional characters and situations, thankfully blossoms with some very real and very emotionally complex people whom we get to know and even like. However, to get to the good parts, you have to get through the somewhat stilted beginning, which, if you do, you will be pleasantly rewarded with some interesting and action packed political machinations.

Sponsored links
We meet Lida, the wife of Urhu, the recently dead Prince of Somewhere of Minor Importance who has taken her to live in his familial seat across the water from her family’s home. Lida is very young and though she married for love, we learn she had surrendered her innocence to her now-husband before their wedding and is pregnant...visibly pregnant. Which, apparently is a HUGE problem if you live in medieval times and your husband is killed only a couple or three months after your wedding.

The action opens with Lida’s mother-in-law beating the feathers out of her while announcing before the assembled court that she is a whore who tricked her son into marriage (even though he was the one who took her innocence and impregnated her before that all-important wedlock).
It’s a controversial subject, but one that Sandra Lake takes head-on, unknowingly or not - a perhaps not very commonly known fact that the most dangerous time in any woman’s life is when she is pregnant. That is the time a woman is more likely to be the victim of violence than any other time in her life. Ms. Lake revisits this concept more than once, and though I don’t want to give too much of the plot away, the point rings true regardless of a woman’s social stature.

It’s now eight years later and Lida is once again in the bosom of her family with a beautiful blond daughter in tow. She happily works the family’s farm and is content with her fate. Enter the travelling Jarl, Magnus Knutson who has gotten it into his head that it is time to wed and bring a bride to his steel fortress. And can you just guess who catches his eye? The lovely mud-covered Lida, sweating away in the fields! After inquiries are made toward her character and reputation, his steward makes an offer for her hand and after a bit of hemming and hawing from her brothers, Lida is betrothed.

That Lida is given some choice in the matter is highly unlikely and unusual considering what an advantageous match this would be for her family. Add to that the unrealistic way Lida bargains directly with the Jarl for rights to be accorded to her daughter as a condition of marriage, and you have modern women’s rights swimming about in Northern medieval history...something of a wishful thinking type of addition. I suppose it must be a real struggle for a writer to decide whether to stick to the strict social mores of the times they are writing about, or to consider who their present audience is and what influence they may wish to exert on today’s readers.

I will say that Ms. Lake hits the mark in more ways than one by revealing the precariousness of a woman’s position in society and just how defenseless and at the mercy of men they really were in most, if not all situations. Women in those days had to rely on the kindness and favours of men regardless of their ages and status. There is a fantastic conversation between the Jarl and Lida over the subject of forcing her daughter to braid her hair as was the custom when they arrive at his fortress. Lida silences his queries by defending her decision to not force the issue, saying “She will never be in command of her own person. She will go from her family’s house to her husband’s house or to a house of God. She will never be without an owner to command her about and demand her submission.” So, really, why not let a girl child have control over her own hairstyle if that’s the most autonomy she’ll likely have? Game, set and match: Lida.

From the start, Lida is a constant pit of despair and worry, despite the fantastic sex she and the Jarl have from the initial night of their union. The sex is electric and full-on from the get go. Sex is the introduction, conversation and connection between the two literal strangers. It begins to form a bond between them as soon as Lida starts to shed her guilt for loving the touch of this man. It takes until she is a few months into her marriage before we see a softer, more loving side of Lida, one that lets her humanity shine through. Lida is in fact, a smart, sensible, sensuous woman who has found herself wed to a man she barely knows, yet has come to respect and eventually, to love.

Magnus also goes through his own metamorphosis. From staid ruler who sees Lida as his possession to fuck and clothe and direct, he is a man who knows not what to do with a woman with an opinion or how to interact with a child. Soon we see him grow and learn and observe and ask advice in order to enfold the two females who now make up his family into his otherwise orderly life. It is an impressive change, and turns him from a one dimensional caricature into a full blown red-blooded, three-dimensional man we’d all like to have swinging his broadsword for.

Overall, this book starts slow but eventually heats up to a steady simmer by the end, and there is plenty of sex to be had throughout the chapters - enough to keep you sighing for fur-covered beds flickering fireplaces and snow covered lands. I’m purposefully not going to outline the political and inner household intrigues because I don’t want to ruin the twists and turns for the reader, but if you liked Game of Thrones, this is a simpler and easier to follow version. A good read for a wintry day or a quiet afternoon.