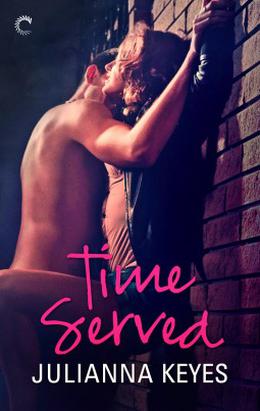 Time Served by Julianna Keyes is the rich and compelling story of twenty-eight year-old Rachel Moser’s soulful redemption. A skillful and intelligently written novel with an involved storyline and multi-faceted characters, this book is not to be missed. Ms. Keyes compliments her readers by delivering an emotionally complex back-story for her main characters as well as creating full and multi-layered worlds in which they reside and function together and independently as friends, colleagues and lovers.

Sponsored links
The novel is told from the viewpoint of Rachel, an up and coming fourth-year associate lawyer working for a high-profile firm in a large American city. Rachel is busy investigating some very serious and heart wrenching chemical poisoning claims in the inner city. The Rachel we meet is the epitome of success: smart, ambitious and hard working, all in a fabulous Stella McCartney suit and heels. Her heart bleeds for the sick and damaged people she encounters through her work, and at first it’s hard to make sense of her rigid, uncompromising drive and quest for success, that is, until we meet Dean.

Dean is the tall, dark and angry ex-con from her past who crosses her path by chance and instantly drags her mind kicking and screaming back to the trailer park she ran away from as a teen. The past that she thought she had buried forever, along with her poor and trashy mother, comes back to jeopardize her present (and she fears), her future, in the form of this man. This man: Dean, an ex-con warehouse worker and sometime ring-fighter who still retains the ability to leave her breathless and panting, who stirs her body like no other - this man who has decided to take his pain and pleasure out on her to “fuck her out of his head’ as it were. This man who still hates her for leaving him in the middle of the night, never to return.

Encountering Dean, whom Rachel had prayed to never see again, launches her into a maelstrom of emotions, regrets and second-guessing her decision to run away from her life in search of bigger dreams through education and work. Ms. Keyes is a master at subtly creating tension by contrasting the many different worlds in her book - the poverty of the trailer park with the wealth of the legal firms trappings; the families of the inner city compared with the sterility of the high rise apartment Rachel inhabits alone; the resolution and acceptance Dean has with his circumstance versus the constant convincing Rachel does to maintain her facade of happiness with her lonely work-oriented life.

This is a modern, in-depth story with big ideas and deep swirling emotions and no neat solutions or endings for any of the characters. There is bad, and better and worse and not so bad, but nothing is perfect for any of the characters. Life is reflected quite successfully in a myriad of ways in this book. Everything from the various ways sex can be used to communicate emotion (and more, much more about that later) to the workplace stress that can be caused by a power-hungry colleague who still ends up getting what they want even when it’s not fair according to the rules of the universe. Those are the events of real life. The frustrations and small victories that make efforts worthwhile. Do know that I thought long and hard about using the word redemption to describe this book, but that is an accurate description of what evolves for both Rachel and Dean.

And now for the sexy parts!

Ms. Keyes positively glows as the creator of the regularly interspersed, yet at times unexpected sex that is constantly evolving and regressing the relationship between Rachel and Dean. Ms. Keyes has created a series of astonishingly satisfying sexual encounters that don’t always begin, end or result in the traditional happy orgasms we’ve come to expect as readers of romance and smut. Instead, Rachel and Dean communicate, argue, console, repent and grow through each of their highly sexual interactions. Dean uses his body and size to lead Rachel into revealing her body and soul’s needs and wants. Jealousy, desire and devotion are skirted and sometimes faced head on, and sometimes ignored. The sex, much of which I do not want to describe and thus give away, (because it is THAT good), rides the lines of domination, but in the best of possible ways.

Rarely have I come across an author who portrays the role of sex as it is exists in real life human relationships (albeit slightly less intensely for most). Sex as a connector of two people, sex as an expression of love, caring, anger, hatred, punishment, jealousy - Ms. Keyes understands that sex is not all butterflies and rainbows and unicorns as many authors would have you believe. Sex can be ugly, hateful and emotionally painful - and this is grown up sex. The scene where Dean leaves Rachel in her bed made me cry because they were so obviously not finished with each other, yet the end of the line had come for him, and so he leaves...after making love to her so sweetly and reverently despite her not being emotionally ready for his love.

The only criticism I have with this novel has nothing to do with the plot, characters or sex depicted. It really has to do with Rachel’s choice of footwear for the important party her Law firm throws atop one of Chicago’s ritziest highrises. I was absolutely outraged that Rachel would choose white stilettos to wear with her fitted red dress and black dangling earrings. Everyone knows that nude heels are the only footwear option for a red dress!

The bottom line is that with Time Served, you get the real deal: excellent inner dialogue, a realistically treated contrast of worlds, hopes, goals and lives lived, and even the epilogue rings true. We fast forward eight months and find Dean and Rachel have not married and are not expecting the requisite epilogue child. Ever realistic, Ms. Keyes has them finalizing their living arrangement while each has slowly and carefully made some concessions to the other in order to respect and increase their chances of success as a couple. A satisfying conclusion if ever there was one.