The Salvation of Vengeance (Wanted Men #2) by Nancy Haviland 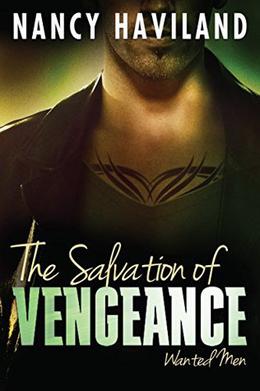 The Russian Mafia. The Italian Mafia. A Biker Gang. A psycho-sadistic killer. A New York Cop. A Catholic Priest. A sister lost to drugs and prostitution. A wedding. Another sister trying to save her brother. A damning piece of video saved on a missing USB stick. Plenty of murders. Lots of violence. A pregnant best friend. And plenty of good, hot, droolingly sexy romance and sex. Nancy Haviland has skillfully spun each of these rather odd elements into the very interesting second novel of her “Wanted Men” series. Readers should have no fears if they haven’t read the first installment, because Ms. Haviland gives nothing away that would ruin the plot for you if you decided to go in search of the first book, and after reading this tome, you may very well search it out for more exciting tales.

Sponsored links
This story starts with a bang - a literal bang as we encounter Nika Paynne being beaten to within an inch of her life by her husband Kevin Nollan. The scene is disgusting, as it is meant to affect us viscerally and bring Nika’s living conditions into sharp focus. It doesn’t take long for the reader to understand why Nika - an intelligent, proud and capable woman, has found herself living in a nightmare no woman would wish upon her worst enemy. Nika has been blackmailed into marrying her abuser because he holds the key to her Biker brother’s freedom - video footage on a USB stick that would have him put in prison for life. Nika has convinced herself that she is the only one who can save her brother - by enduring life with this man until she can locate said evidence and leave Kevin forever.

I have to admit that this line of logic took a long while to swallow as being plausible - almost to the end of the book. Mainly because the entire plot rests on the premise that only Nika can save her brother. When you start to look at the cast of characters, you realize that Nika has taken on more than she can handle. Especially when you find out that her brother is one of the leaders of a Hell’s Angels type gang, I mean, wouldn’t you just rat out the Nollan dude and have him ‘taken care of’ by your brother and his gang? Then the threat of jail for the brother would disappear in an instant and she could stop being a human punching bag.

Ms. Haviland, while enraging us with Nika’s helplessness, draws an interesting lesson when we find out that on top of her brother having Biker ties, we learn that her best friend is the daughter of the head of one of New York’s most powerful Russian Mob families and her bestie’s new husband is the recently crowned head of one of the most powerful Italian Mafia crime families. That Nika has access to an arsenal of the most well armed, cold-blooded killers who would do anything to protect their friend and sister, they all appear quietly stumped at her odd bruises and quietly stymied by her strange reluctance to get-together. So, despite being surrounded by potential saviours, Nika is left to languish in her personal Hades, because it is easier for the people around her to tacitly ignore what is so obviously staring them in the face.

This is a very salient and on-point message Ms. Haviland makes about domestic abuse. Everyone who encounters it seems to have a sense that something is amiss, yet no one dares face their suspicions head on, let alone ask Nika about their concerns directly. ‘She’s a grown woman...she chooses to stay..maybe we just don’t understand him the way she does..’ I’m paraphrasing, but you get the idea. I spent much of the book screaming in my mind for her to tell someone, or for someone to have the courage to force the issue and save her from the psychopath that is her husband.

Nika also begins to realize that her abuser may have permanently damaged her ability to be able to accept another man’s touch. That is, until she crosses the path of one Vincente Romani, Underboss of the Italian crime family her best friend has married into. A chance encounter with Vincente has her reeling from his touch and his kiss. Vincente immediately senses her fear and that something is badly amiss with this beauty who has captivated him with her fiery red hair and emerald green eyes. Their sexual encounters are ones of forbidden love - emotionally charged and electric and blissful and soul satisfying in the end. Vincente is something of a tortured hero, who fights against loving Nika because he feels he will ultimately fail her as he failed his sister in her teens. And though he doesn’t save Nika from her husband, he learns to love her in the end.

Overall this is a solid book. I’m even planning to find the first book to learn more about the previous action! The action is consistent and moves quickly. The cast of characters are well written and colourful and the dialogue is tight. I initially had some misgivings about glamorizing Mafiosos as love interests, considering the real life horror and havoc they wreak on the world around them, but I noted that Ms. Haviland is very careful to mention that Vincente, while violent, seems to only kill those who abuse and kill others, while earning his ill-gotten coin from the more ‘victimless’ crimes of gambling and money laundering.

While the violence in this story is very graphic and bloody and painful to read, the message is clear and important: domestic violence is everyone’s problem and we all need to be a part of the solution.