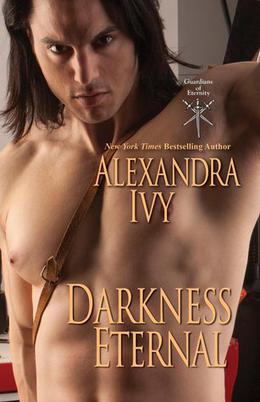 When the shatteringly handsome but appropriately tortured vampire Uriel is assigned to rescue a magically trapped gypsy from her evil vampire twin sister, he’s a touch cranky - and not just because his life sounds like fantasy novel word salad. Despite his angelic good looks, he’d rather be out murdering things than playing white knight. Uriel is a predator, after all, no matter how housebroken he may seem to be. So when he shows up planning to just grab the dame and book it for home, he’s unpleasantly surprised to find that she’s feisty, unimpressed with his efforts, and moments from being sucked through the literal gates of hell.

Sponsored links
Vampires, magic, gypsies, blood & guts, boners & correspondingly excited lady-parts - truly, Alexandra Ivy’s Darkness Eternal has it all, if fantasy romance is your thing. Personally, I love it; without being rude, the genre really hides all manner of sins. Things that would genuinely irritate me in almost any other novel - instalove, deus ex machina endings, characters with only one real defining trait - are suddenly completely forgivable. Of course they fell in love immediately! It’s, like, a vampire thing. Fangs, love of blood, the evolutionary drive to fall obsessively in love with specific people on sight... You know, vampires! It’s just how they roll. Just like how fairies are all horndogs and demons are way nicer than they get credit for, but in like a sarcastic punk rock sorta way. And the ending isn’t haphazard because the totally evil hellspawn turned out to have good intentions all along and also the very specific powers needed to undo all of the protagonist’s problems - it’s called magic, guys. They don’t call it “normal boring universe rules” for a reason.

All kidding aside, fantasy romance is just a nice excuse to turn off your higher-level thinking and go along for the ride. Darkness Eternal, despite clocking in at just over 100 pages, is a hell of a ride. (Get it? Hell of a ride? I am SO PUNNY, YOU GUYS.) Our protagonists, Kata and Uriel, are sucked to the underworld almost immediately, and we spend the bulk of the story watching them battle their way out - with appropriate pauses for sexy times, of course. Uriel, as we’ve said, is a vampire; a very old, very powerful vampire, who is nursing a grudge and a secret, as all vampires ought. Kata, on the other hand, is human, a gypsy who has been imprisoned (and thus kept young) by a powerful spell for centuries to protect her only child. Despite the species gap, the two quickly fall in love and, despite being in actual hell, hanky-panky ensues. Then there’s violence, and declarations of undying affection, yadda yadda, satisfying conclusion.

Despite being short and bare-bones, the characters are more fleshed out than one might expect. You don’t get to know them for long, but you like them. Kata, particularly, is a fun, feisty little lady. She’s no match for Uriel’s aptitude for violence, but she gets her time to shine, and doesn’t have any handkerchief-waving “save me, Popeye!” moments. By keeping everyone’s motivations fairly simple (Uriel loves Kata, Kata loves Uriel, and she’s going to save her daughter come hell or high water) Ivy actually made space for her protagonists to feel a little more like real people and less like archetypes. As a result, their insta-love is a little more believable, and the sex is fan-f*ing-tastic. Romance novel heroines are no strangers to sexual frustration, but I can’t think of many who haven’t managed to get a good bunch in their britches for about 200 years. That has got to be a relief!

The plot itself is brisk, quick and action heavy. Lots of excitement and violence with a quick resolution. It’s more like a sex and violence-heavy TV episode than anything else, which is nice! It’s a quick and fun way to burn through an afternoon or two. Contributing to the TV episode sensation is that this is an installment in a much longer line of novels, and to a certain extent, it shows; there’s a lot that is clearly going to be resolved down the line, although it won’t keep you from enjoying this as a quick standalone trip if you’d rather. I’m intrigued to see what Ivy will do with these characters in the future, because it seems as if they have more adventures ahead!

Overall, Darkness Eternal is a fun, sexy installment to the series. It’s got plenty of blood and guts and violence, sex and sexy people, and a nice dose of pathos to tie it all together. For a fun way to burn through and afternoon or two, look no further - or, to keep yourself occupied considerably longer, go back and start the series from book one!