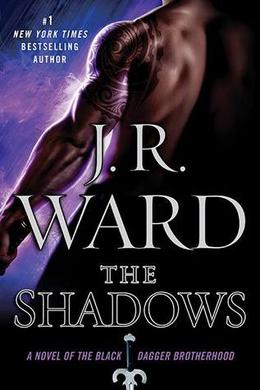 J.R. Ward’s The Shadows is the 13th installment to her Black Dagger Brotherhood series--an excellent, well-written addition that I found incredibly compelling for a number of reasons. It has, however, generated a small amount of controversy--which we’ve decided to deal with over in our article section (SPOILERS!) so as to give the novel itself a fair shot. Because, my goodness, does it deserve a fair shot!

Sponsored links
The Black Dagger Brotherhood series covers an enormous, sweeping ensemble cast of characters from all different “species” in Ward’s universe: vampires, Lessers, Shadows, all engaged in (often deadly) power struggles just beneath the surface of the human world. Of course, as is common in these large-cast stories, each pair of characters gets a novel where they step to the foreground, even as the larger story moves forward around them. The Shadows deals specifically with the two twin Shadow brothers, iAm and Trez: one cursed by fate, the other consumed by the task of being, truly, his brother’s keeper.

From birth, Trez has been destined to be the male concubine for the heir to his people’s throne. The s’Hisbe, a matriarchal society, decree succession by an ancient and complex system of astrological charts. Kept for his entire life in a gilded cage, no less a prisoner for all his preening and luxury, Trez is driven almost mad by the suffocating reality of his servitude--and the consequences when he steps out of line are immediate, violent, and fall entirely on the head of the only person he loves. iAm, despite not being chosen by the stars as a glorified stud mare, is the palace’s best means of keeping his brother under control. For centuries, the two suffer, one kept captive with guilt, the other tortured to keep that guilt fresh. Until, finally, they escape. Finding refuge with a brotherhood of vampires, the twin Shadows settle into an uneasy truce with the s’Hisbe palace, a departure tolerated only because it has an expiration date. Inevitably, they will be called home, to fulfill their destiny or face the consequences.

That’s just the setting of the stage, believe it or not. There is so much happening in this novel that I wouldn’t know where to begin when trying to describe it all. Doomed romance, the budding of a predestined love; royal power plays, forbidden assignations, and the threat of war, are all crammed into a fast-paced but thoroughly-planned plot. It’s a lot to experience in one book, but Ward’s writing is honestly impeccable. She grasps dialogue incredibly well, creating an odd blend of stilted old-world grammar and modern jargon that takes some acclimating to but overall, nicely conveys a world straddling archaic tradition and the pull of modern individualism. Her characters come across as larger than life without being caricatures, flawed but ultimately, and redeemingly, loved.

The sex, especially, is just--oy, ladies, the sex is just great. I’ve never been in a state of vague semi-arousal for so much of a novel. While Ward doesn’t hesitate to yo-yo from orgasms to tears (so don’t look here for straight-up wank material), there’s no “fucking” to be found here--just well-written lovemaking that makes it hard to put the book down when the real world interrupts. Whether it’s fun and silly sex, slow, sensual seduction, or a backseat quickie, the sex is fantastic and dirty and fun without being off-puttingly overt. I’ll admit to being slightly taken aback by Ward’s affection for guys coming all over their beloveds as a mark of affection, though: I mean, I sort of get it, but it gets a little odd the third or fourth time it happens. Possessive insta-love seems to be an inescapable part of vampire lit these days, but all the “marking” and “bonding” started to feel a little canine at points, if you catch my drift.

If I had one notable complaint, it’s that there is so much going on that Shadows could easily have been more than one book. Certain side plots are left untended, although I’m certain that some of those loose threads are simply the beginnings of yet more sequels to come. If you haven’t read the rest of the series, the central plotlines are concise enough that the book more or less stands alone, but I would probably recommend starting from book one rather than just diving in now. The Brotherhood, Trez, iAm, and their lady-loves are utterly compelling, and the side plots (a well-bred young lady itching for greater autonomy; a married couple coming to terms with their incredible luck in the face of someone else’s tragedy; an expectant mother terrified that she don’t get the chance to find her own happy ending, among others) are not only captivating, but provide reflections of a dizzying array of relationships to mirror the two that are most central to the story. Taken as a whole, Shadows is a heartfelt love letter to the world that Ward has created, from stirring sex scenes to raw emotion and a much-needed touch of humor; and, at its heart, is a story of all the ways we fall in love, and the ways that love can support us--or destroy us--when tragedy strikes.