Seduced by Sunday (The Weekday Brides #6) by Catherine Bybee 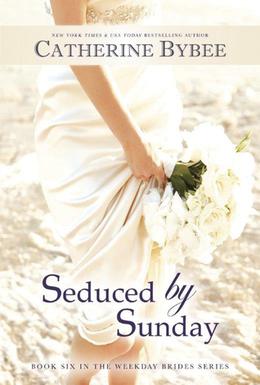 I wanted to like this book, but the action of the main plot and subplot is too choppy to be enjoyed if the reader is really paying attention and unfortunately, some of the themes that dominate this book are slightly out of date. Case in point: our heroine, Margaret Rosenthal, half Italian firebrand, half Jewish smart mouth - blonde and petite, works for a marriage-of-convenience agency to provide marriages between high-level men and cultured but cash poor women who want to emancipate themselves through a “beard for hire” situation. See what I mean? So many stereotypes...so little time...

Sponsored links
Our story picks up when Meg travels to a secluded uber-private island with her bestie’s movie star brother Michael to see if the island’s security and no camera policy really is as good as it says it is, which could be lucrative for her business interests. There she meets Valentino Masini, or Val, as he is referred to, who is described as being a dark, five o’clock shadow-hot latin lover with a flat rippling torso and nice shoulders. But, sadly, he seems to lose his authority and intelligence as soon as it appears his sister has been duped and taken ‘hostage’ by her fiance/husband (enter dominating sub-plot).

Valentino starts out as if he was going to be a super-rich Italian hunka hunka of Alpha male, but he kind of turns out to be a wet noodle - an Alphaghetti male, if you will pardon the Chef-Boy-R-Dee pun, beating himself up for not knowing his sister was in danger, but not really knowing how to snap into action.

The snapping into action is where Margaret, or Meg, steps in. She does all of the figuring out of the sub-plot mystery and she does all of the contacting of high-powered friends to come in and aid Val and save his sister. Meg is sassy all right, but the object of her sassiness is usually Val, the man she’s supposedly falling in love with, the man we are supposed to believe she is falling in love with. But, awkwardly, it doesn’t even seem as if she actually likes him until the last couple of chapters when her thoughts are explored a little more thoroughly. Until then, her dialogue towards him is always more of a ‘back-off bub’ type of interaction and something of an erection-killer if I may say so.

The book also hinted at some past heartbreak Meg experienced, but that never seems to get explained, so it seemed weird that she would flirt and be kind to every other man, just not the one with whom she had sex with. Odd, to say the least. I wondered if maybe that story element had occurred in one of the previous books in this series, as it seems that there are a number of couples that we meet in this book who probably have had their stories told earlier when Meg was just a secondary character to their love stories.
The secondary storyline of Val’s sister Gabi marrying a nefarious winemaker pretty much took over the entire book, with her quasi-kidnapping and subsequent two-week heroin addiction. In fact, when Val still finds time to sleep with Meg (Margaret) even after he sees photos of his drugged out sister being injected with drugs and nude in bed with a strange man, it kinda makes you think he’s a bit of a douche, rather than the hot passionate Alpha we want to see take charge and help Meg find the scum who is doing this to his beloved sister. So much for the family first Italian stereotype trotted out for the plotline.

As well, I have to add that the ‘mystery’ of who was behind the clandestinely taken blackmailing photos was easier to solve than the mystery in an episode of Scooby Doo (which is a lot more complex than this one was). It was so easy, in fact, that I only wanted to finish the book to find out that I was right. And I was!! Though I’m glad I did, as Val seemed to grow in boldness enough to follow his heart once his sister was safe and seek out Meg on her home turf and propose with some words about being ‘seduced on Sunday’ which seemed to wrap up the hook to this franchise. The sex in the book was mediocre. If it were more visceral, hotter, even if the build up to it was better, it would have improved the reader’s experience immensely. Most of the sex starts off as comforting and then evolves into some standard going at it.

The gay love story involving Michael (the movie star) really struck me as being out of date. I mean, Michael tried to hide his homosexuality for Hollywood, and the statement ‘Hollywood likes it’s stars to be heterosexual’ was used maybe half a dozen times. Now, not to brag or anything, but I am an avid reader of Hollywood gossip mags and websites and I can attest that this is a throwback issue, not one I’d expect to see in a contemporary romance, because Hollywood doesn’t seem to have a giant problem with leading men being gay. Perhaps if the story focused more on Michael fearing his small town Utah religious parents discovering his sexual orientation, well, that might have been a more appropriate backdrop for the storyline.

One theme that I thought was interesting and fresh in the book is that Meg has asthma and battles it at inopportune times throughout the book. This is a character trait that really brings Meg to life - we all know someone with asthma, and I will admit, I’ve learned a thing or two more about the condition as a result of reading this book. It also makes more sense once you get to the “About the Author section and read that the author used to be a nurse before turning to writing full time. The conclusion also includes a few words urging women who have read the book to please take their condition seriously and to get current medical advice about their medications and state of health in order to prevent hospitalization and even death from under-treated asthma and asthma attacks.

Ultimately, this is a book that tries hard even if it misses more than it hits the wall the target is on. Let’s say that it makes it about two-thirds of the way to the mark it aims to reach. Which is kind of okay, but also kind of disappointing, because the basic ingredients are there for this to be a very enjoyable romance in the classic sense. The locale is fantastic - the Florida Keys. A private island with a luxury resort so private that movie stars go there. Some hot and attractive people. A high-stakes hostage-y situation...but it just never finds the right balance. Too much nefarious drug-smuggling, and unfortunately, not enough romance and sex. I wish I could give this book a higher rating, but it just lacks the cohesiveness to warrant a score higher than a 2.5 out of 5 stars.