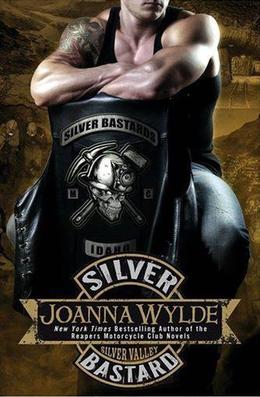 This book is good. Scratch that. It’s great. G-R-E-A-T. It was impossible to put down once I started reading, and in fact I didn’t put it down, I read it cover to cover, straight through making dinner, eating dinner, washing up and interacting with my family for the rest of the evening, something that I’ve never done with a romance novel before. And I absolutely would do it again in a flash when reading this Joanna Wylde book.

Sponsored links
Silver Bastard is a tightly written, rollercoaster of a hog ride through the eyes of two life-hardened young people. One is Puck, a twenty-something newly made member of the Silver Bastards Motorcycle Club, fresh out of prison and looking for life. The other is Becca, an even younger woman with a very sad and troubled past trying to make a life for herself and find her way in the world without letting her past mess it up.

Puck and Becca meet and have sex the first night he is out of prison. But it is not what you expect. In fact, the circumstances are exactly the opposite of what you’d hope they would be. Instead, that one traumatic, insanely hot and sad encounter connects the two of them in ways and means that follow them to the present.

It is now five years later and Puck, who hung back and hovered at the edge of Becca’s life to protect her from himself and others like him, is back in full force. In fact, he has moved in just across the street. Puck’s brooding, coal-hot gaze never seems to leave Becca as he encounters her and lusts for her from not-quite-afar. The chemistry between the two of them is bio-hazard hot and the underlying love that pins these two rag tag lovers together is real. Puck has been Becca’s silent protector all of these five years past, and for good reason, as we learn more and more about her troubled mother and stepfather.

Ms. Wylde does not like to shy away from the ugly things in life, and I should warn you, there are quite a few ugly things that happen in this book set in an unglamorous small town in Idaho. There are no Louboutins worn out to the clubs of New York and there are no private jets to fly off to dinner in. This is a story about a girl with fourteen bucks and change in her bank account and a guy who spent a year in prison - a guy who gets a blowjob from a stripper in his first hours as a free man. Their lives are gritty and real and hard for lack of a better word. They are ‘trash’ as Becca calls herself, but they are true to who they are and don’t try to be any different.

Instead of dwelling on their misery, Ms. Wylde focuses on the transformative effects that love, trust and acceptance of oneself can have on one’s outlook. This is what a superbly talented author does and Joanna Wylde is exactly that. She takes the ordinary and makes it extra-ordinary. Idaho becomes one of the sexiest places on earth because Becca and Puck are there. The diner, the beauty school, Becca’s shabby apartment all come alive because they are inhabited by fully fleshed out main and supporting characters that the reader comes to have strong feelings about, whether it’s to like or hate them.

We see that Becca and Puck have grown up in the culture of bikers and while they are not ashamed of it, they clearly have hard boundaries about what they consider right and wrong behavior. The amazing thing about romance-novel motorcycle-club guys is that there is usually some honor in their debauchery. Should every hot-blooded mildly anarchist motorcycle club member have to be a cold-blooded killer? Of course not, but they do have to have the POTENTIAL to be. Nothing stirs the blood more than the tightly wound sense of honor and desire to protect what is theirs, especially when it is a woman they love.

The Silver Bastards are not clean-nosed, and Puck owns up to Becca about this, but the Bastard’s kick ass where ass needs to be kicked and they look out for the interests of their small town. Their crimes are usually restricted to money and gun-running (a lot less miserable than the prostitution and drug crimes that other clubs are into). That Becca and Puck choose to live their lives within those parameters and have us rooting for them in the process is testament to Ms. Wylde’s skill at welcoming her readers into the intimate lives of her characters, regardless of the less savory aspects of their world.

Motorcycle clubs clearly conjure up a variety of images. There are the requisite leather jackets or vests (cuts), blue jeans and standard issue motorcycle boots. Then there are the bandanas and tattoos: acres and acres of tattoos on muscled arms. Then there are the men: muscular, young and hard bodied, if you ascribe to the Sons of Anarchy school of motorcycle babes, or the older, sun-weathered, wiser members of the clubs: the grandaddies who think out the strategy and know the territory and have paved the way for the young pups.

This book has them all and provides some fantasy candy for all tastes, because seriously, how different are the motorcycle gang members in this novel than your average Knight of the Realm? They both have codes of honor, hierarchies and (Old) Ladies that they will fight for. These bikers are simply our modern day version of men ON shining armour.

Silver Bastard is an amazingingly entertaining read. The dialogue is sharp, the sex indescribably hot (read it and see for yourself) and the action can be brutal at times. But the message remains timeless: love can conquer the demons of the past. Puck and Becca’s story will have you revving your motor in anticipation of the next installment of this new Silver Valley series. Get in line early though, as I predict book two will be a very hot commodity indeed.