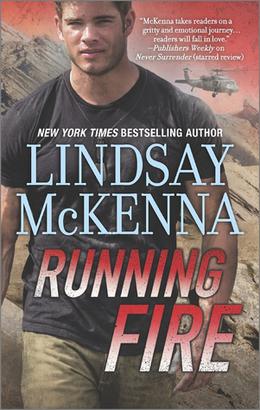 This was my first book by Lindsay McKenna. I knew little of the premise, described as “a steamy contemporary suspense.” Steamy, you say, I’m all over it. And there is a hunky man on the cover, I do enjoy that. The book starts with our heroine Leah Mackenzie, a helicopter pilot and warrant officer in the Army. Leah’s helo crashes in the desolation of Afghanistan and Kelly “Kell” Ballard - enlisted Navy SEAL - happens to see it and saves her from the rubble. Then together they struggle to make it back to the safety of the base where both Army and Navy are stationed without being spotted by Taliban forces or other dangers.

Sponsored links
Admittedly, I am not super familiar with the branches of the military and all of the lingo. And there is a lot of lingo and abbreviations in the book. It was hard for me to get through the first 5%. It took me several attempts and lots of look ups. Some of the abbreviations and terms are explained, some are not. I gave up looking them up and tried to understand contextually. Once I got further into reading, it started to flow a little better for me.

Kell carries Leah to safety, after he is shocked to discover she is a woman. Apparently “the Shadow Squadron is a men only combat slot.” He’s been in the field for at least several weeks doing recon on a HVT, a highly visible target. And because he is just so alpha he is living in a series of caves stocked with endless supplies of water and MRE’s. I guess the SEALs are that prepared, with several caves stocked to the brim and just waiting for an American soldier and his lady to be stuck there.

As it is in romancelandia, Kell notices her beauty as soon as they reach the cave even though Leah has suffered wounds to her arm and head, leaving her bloody and with a mild concussion. Conveniently, he is a trained Medic and cleans up her wounds and stitches her arm. She wakes up and is immediately entranced by his rugged good looks and feels safe with him. For her this is atypical because “most men scared her.” Leah does not trust men and has clearly suffered some sort of previous trauma. She’s awake, he gives her an overview of what happened in her helo crash and that he is a good guy and going to get her to safety. He makes a mental note that she must be married because, “someone as pretty as she was would definitely be married.” Kell also noticed that Leah has a “sinner’s mouth” and “wasn’t wearing make-up”. Wait, what? She’s a highly trained helicopter pilot that somehow made it on to a men’s only combat squadron and we are talking about her sinner’s mouth and not wearing make-up? At this point, I knew I was really going to struggle with this book. Plus I am still boggled how if pretty equals marriage, why am I still single?

We learn more about her trust issues: She was previously married to a horrible man who physically and emotionally abused her. I do not take domestic violence lightly. Survivors can have lifelong effects, but this plot point was brought up time and time again and began to feel like it was word space filler. She is distrusting of all men, but three days in a cave with a Kentucky drawled gentleman and all wounds have been healed. Leah is also inexperienced with sex and doesn't realize how it can be. Kell resolves that issue for her when he gives her her very first orgasm, after he kisses her twice. Maybe once with tongue. Seriously, that’s all it took. He kisses her twice and then she doesn’t even know what happened to her. She’s 29, she’s heard her friends talk about “orgasms” but never had one. There’s no mention of self pleasure either. Let’s talk about how an otherwise healthy woman, who seems to have experienced at least some sexual desire has never even explored her own body to the point of orgasm. It just didn't ring true to me.

The inexperience story line then culminates in this winning speech, “You weren’t stupid,” Kell said, his hand moving across her shoulder. “You didn’t have a mother to teach you a lot of things, Leah. And I’ll bet your father never talked about your menstrual cycle with you? Or when you needed to start wearing a bra? All those things moms talk to their daughters about?”. Leah’s response is something along the lines of my high school girlfriends took me aside and schooled me on the ways of periods and sex. Clearly they left a lot out of that discussion. At this point, 43%, I decided that I didn’t care any more. I just needed to see them get back to their base.

Kell comes with his own issues as well. Apparently he was married once and had his marriage ruined by being a SEAL and thought he’d never be in a relationship again. But his tune changes rather quickly, when, after a night of sex he tells Leah that he wants a relationship with her. Perhaps they spent time off page getting to know one another, maybe I missed that page. I had no idea how their feelings so quickly materialised but we are in a series of caves and maybe there are other rules in play. The sex did live up to its descriptor of being steamy, but you have to get to almost half way for it to happen. In the cave Kell is polite to inquire about her status, Leah in a whisper says, “I’m on the pill. It’s okay.” Clearly Chief Warrant Officer Leah was fully prepared and carried her birth control in her flight suit and managed to take it during the five days she was in the cave. Even though Kell is a trained medic and should know that the antibiotics he gave her on day one pretty much negate the pill, they did the deed ungloved. It’s a cave, there are no condoms in caves!

Overall, I did not enjoy this book. I found several distractions with the writing style: several abrupt shifts in POV, paragraphs where both Leah and Kell were speaking. I had to backtrack several times to understand who was talking. In the hero POV he referred to himself both as “Kell” and “Ballard”. I found some inconsistencies with time. There were so many characters and info dumps of their information. They probably relate to previous or upcoming stories in this series, but I found them to be irrelevant space fillers. All the conflict was external to the H/h and was resolved neat and easy. Leah and Kell deserved a better story.