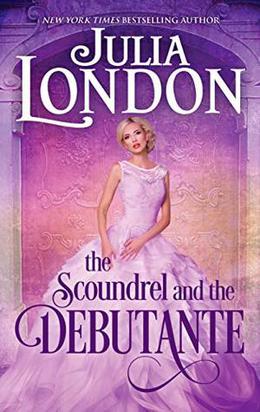 Don’t you just love an impetuous, mischief loving heroine? Especially one who has been given up for a spinster despite her rather delightful countenance? And don’t you just love saying “rather”, and “gosh” and “splendid”? I certainly do, and thats what makes this ‘ode to everything English and splendid’, a rather wonderful romp through the English countryside. The scandalous and daring romance of Prudence and Roan takes us through dangerous inns and gorgeous country houses of the truly rich and famous in regency England, before making the voyage across the pond to good old America where their love finds it’s glorious and heartfelt conclusion.

Sponsored links
Julia London does a rather splendid job of drawing us into the everyday world of Prudence Cabot and the scandals that have made Prudence untouchable on the marriage market. Poor Pru’s two older sister’s pulled off some wickedly devious shenanigans to snag themselves wealthy, titled husbands (not to mention grade A romances, which I’m sure were featured in Julia London’s earlier books), and this has left poor Pru with nary a suitor in sight.

As the book plays out, one realizes that the social rules of old England society really sucked if you were a woman that had any type of spirit or sense of adventure, to be blunt. That a perfectly delightful young lady would be left ‘unmarketable’ to any man of ‘gentle-birth’ if a whiff of things untoward were detected in her family, is to our standards, absurd. If that were the case, no one in my immediate or extended family (or yours I’m sure), would have been allowed to wed! What’s worse is that Prudence knows that she is about to become a spinster at the end of the season - dependent on the kindness and financial of her step-brother and brothers-in-law: a wholly dismal future over which she has very little control.

Our beloved Pru, fully aware and almost at the point of depressingly accepting her rather dismal situation in life, finds herself alone (gosh!) in the presence of the delightfully tall, broad shouldered and decidedly splendid Roan Matheson. So she decides to take a risk, knowing that this one moment is about all she has to look forward to in life (by way of adventure, excitement, and attraction) and takes her fate into her own hands. Pru scandalously ditches her scheduled carriage-ride and hops onto the public coach (gosh!) to accompany the rather charmingly lost Mr. Matheson.

Over the next four days, Roan and Prudence take their adventures in pursuit of Mr. Matheson’s awol sister Aurora, and conveniently find themselves alone a good deal of the time. That they also find themselves splendidly attracted to one another is a rather splendid distraction that Roan has not expected. Ms. London does a wonderful job bridging the time appropriate English rules of male-female interaction with our present day need for some good fucking. And this she does with aplomb. Yes, I said aplomb - I told you I like English - romance-y words! Gosh! Ahem, now back to the review. Roan’s viewpoint is presented in a very candid way, and we are privy to his salacious thoughts of bending Ms. Cabot over and admiring her creamy round bottom before doing some other rather wicked things. Ms. Cabot’s journey from a curious virgin, to a very satisfied, knowledgeable woman of the world thus begins to unfold.

There is a particularly memorable love scene when both road weary and dusty travelers decide to wash off in a pond. Never has a white cotton chemise become so artfully a floating tool of not quite so innocently-intended seduction. (Made me want to go swimming fully clothed just to see if I could pull it off!) Roan, fully aware of Pru’s virginity, and also aware to some extent that taking said virginity would compromise her badly in her social circles, gallantly pulls out and ejactulates in the pond instead of risking Prudent’s future by getting her pregnant. It’s a very forthright yet tender scene as their awareness for each other and of their impending parting becomes evident.

It’s very important that the reader knows Prudent is a completely willing and active participant in her own seduction. She is no greenhorn who is overcome with the first flushes of sexual awareness. Her view is that this is her chance to know the touch and feel of a man before the social gates of spinsterhood shut and forever relegate her to the companionship of other, older spinsters. That Prudence is able to keep her mind focused on this and not succumb to the sheer emotional cliff she has jumped off of is quite the thing. At 22, I wonder how many of us would be able to separate sex from emotion. But do that Pru must, or forever lose her heart.

Julia London puts forth some remarkably interesting comparisons of the ‘arranged introductions’ the haut-ton uses to secure marriages within the upper classes and the arranged marriage that Roan himself has contemplated and reached an ‘understanding’ about in his home country of America. Roan’s family has immense wealth in building companies and his father has arranged an advantageous match with a fellow mogul’s daughter. This would cement (pun intended) their family’s fortunes for generations to come. I liked that Ms. London threw this curve ball into the game, as it forces Roan to examine and clarify his ideas about marriage and love and family obligations, something we rarely see a gentleman do in a romance novel.

Overall, The Scoundrel and the Debutante is a rather splendid way spend a few hours. Once the first three chapters are read (as they are slightly tedious) the story takes off like a horse stung by a bee. Sure, this story has been told over and over again in the realms of historical fiction, but when it’s told this keenly, with humor and plenty of sexy and sexual scenes, well - it’s the kind of book that just takes hold of you as you go along for the wild ride.

This book rates a solid 4 out of 5 stars.