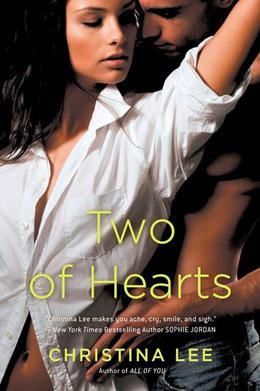 Christina Lee’s Two of Hearts is a sweet, well-written little romance with good plot and some nice dirty bits. When Dakota Nakos’ father is killed, she’s left not only grieving but dealing with a bombshell - he, for reasons all his own, bequeathed ownership of their family casino to his wife, Dakota’s mother, Mrs. Nakos. What would normally be a fairly average inheritance is rapidly complicated by the fact that Mrs. Nakos, while an intelligent and competent woman who has lived on the reservation for decades, isn’t Native American. As conflict builds on the reservation, it becomes apparent that someone is angling for control of the Golden Arrow Casino; someone who may have been involved in Mr. Nakos’ death. Dakota has always been an independent, capable businesswoman, but with her family, her father’s legacy, and the family business all at risk, she’s stretched to her limit; so when US Marshal Shane Garrity, the “one who got away,” turns up and immediately involves himself in the case, she’s caught between relief and frustration, lust and self-righteous indignation.

Sponsored links
Shane and Dakota have a past, and it’s immediately apparent that they’ve been in love with each other for years, despite the separation of both time and distance. Their spark reignites immediately - and obviously - although they both work to deny it. When Shane decides to stay and investigate her father’s death, Dakota realizes there’s no dodging the question anymore. Can they fix the mistakes of their past, or has it simply been too long?

Lee’s novel, overall, is pretty cute.  Our two leads are likeable and well-drawn, and the reservation is populated with interesting and well-fleshed side characters. The murder mystery is well done and the all-important TWIST is actually fairly surprising. (Total side note: why do all romance novels have to have a TWIST now? We’ve all been watching too many crime shows. I feel like every other book I’m reading an oddly sexy novelization of CSI: Heartbreak.) While the side plot acts to initially bring our characters together, it thankfully doesn’t have much to do with their relationship. One of my chief issues with murder mystery romance is that the author usually uses some aspect of that mystery to either keep her characters apart or to inspire them to grind their sexy bits together, and that part always rings sort of false. What part of “someone has just been brutally murdered” gets your panties in a bunch? I’m fairly certain that Sherlock Holmes himself, in the form of whichever actor playing Holmes you think is sexiest, could turn up to find the real killer of my loved one, and the last thought I would ever have is, “this seems like a great time to strip down and see if our sexual chemistry is enough to overcome the odds and lead to a forbidden love!” Honestly, my first thought would probably be, “you seem too pretty to be a competent detective. Could I get Inspector Homely, the eighty-year old British man, on the case? He seems like he’d be more suited to ‘grisly decapitations’ and less inspired by ‘the case of the missing pomade jar,’ if you catch my drift?”

Beyond the murder bits, though, I liked how much of the novel hinged on simple miscommunication. Not two people being held apart by a series of increasingly ridiculous circumstances, or worse, being held apart by really stupid, easily resolved misunderstandings that anyone who had successfully completed puberty could work around - just normal, heartfelt issues like vulnerability and misplaced priorities that we’ve all dealt with at one time or another. It was refreshing and endearing to have a couple that not only had some stupid fights, but worked through them more or less healthily, by figuring out where they went wrong, backtracking, and trying again.

Shane, thankfully, is sexy and good at his job. He’s pretty damn macho, and verges at times on being overly so, but it’s always pulled back before it gets completely out of hand - so he stays on the acceptable side of “sexily assertive” rather than “creepily overbearing.” Dakota, likewise, may represent a worn-out archetype (I’m too busy with work to have a relationship and I’m afraid of my feelings! However will I find love question mark sad face?), but she’s portrayed well enough that it isn’t exhausting, boring, or both. Their chemistry is fantastic, and as a result, their sex scenes, peppered liberally throughout the book, are great. Shane is an exceedingly generous lover, as well, which always helps.

The novel does delve into some of the complications and conflicts of being Native American/Indian in the modern era, but I lack the cultural context to say whether or not it did a good job.  I will say that when anyone starts a novel with a foreword that boils down to, “so I’m writing about a culture that I have no meaningful ties to, but hear me out….”  it’s a mild red flag. A pink flag, if you will. Still, like I said, as a generic white lady, I’m in no position to say if her representation of reservation life is accurate or not, so I’ll leave that for more familiar readers to judge.

All in all, Two of Hearts was a charming little book. The sexy bits were good and sexy, the emotional bits were well done and didn’t wander into soap opera territory, and the setting and subplot was a refreshing change. Not a bad way to get some bounce in your britches for an afternoon or two!