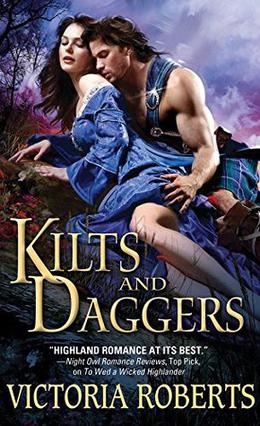 Kilts and Daggers is indeed the kind of book that makes you long for the windswept Scottish borderlands of old and for big, strong, tall men with hairy legs and strong sword arms with kilts that you just wish the wind would whip up and over their heads. Victoria Roberts takes us into her world where high-born English misses meet and fall in love with their rougher, though still titled, counterparts in the Scottish Highlands.

Sponsored links
We meet Lady Grace Walsingham, the second sister of four who have gathered to celebrate her eldest sister’s marriage to a Scottish Laird. Lady Grace is betrothed to the already irritating Daniel, Count or Earl or somesuch, who is highborn boor that barely manages to hide his cringing at the sound of Gaelic. Lady Grace is 19 and a somewhat misguided, headstrong know-it-all, who thinks she can just charge through life doing whatever she thinks is appropriate. Lady Grace is, shockingly, not a very likeable heroine at this point of the story.

Quite abruptly, we are introduced to Fagan Murray, and yes, it does say Fagan. Fagan is the close confidant and protector of the Laird and his home, and as such is given the task of escorting Lady Grace back to her home in England once her stay is complete. His name is a total panty-dryer if I may say so. It’s obvious Ms. Roberts knows her history, and I’m sure that ‘Fagan’ is probably a historically accurate and common name used for men who would have held such a position as the captain of a Laird’s Guard. But, come on! David Copperfield and Fagin’s gang of pickpockets? Hello? Cultural references are strong in my mind and I’m sure for many other readers too. The slight difference in spelling did nothing to ease the connection in my mind the entire time I was reading this book. But I digress…

The fact that Grace and Fagan cannot stand the sight of each other and argue whenever they open their mouths is forgotten when this good idea of Fagan guarding Grace strikes the Laird. No one thinks twice about the arrangement. So when suddenly and out of the blue Grace asks Fagan to show her some of the Laird’s lands, it’s out of character. And when they start to make out like wildcats when they find themselves alone, is also quite the surprise. Their entire journey back to England is also spent fighting or being so turned on by the sight of the other that they end up making out more than once along the way.

The continual fighting from Grace’s end get’s to be a bit tiring and repetitive. I was somewhat expecting Lady Grace to grow up a bit on this journey and lose some of her immature and selfish ways. But, unfortunately, she does not. Lady Grace had somehow gotten it into her head that she wants to become a spy for the Crown like her older sister Ravenna. Despite Ravenna’s warnings and greater wisdom about the ugly side of spying (danger, murder and sleeping with men you find distasteful), Grace just can’t seem to get it into her head that she is not smarter than everyone who ever lived, and as such, she doesn’t have the sense to relay important information back to Fagan and ends up putting their safety in jeopardy.

The only times she becomes remotely likable is when she’s lusting after Fagan or when Fagan is teaching her about the finer points of kissing. She shows her humanity on the journey home, when one stormy night, she finds herself alone with Fagan and realizing she is heading home to a loveless marriage arrangement, asks him to show her love for one passionate night. Fagan accepts and asks her if she wants to turn back, indeed, asks her directly if she knows what the consequences will be. Grace accepts in spite of that and that night becomes Fagan’s lover and love forever.

What Grace foolishly didn’t consider until after the fact, is that the long suffering Fagan is a man of honor and so decides that he will marry Grace since he knowingly took her innocence. The scene between them in the rained out cabin is delightful, definitely one of the highlights in the book. It could well have been fleshed out some more, but the sexy parts that are described are satisfying indeed. As Grace’s freshly realized status as Fagan’s beloved sinks into her mind, Fagan’s task now changes to one of escorting her to England so she can give the bad news to her stuffy betrothed and then return to Scotland for a life of more arguing and sex with Fagan.

Of course, Grace will have none of this. Though she is beginning to understand that her affection (as well as her lust) lies with Fagan, she continually tries to convince herself that she is too high born to be with a lowly Scotsman, and tries to thwart Fagan at every turn. See what I mean about unlikeable? Grace keeps on fighting with Fagan and avoiding him until she is kidnapped. This is the point that the much referred to ‘spying for the Crown’ actions of Grace’s family (including the actions of her sister and her beloved Uncle) take over. Grace’s kidnapping changes the tempo and the pace of the book for the better until the action-packed conclusion.

Now, you’d think being locked in a pitch-black dungeon would teach a girl a little humility. But with Grace, even that takes some time, as she continually shoots herself in the foot with her hot temper and quick mouth. Slowly she begins to understand that self-control can be her friend and might actually help her out if her mess. It might also help her to save Fagan, who has also been caught, as well as help her to admit her new-found love for the man. You can all relax, because this being a romance novel, the headstrong Grace certainly learns her lessons and admits her deep love for Fagan. She has finally, at the end of her foolish, headstrong actions, realized her humility and (thank goodness!) become an honest-to-goodness woman, worthy of the love of the unwavering Fagan.

Overall, Kilts and Daggers starts out somewhat disjointedly, but ends with a rollickingly good action-packed storyline, and even manages to sew the seeds for the next book in the series, which I am sure will be about Grace’s younger sister Elizabeth and her interest in the much older Laird Munro.