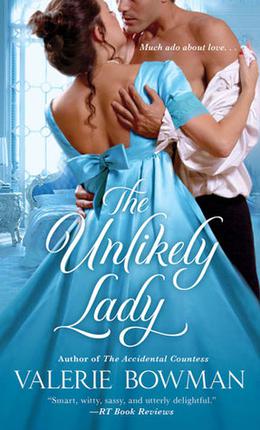 Valerie Bowman’s The Unlikely Lady honestly has everything a Regency romance needs: Avowed spinsters! Intrigue! Scheming! Mysterious pregnancies! Balls! Also, parties where people get dressed up and dance a lot!  While the plot isn’t the most original, it’s well-executed enough that it doesn’t matter and the two leads carry the day to a satisfying conclusion. Jane, the previously-mentioned avowed spinster, has one very simple goal in life - dodging her mother’s pushy, clumsy attempts at matchmaking for one more social season. If she can just make it through, safely unmarried, Jane figures her mother might just give up and leave her to the quiet, book-oriented life she’s craving.

Sponsored links
Unfortunately for Jane’s single aspirations and hatred of social events, Cassandra (one of Jane’s best friends, and a very sweet young lady) is getting married. While Jane would never want to disappoint her friend, it’s obvious that she is less than thrilled about the week-long country estate party surrounding the nuptials. That being said, parties mean teacake, and Jane is excruciatingly fond of teacake. So, off Jane goes, for a week of dances, parties, and celebrations, trusty books in tow.

Garrett, on the other hand, is a jovial, sociable sort of man, despite a wartime secret that he’s still haunted by. His one weakness is an absolute dislike for Jane, whom he sees as unnecessarily confrontational and, while he wouldn’t use the word, bitchy. Her natural temper, combined with her quick intellect, makes her a formidable and frequent verbal opponent. If only his cousin, Cassandra, wasn’t so close with her, she’d be more easily avoided - but what can one do, in polite society, but try and play nicely?

So the weekend begins, and of course, the not only two wind up entangled in not one, but two plots - one well-meaning, the other distinctly more manipulative - but entangled with each other. Hijinks ensue, as they must. The Unlikely Lady hinges on a classic, convoluted scheming society regency plot. While it isn’t the most surprising I’ve read, it still worked and was fun to read. I really enjoyed how much of the story hinged on reading, our characters’ love of reading, and the many, delightful people out there who prefer their books to more tangible company. It was all very Jane Austen and also very nerd-friendly.

Even better, The Unlikely Lady is surprisingly funny, especially when Jane gets her hackles up. I actually stopped once and muttered “ooh, damn girl, YOU NEED SOME ICE FOR THAT BURN?” Jane is just such a great character. I thought I was going to be irritated by her transformation from Avowed Spinster to Lady Madly in Love, but I really wasn’t; it felt right, and tropes are fine so long as they’re executed well. Plus, she’s an avowed and outspoken feminist, which I found delightful.

Garrett is great in a sweet, gentle sort of way, although he keeps up with Jane admirably. He’s just not a super dominating manly man, and I love it. Romance is so dominated by ultra-masculine, possessive guys, and it’s nice to get a break! Plus, he’s all sad and haunted by his past (but not in a whiny way!) and he also turns out to be feminist, so big points for Garrett. A+, sir, even if you do have odd ideas of what should be done to Regency ladies when cravats and settees are both available.

Our dastardly scheming widow was great, and by great, I mean terrible. (Of course there’s a dastardly scheming widow. Was it a rule, in Regency England, that all widows had to scheme? Was there some kind of Secret Society for Scheming Widows that I’m unaware of?) You absolutely hate her quickly and thoroughly but without hating her so much that it’s distracting from the plot. It’s always tough when the villain is so evil that it becomes difficult to focus on the plot anymore. But dang her womanly wiles are obnoxious and it’s so fun to see her get trounced.

My one complaint? The sex sort of threw me off. I know that most of the romances that come out lately are heavy on the erotica front, and I understand it - I enjoy it, even. My knickers get themselves in a bunch just like everyone else’s. But when you’re dealing with Regency high society, this much sexing just isn’t believable, and the level of kink/foreplay/sex acts we have here just ring sort of false. I just don’t quite think tying a lady to a settee with a cravat and going down on her beneath all those petticoats would have occurred to your average waist-coated gentleman. I could see the kink coming out to play down the line, but this jumped the gun. But who knows? Maybe I’m the misinformed prude here and I secretly don’t like to think about our great-great-grannies going to “pound town” (I refuse to apologize for using that phrase) on the first date.

While I’m a dummy for not catching all the Much Ado About Nothing references until they’re spelled out for us at the end, I love what Bowman did here. It’s an enjoyable, well-written addition to a lovely series!