Once Pure (Shattered Past #3) by Cecy Robson 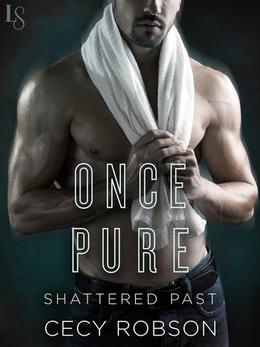 What does it really means to loose ones innocence? Cecy Robson’s new book Once Pure forces us to ask this question. Is losing one’s purity a conscious choice or something that just happens? Is it by the caressing touch of a lover or simply through the act of sex? Can innocence be stolen? Once Pure is part of the Shattered Past series (following Once Perfect and Once Loved) and in this endeavor, we are taken to a place where sweat drips off of toned biceps, where tears trickle out of piercing eyes and where shivers run through chiseled bodies.

Sponsored links
The story is told through the point of view of our heroine, Sofia. This allows us to experience her raw emotions and exhilarating transformations from timid and weak to confident and strong. Sofia is a woman who has been treated very poorly by men. From being the punching bag for her in-and-out of prison father, to surviving a tragic rape to other drug and alcohol fueled exploitations: Cecy Robson doesn’t shy away from writing about the struggles of being a victim and the residual effects of trauma. Sofia goes from being scared to angry to sad in the course of a minute. When she becomes annoyed with being known as “the poor girl who got raped”, this is what pushes her to take back her life and take charge!

Set in a boxing gym in a rough and tough Philly neighbourhood, the book begins with childhood friends Killian and Sofia, meeting after many years apart. Killian hires her to create his gyms website. This is not the kind of hoity-toity yoga pants and juice cleanses kind of gym… this is the kind of gym where grunting and pumping is not out of place (and no I am not just talking about lifting weights). This is also the kind of place where Sofia can develop her strength and spend more time with her childhood crush, Killian.

Picture every underwear model and pro-athlete put together and you’ve got Killian…completely and utterly ripped. He is the perfectly chiseled, Irish-American well decorated boxer who happens to have a temper but also a heart of gold. Whether it is his wavy jet-black hair, penetrating deep blue eyes or his Celtic cross tattoo that travels down his spine and outwards to his shoulder blades that makes him a ladies man or the fact that he is the perfect combination of sexy and romantic, I’ll leave you to make that decision. He is the kind of man who knows how to how to treat a woman and who also knows how to touch a woman. By the time I learned he has been secretly pining for Sofia since he was a young boy, I was a goner. This was just one more thing that added to the list of things to love about this character...

I found Sofia’s character to be refreshing and current because she is different from many of the “pure” and naïve Snow White-like characters we know. The protective men in this book fail to shield her and in reality they don’t have to. Killian and his sister begin to teach her how to box and she becomes the female version of the hulk… physically and emotionally strong. (I pity the fool who tries to attack her again! This girls got game!) Also her past (drug- enhanced) promiscuity makes her atypical because while she has had sex with many men, she has never explored a man’s body, nor been pleasured by one. So is she a virgin? Is she pure? This book made me come to the realization that perhaps ones physical virginity can be violently stolen, but we can take charge of our body and let go of our emotional innocence when we want too. It is our choice to be loved and Sofia chooses to be loved by Killian.

The sex scenes start out at first hesitant and timid with lots of trembling, but eventually it turns into kinky foreplay. I advise you not to pay much attention to the cheesy dialogue along the lines of…”can you teach me…show me how to touch you”… These snippets reminded me of the adult version of “I’ll show you mine if you show me yours” but, keep reading on.

Just as Killian begins to unlock Sofia’s sexual desire, this is where we really begin to cheer our girl on. Sofia learns how to pleasure and be pleasured all with the help of a little bondage… a neck tie. Killian suggests that she tie his hands back so she is free to explore his body. And oh does she ever! After many, and I repeat many rounds of “innocent” exploration when Sofia finally has full on sex with Killian, it is a scene that will make you feel like you yourself have worked out for hours (in a good way) and yes that afterglow will show on your face.

As for the other characters, (mostly friends and family members) they only are distraction from the love story. It is hard to shrug off the catalogue of stereotypical characters that reside in this book. There is Sofia’s forlorn and sad mother (whom we never meet) that thinks her “innocent” daughter is destined to become a nun. Sofia’s overprotective, Cuban brother named Mateo (who quickly reminded me of Bernardo from West Side Story), his sassy wife Evie (Anita?) and then there are the Roman Catholic Irish-American boxing-loving O’Brien family of what seems to be twenty loud, rough and tumbling brothers and one equally loud, rough and crass sister Erin (A.K.A. Wren). The lottery-obsessed Irish mam and yes one of Kilian’s brothers is a police officer… but once we get over this we can focus on the love story and the action (besides this book is about forgiveness, so I guess I can forgive Cecy Robson for this).

As the theme of purity flows through this book, we learn that in life you have to fight for understanding, forgiveness and even love. This book may read like one you have read before, but at the heart of this book there is a heroine who will not be defined by exploitation. She will not be shamed. Recent conversations of rape and sexual assault have been shared over social media and many campaigns (like Slut Walks standing up for those who are slut shamed) have been shouting out “enough is enough”! Sofia is just one of those women echoing that cry and I give Cecy Robson credit for tackling this difficult subject matter while still entertaining us with the mix of romance, boxing fights, steamy sex- in-the-shower scenes and savoury secrets.