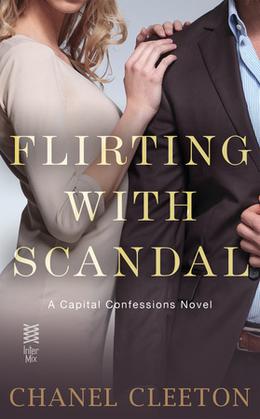 Jackie Gardener is an up-and-coming political consultant with an edge - unlike so many of her competitors, she was raised with an intimate knowledge of how D.C. really works. Backhanded deals, misbehaving politicians, the ever-present scandals; Jackie’s heard it all, thanks to her mother, a more-or-less professional mistress of men in power. What’s more, Jackie’s father (although neither has ever acknowledged the fact) is a political powerhouse. Young Jackie’s fascination with the absent patriarch, combined with her mother’s successive affairs, led her to eat, sleep and breathe politics; and after landing a prestigious consulting internship, she’s on the verge of finding the success she’s always craved.

Sponsored links
William Andrew Clayton, on the other hand, has been raised in the lap of luxury. While he’s the golden child of a political dynasty - grandson to a former Vice President, for starters - Will has been kept far from the political underworld that featured so largely in Jackie’s upbringing. Handsome, well-educated, and principled, Will is certainly a far cry from the politicians Jackie grew up around.

Will is running for Virginia state senate; Jackie is launching her dream career. In a city where even a trace of scandal can ruin someone for life, a single careless moment is all it takes. So it’s no surprise that, when the two meet, they’re equally as intrigued as they are wary of one another. Attraction is what it is, though, and before they know it, they’re both in too deep. (Ha!)

Chanel Cleeton’s Flirting With Scandal has all the ingredients of a compelling romance. Politics, intrigue, sex; hell, I grew up near D.C., so it even had a bit of hometown nostalgia to it. Unfortunately, even in Cleeton’s previously talented hands, those ingredients don’t wind up amounting to much. While the basic plot is well-planned, and the characters sympathetic, the novel simply fails to deliver in a lot of the ways that count. On top of that, the actual writing - grammar, structure, flow - is not great. The transitions between points of view are jarring and often unclear, and while the dialogue was fine, the action was often stilted and awkward. While I eventually stopped noticing it (in, say, the way you eventually stop noticing a particularly egregious accent), it bears mentioning that this novel could have used much more time with a talented editor and a Big Red Pen.

My other real serious peeve is Will. Unbelievably handsome and charming? Sure. Endlessly kind and patient? Absolutely! Giving long, expository speeches about his own emotions? Ah… not so much. The man is almost irritatingly verbose about his feelings in a way that I'm not sure I find believable. Not because he's a man, but because I have never met someone that in touch with (and then that talkative about) their own psyche. Never. Ever. I've never met anyone who spouts romantic gibberish that frequently, either. I get that it's a fantasy, but how could you even take someone like that seriously? “Honey, I realize that you’re upset, but as the anger and the evening sunlight catch the tiny highlights in your eyes, I’m reminded of my boyhood, and the way my interpersonal relationships were marred by an incident that caused me to temporarily distrust maternal figures. I feel this may have some impact on the way that I express intimacy…” I appreciate men who can communicate, but there is a limit.

Flirting with Scandal reminded me a lot of the show Scandal, possibly crossed with The West Wing, if the characters from both were simultaneously less witty and more prone to bouts of hardcore sex scenes in office bathrooms. This isn’t to say that Will and Jackie don’t come off as bright; it’s just that, for all the comments about Jackie’s intellectual prowess, the overall impression is less “terrifying, Olivia Pope smart” and more “for such an emotional mess, you’re pretty competent!” In all fairness, though, once Jackie stops being weepy, puts on her ass-kicking big girl panties, and gets some shit done, she’s much more of a force to be reckoned with.

The lust, at least, is believable, and the sex was well written enough to hold your attention. A part of me thinks that Cleeton was going for some serious subtext with this novel - is passion ever worth risking your career for? Are there any true “damn the consequences” romances? - and to a certain extent, she nailed it. You absolutely believe that, in the moment at least, these two otherwise intelligent people are so intoxicated by one another that they forget everything except for the urgency of physical need. While the actual mechanics are somewhat clumsily written (have you ever suspected that something was, ah, “typed one-handed”?), the content is there and it lands well.

All in all, Flirting with Scandal is a decent little novel; despite some fairly major flaws, it’s still an enjoyable plot, with engaging characters and some pretty hot sex scenes. While it requires some patience, the conclusion is both fun and satisfying enough that it would be worth a read - just be warned that, if you’re anything like me, you’ll follow the book up with a mini-marathon of Scandal, if only to remind yourself how steamy, forbidden political affairs should really be handled.