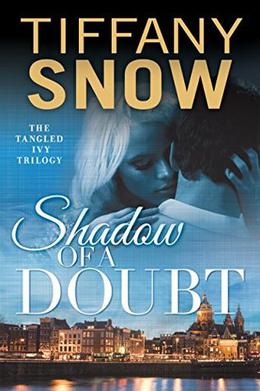 Tiffany Snow’s Shadow of a Doubt is the second installment of her Tangled Ivy series. Despite a painful personal history, Ivy Mason is an independent, intelligent, capable young woman - which is why her friends are confused and sometimes downright disdainful of her relationship with the handsome, oft-absent spy Devon Clay. While Ivy spends her days going through the motions of working, socializing, and running errands, she spend her nights wondering, waiting for his infrequent but passionated visits. She knows she shouldn’t be placing all her hopes on a man whose job makes it impossible for them to have a normal life, but as she tells her friends, she just can’t help it; she loves him. She’s resigned herself, more or less, to a life in which the one thing she truly wants will always be a little out of reach. So she spends her days going through the motions, and spends her nights waiting for Devon to appear. Until one night brings a visit that neither she nor Devon could have expected, and Ivy’s life begins to spin out of control.

Sponsored links
Shadow of a Doubt is, certainly, a compelling read. It ought to be; Ivy and Devon are so preoccupied dodging the constant attempts on their lives that they barely manage to squeeze in the sexy times. Honestly, the novel is gripping while you’re reading it, but in the same way that a soapy TV show is gripping while you’re watching it. Every time they start to conclude one plot line, another one begins because someone has been BETRAYED or HE WAS SECRETLY ALIVE THE WHOLE TIME. I stand by my use of caps there, because every time it happens, you can practically hear the background music going “BUM BUM BUUUUUUUUM!” as a character dramatically strides into view. Sure, it holds your attention, but it’s exhausting. Snow honestly could have drawn all of this nonsense out into more than one book (and more than one week, from the character’s perspective). It would have been just as compelling and significantly less hysteric. In Snow’s defense, though, I will say that, just like any convoluted, twist-heavy plot, it’s difficult to put down while you’re immersed in it. It’s certainly a page-turner.

Of course, with all the ridiculousness, the actual romance is almost completely sidelined. When Ivy and Devon do manage to take a break from international murder plots long enough to rub their fun bits together, it is pretty sexy; while not as overt or detailed as a lot of novels seem to be recently, the scenes are still a turnon. A hot, blue-eyed English superspy? We’d all fall for that. We’d throw ourselves at that repeatedly until we couldn’t move or speak for lack of electrolytes. I am not uncomfortable admitting to this fact, because suave, handsome Englishmen who actually have chins are a hot commodity, and one should snap them up immediately. (I’m sorry, England; but you have a national chin shortage, much the same way that America has a shortage of well-built men who can resist the urge to survive solely on pizza and hot wings.)

The problem is that, while I realize that most of the emotional background for Devon and Ivy’s love affair is covered in the first novel, an absentee boyfriend who only seems to arrive when someone is intent upon murdering them both is a difficult relationship to root for. With all of the drama Ivy is put through, I started quietly hoping for her to just give up entirely and go date a nice accountant or something. Yes, love conquers all, but how many times do you have to be kidnapped by mysterious and all-knowing shadow organizations before you start to long for a mediocre evening at The Olive Garden?

I was, however, pleased with the overall concept that Ivy doesn’t want men in her life who think she needs “saving.” With her background of abuse and the obviously traumatic events of the first novel, it would be easy for this novel to turn into yet another “damsel in distress” story. To Snow’s credit, Ivy is anything but a wilting violet. She’s resourceful, calm in a crisis, and generally refuses to allow herself to be coddled. Still, while she’s far from completely incapable of fending for herself, she always comes just shy of actually saving herself--some dude is always there to step in. I’d love to eventually see Ivy actually save the day rather than being scooped up by one of her (multiple) Big Strong Men.

Still, there’s hope yet! Without delving into spoiler territory, Snow concludes Shadow of a Doubt with a clear setup for the next novel. Barring unforeseen complications, we should be getting another chapter of Ivy and Devon’s shenanigans, and after two novels of Ivy becoming increasingly self-sufficient, I wouldn’t be surprised if the next installment is when Ivy finally gets to come into her own. At this point, she’s almost turning into a neophyte spy in her own right. Think of how great it would be to see Ivy as a little more badass, a little more confident, kicking people in the face and generally being a self-sufficient partner for someone like Devon, rather than a beautiful but constantly endangered liability. With her evolution thus far, I would love for Ivy to put on her big girl boots and start really handling business--and the plot can be as hectic as it wants. Give me a woman who solves her own problems and has a sexy superspy boyfriend, and I promise not to complain even if you start throwing in secret evil twins. I’ll read the hell out of that book, and any others you can give me.

All told, Shadow of a Doubt is an entertaining, if at times slightly overwhelming, piece of work. I did enjoy it, twists and all, but I’m more excited for where it’s leading than where it’s been. If Ivy finally gets to take her place at center-stage, leading the action instead of being swept along by it, I can’t wait for what comes next.