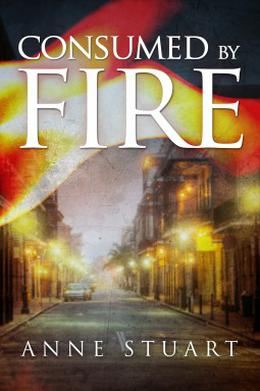 If you pick up Consumed by Fire in the hopes of a calm, meandering story, then put it right back down. Buckle up, chickens, for there are more twists in this story than a road through rural Ireland.

Sponsored links
Consumed by Fire is the story of Dr. Evangeline Morrissey, a university professor who researchers dilapidated and abandoned structures, and James Bishop, an assassin for a super-secret international organization we’re told protects democracy and calls itself “The Committee”. We meet the pair in Italy at their first meeting, directly after James has killed an evil priest with his partner and Evangeline had accidentally stumbled upon the scene.

However, nothing to Evangeline seemed amiss – she believed the priest to simply be sleeping. James’ partner advocated for Evangeline’s murder anyway – a tying up loose ends sort of move – but James opted for seduction of their potential eyewitness instead. What follows is a steamy passage including shower sex, a candlelit dinner and a marriage proposal! James’s POV narration tells us that he must marry her to protect her, a tidbit he chooses not to share with Evangeline.

We get the description of the marriage in retrospect, as Evangeline wakes up in an opulent hotel room in Venice to a MIA husband and stolen diamond earrings. And that brings us to page 68. The story then picks up 5 years later in southern Canada as Evangeline is attempting to cross the border back to the United States. She is reunited – much to her chagrin it must be said – with her erstwhile husband as they make their way to New Orleans for purposes of his super secret job.

That’s where I’ll stop with the plot description, for anything else would be getting into spoilers. Suffice it to say that those aforementioned twists come at the perfect points in the story. Just when Stuart has lulled you into believing you know exactly what is happening, a detail emerges which disrupts your assumptions completely. I read this in two sittings – I had to know more. I had to know what the Committee was, I had to know if either one of them was ever going to be honest with each other, I had to know if the dog in the story was going to survive! (I am a huge fan of dogs and any story where harm comes to one is on my no-fly list.)

The mystery was satisfying and the sex was insane. The stamina and creativity will leave readers sufficiently hot and bothered. The instant attraction trope is in full-force here; Evangeline admits several times that she’s never quite sure why she fell for James so quickly and so deeply. In the years they’re apart, she embarks on a journey of sexual cleansing, so to speak, which doesn’t work nearly as well as she wishes. James reports being similarly obsessed – and similarly mystified as to why.

There is only limited emotional intimacy between the two of them and this is my chief complaint. I just didn’t buy these people could actually work in a HEA the way the book wants me to believe – they don’t really know each other. They know each other’s bodies (VERY WELL) and that’s something, but there was doubt in my mind about how guarded they both are with each other. I prefer my romances to include more talking and conversational vulnerability than this one did, but readers who do not feel similarly will no doubt be happy with this book.

Even thought Stuart is a “grandmaster of the genre” (according to her bio and website), this is my first encounter with her. I’m only beginning to dip the toe into suspense, which probably explains my non-exposure. This is the beginning of a new series for her and there is one character in particular in Consumed by Fire that I hope becomes a protagonist soon. The dedication mentions a previous series – her Ice series – and I would assume fans of that series would be fans of this one.

A few quick trigger warnings: Evangeline was raped in her past. While the event does not occur in the narrative of the story, it is described. Additionally, an abduction features heavily in the plot itself and this book is not short on bloodshed. It doesn’t quite reach the level of an episode of Game of Thrones, but it flirts with it. Lots of knives and guns and angry people. Oh, and an Italian mafia family.

As an academic myself, I am often rolling my eyes at descriptions of professors in books. Stuart does a good job here, not wandering too far away from reality and certainly not distracting to the story.

Recommended for fans of suspense and steamy sex scenes. Not recommended for fans who get frustrated with emotional conflicts that could be solved with a conversation or anyone who gets slightly squeamish at descriptions of violence.