Back to You (The Hurley Boys #3) by Lauren Dane 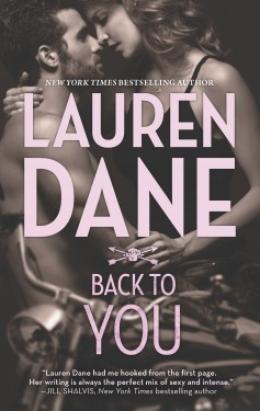 Sponsored links
Back to You, the third installment of Lauren Dane’s Hurley Brothers series, is a surprisingly sweet novel that follows the youngest Hurley brother, Vaughn, as he struggles not to find love, but to get back the love he’d had. After leaving his wife and family to indulge in the rock and roll lifestyle for almost eight years, Vaughn has grown up; and as a result, he’s realized that what he wants isn’t booze-fueled nights and empty sex with groupies anymore. He wants his family back--and in true Hurley fashion, he intends to go get what he wants.

Of course, it’s never as simple as Vaughn wants it to be. Kelley, his ex-wife and mother of his two beautiful little girls, is engaged to another man. While she’ll acknowledge (to herself, if no one else) that her attraction to Vaughn hasn’t faded over the years, he’s not what she needs anymore. She’s a parent, a business owner; a far cry from the restless model Vaughn met all those years ago. She doesn’t need a man who needs parenting, she needs a man who can help her parent, who can lighten the load during the long days of homework and packed lunches, bedtime and bathtime, school meetings and dance classes. Ross seems like a good bet. A safe bet. But when an emergency brings the family together for the first time in years, Kelley wonders if she’s made the right choice.

What strikes me most about Back To You is how… mundane it is. Sure, she’s a model and he’s a rockstar, but it’s a pretty negligible part of the plot. You could turn Vaughn into an uncommonly sexy plumber, and Kelley into a gorgeous but overworked nurse, and the novel wouldn’t be changed in the slightest. Mostly, the story is just about two people who married far too young, weren’t emotionally mature enough to give their relationship a proper shot, and have decided to try again. All of the conflict in this novel comes from the same interpersonal challenges most of have faced at some time or another--the challenges of keeping a divorce amicable for the kids, the conflict and misunderstandings that so often occur between family members, the eternal struggle of trying to get on with your in-laws. As a result, all the emotions in this book are incredibly genuine. It’s not often that you have two romantic leads who already have children together; but watching them co-parent is some of the most down-to-earth actual romance you could find. It’s wonderful and endearing.

The kids, actually, were my favorite characters. It’s nice to see a fictional family that’s functional and loving without being too saccharine. Kids who are adorable and loveable, sure, but also irritating and bratty at times. You know, like real kids are. This isn’t really an issue in romance, because as I said, there aren’t usually tons of kids floating around in romance novels, but in sitcoms and movies I’m sort of tired of children who are just ultra-precocious, wacky punchlines. All children are occasionally horrible. This is a fact of children.

Kelly is just great. A kickass, capable, smart-as-shit mom who has her vulnerabilities and insecurities but still keeps her world and her family together. Again, you don’t usually have romance novel leads who are moms, and I loved it. I found her way more interesting than a young, unencumbered ingenue, because Kelly is mature and has done the wilty, fall-all-over-yourself immediately because of a man bullshit before. She has more on the line and she’s absolutely not interested in compromising on the things that count. Watching her work to try and turn her children into good people--and all the little battles that occur on a day-to-day basis as a result--is more engaging than any single girl asking for the umpteenth time if her guy is “the one.”

A side note, though: the exploration of Kelly’s troubles with food and body-image were interesting, but I WOULD NOT recommend this novel for anyone who has ever had an eating disorder. Don’t do it. You’ll wind up in trigger-town, population: you. For someone who has her fair share of insecurities about weight (who doesn’t?), Kelly’s issues were written so realistically and thoroughly that I actually had a hard time not empathizing myself into a minor self-confidence crisis. It might be unfair to pick on a novelist for doing something too well, but there it is; this one’s a tough read if you have problems with self-image.

Vaughn is less of a novelty; romance is full of men who have royally f*cked up and have to make up for it in some fashion. It’s practically a trope. Still, as a portrait of a man making up for the immature mistakes of his youth, he’s believable and sympathetic. As a father, though, Vaughn shines. Much like Kelley, Vaughn is past needing a fairy-tale romance. He wants a stable, functional relationship with his family, warts and all. It’s sexier than you’d think!

Which brings us, inevitably, to the sexy times. Good golly, Miss Molly, the sexy times! They’re FANTASTIC. The sex is so. damn. good. Even punctuated by reminders to lock the bedroom door to prevent interruptions, It’s a turn-on. These characters not only have incredible chemistry, they have maturity and experience. This isn’t a female lead reminding you over and over that she’s “just never felt this way before,” this is two people who already know each other intimately and are reconnecting on a different level. It’s wonderful.

Overall, I found the novel sort of comforting in its simplicity. No TWISTS, no murder plots, no former lovers enraged to the point of violence, none of it. I didn’t realize how much I’d been trained to expect my romances to “jump the shark” until, part of the way through this book, I started convincing myself that every character was about to reveal a DARK BETRAYAL or someone was going to pop up out of nowhere and attempt to murder our heroine. Nope! Just feelings. Real, human feelings being explored in ways that are difficult, and messy, but worth it in the end. You know, like actual love, in the real world. It’s a compelling and absorbing read, and I recommend it highly.